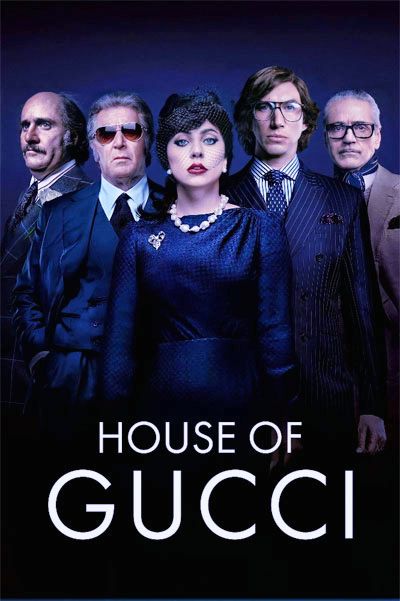 Gucci is undoubtedly one of the best-known names in world fashion, but if you need to learn the history of the noble house, then this 2021 movie is for you.

Overlooking the introduction of various characters, the first real problem arises when Rodolfo, owner of half of the family empire, finds out that his son Maurizio wants to get married.

Unfortunately, according to the wealthy tycoon, this girl, Patrizia, is not up to their caste and warns him that he will erase him from the inheritance after marriage.

They still marry and have a relatively happy and comfortable life, even without the Gucci family’s mountain of money.

However, the desire to be part of the fashion elite is too strong, so they approach Uncle Aldo, who seems more willing to accommodate them, unlike the adamant Rodolfo.

With remarkable cunning and patience, Patrizia and Maurizio cultivate family relationships by deceiving their cousin Paolo.

Indeed, he naively delivers compromising documents to them that send Aldo to jail, thereby obtaining 100 percent of the Gucci property.

At that point, the couple has the entire family empire in their hands, and they decide to relaunch the brand with considerable changes in the company.

At the same time, what is left of the family begins to fall apart when Maurizio starts dating another woman.

Patrizia cannot stand the betrayal and, even less, the idea of ending up out of the running of the company, so she decides to kill her husband by recruiting some thugs.

The final act of this high-fashion tragedy unfolds as those already familiar with the news pages, with the Gucci brand ending without any family members behind it.

Wealth and cruelty in a fashion way

Ridley Scott returns to Italy after All the Money in the World, another story that painted a ruthless portrait of one of the wealthiest men ever, Jean Paul Getty.

Picking up where he left off with his analysis of these multibillion-dollar castes, in 2021, this brilliant movie sinks the blade where it hurts most in the heart of the chaotic house of Gucci.

Of course, the technical level of the production is never in question, reviving the tumultuous 80s and 90s of Italian high fashion.

So get ready for the enormous elegance of the interiors and clothes, which couldn’t be any different given the high-class signature in the movie’s title.

Just as the lavish apartments and costumes of the characters are unique, they are equally horrible in their total lack of empathy and greed to have complete control of the family.

Being rich does not mean being a better person at all, far from it, because when life has given you everything, all that remains is to seek more respect and power ever.

So the mania for greatness and the desire for control will destroy every member of the family, one by one until there is nothing left but Gucci’s name on their products.

I read some reviews criticizing this movie, especially the second half, saying that they did not like how the story ended.

That is an odd complaint considering that this is a biopic, exaggerating some situations and dialogue for cinematic awesomeness.

But having said that, we still remain in the realm of a cold chronicle of what happened, so I wonder what those disappointed expected.

Did you think that in the end, Maurizio Gucci survived and was just a smear shot like in John Wayne movies?

We are all the fabulous Gucci

As usual in Ridley Scott‘s movies, the cast is always top-notch, and this 2021 House of Gucci is definitely no exception.

I might surprise you, but among the big names on the cover, Lady Gaga was the one who most impressed me with her performance.

In the role of Patrizia Reggiani, the singer and actress flaunt an unusual beauty that is perfect for this character, with complete catharsis with this woman who closes the family tragedy for good.

Adam Driver often seems a secondary character by her side, even though he is the young millionaire scion Maurizio Gucci, awkward and almost clumsy in front of those in charge.

But his behavior will change dramatically when the money starts rolling in, and there is no one between him and Gucci’s dominance.

It seems almost redundant to emphasize the skill of this actor, who has never let me down so far and whose superb Paterson, directed by Jim Jarmusch, I recently recommended.

Jared Leto is quite unrecognizable, disguised as Paolo Gucci, but perhaps this departure from his usual sex symbol appearance made me appreciate his performance more.

However, the actor is only really at his best when he is in the presence of a terrific Al Pacino as his father, Aldo Gucci.

Their dialogues are genuinely among the best in this movie, perfectly describing the complicated relationship between the parent and the son, who is not exactly the smartest in the family.

Finally, Jeremy Irons is also on his usual level of perfection as the tyrannical Rodolfo Gucci; indeed, he is so good that I would have liked to see more scenes with him.

After all these names and all these words, do you need anything else to rush to see this movie?

I hope you enjoy it as much as I did since, as mentioned, I have read many mixed opinions. Let me know in the comments so I know whether you want to thank or curse me for wasting your time.