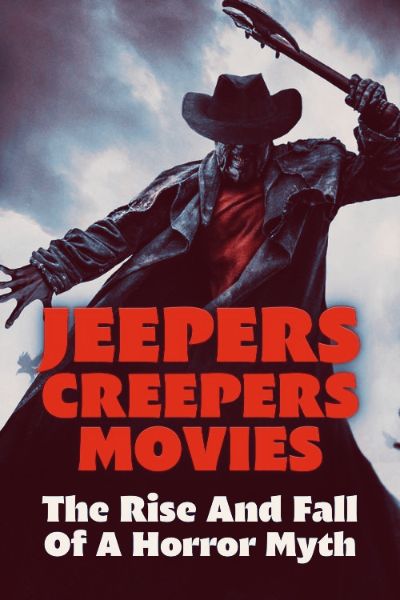 Halloween has now passed, but there is nothing to stop us from prolonging the vital horror thrills of this holiday a little longer with some movies that I have always particularly enjoyed and of which the latest installment was released this year, Jeepers Creepers.

This saga was born from the mind of Victor Salva, a troubled boy whom the great Francis Ford Coppola discovered and bet on when he was still very young.

Although his talent is unquestionable, the director was later left to his own devices after the sex scandal that permanently annihilated his career.

The Creeper is his best-known creation, quickly becoming a horror icon alongside the famous Freddy Krueger, Michael Myers, and Ghostface.

The legend about this incredible and unstoppable monster is as simple as it is terrifying: every 23 years, for 23 days, he wakes up and has to eat.

Eat what? Obviously, all of the protagonists in this saga’s movies futilely try to tear him apart in every possible and imaginable way without succeeding.

Indeed, the Creeper eats people and uses their bodies to heal whenever he is injured. So he replaces his legs and arms, eyes, and, as we will see in the second chapter, even his own head when they decapitate him.

To make matters worse, even his horrifying arsenal is forged from human components, creating daggers, spears, and crazy ninja stars from the bones and teeth of his victims.

We know nothing about the origin of this demon, who may once have been human and then became a murderous monster over centuries of slaughter.

What we do know for sure is that it chooses its victims by smelling their fear, so hold your nerves if you don’t want to become another of the Creeper’s grisly trophies.

The Creeper’s spooky adventures begin on the desolate roads of the American countryside, where a brother and sister travel by car on their way home to their parents.

After a long time, the two are happily discussing their lives and their family when the silhouette of a strange van appears in their rearview mirror.

This starts chasing after them, splaying them out of sight, then overtaking them and disappearing over the horizon.

Thinking only that it is an overbearing driver, they return to the road without a second thought, only to find the same van parked in front of an uninhabited church.

There they see a strange figure in a raincoat and hat dumping something wrapped in sheets, shaped ominously close to that of a human body, into a tube.

From that moment on, it is an endless struggle for them to survive, trying to alert the police, who, however, will prove helpless against the devastating supernatural force of this monster.

As I have already mentioned, Victor Salva creates a blend of horror, action, and fantasy that marks the birth of a new movie myth.

The on-the-road adventure moves from a full-speed chase to chase scenes with spasmodic anticipation of a constant threat that hesitates to show itself.

When we finally see the Creeper, its brutality unleashes with all the demoniac power just risen from the depths of the underworld.

Humans can injure him, shoot him or run him over with a car, but he keeps coming back by eating his victims with whom he reassembles his body.

Jeepers Creepers is an absolutely unmissable milestone for horror movie lovers, which will dream over and over again of the eponymous song croaking from an old record player along with the heartrending screams of the monster’s latest victim.

Two years later comes the sequel to this saga, continuing the story precisely three days after the last massacre of the previous movie.

It all begins with the Creeper taking away a little boy playing in a cornfield while the family can do nothing but helplessly watch the abduction.

At that point, the father and his brother pursue the monster, hoping to find it before the last 23 days in which it feeds before it returns to hibernate for another 23 years.

Meanwhile, a school bus is returning to town with the local young basketball team on board.

Suddenly one of the wheels explodes, and the group finds itself stranded on the road in the middle of nowhere.

Obviously, it was the Creeper to cripple the vehicle, as these boys soon discover as they try to venture outside.

He brutally kills their teachers and the driver on the tarmac as they take refuge in the bus, asking for help by radio.

The kidnapped boy’s own family will respond as the monster stalks through the dykes sniffing fear with which it chooses its prey as always.

Jeepers Creepers 2 takes the winning formula of the first chapter to the next level while remaining a low-budget movie of not even $20 million.

The group of boys works well by not necessarily always being constantly on the same side, instead splitting up more and more as the fear of death takes over.

Excellent then is Ray Wise, an actor known since the days of Twin Peaks who here plays the fierce father of the first victim in this movie.

It is the chapter of the saga I most appreciate, with an ending open to all possibilities.

A full 14 years pass before the arrival of Jeepers Creepers 3, which stands temporally between the previous movies.

It begins precisely when the first chapter ends, in front of the police station ravaged by the monster in the finale.

Suddenly an armed group of strange individuals arrives, all relatives or friends of the Creeper’s victims, who have decided to fight together to flush him out and kill him.

First, they need to secure his old van, which has already proven that it is not just an inanimate object but is as deadly as its owner and can defend itself.

But the Creeper has no intention of abandoning it, so he attacks the convoy transporting it to the depot, retrieving it, and killing the escorting officers.

The next day he is back aboard his famous rusty BEATNGU vehicle, preparing for the final days of his body raid before going back to sleep for another 23 years.

Storming a horse breeding ranch, he sniffs the fear of his prey in the air and decides to kidnap a young girl who was there on a simple errand.

At that point, the police and Creeper hunters put up a united front, going to a local psychic who could show them how to defeat this bloodthirsty demon.

The public reacted with great anger and outrage at this third installment of the saga, slaughtering it mercilessly in any reviewer’s comments.

We certainly notice sometimes uneven strange editing cuts between scenes due to the many production problems. Yet, it is still a horror film worth its weight in gold against most of today’s competition.

The Creeper continues to be a formidable killing machine, saying goodbye as we all do to director Victor Salva probably forever.

If the third Jeepers Creepers movie had slightly wobbled while maintaining a decent level, the latest chapter, Reborn, reaches the lowest point of this long and glorious saga.

We start with originality by plagiarizing in toto the beginning of the first movie, only that behind the wheel of the car that crosses the Creeper’s van is a couple of insufferable old men.

The van tries to throw them out, they escape and go back to check out the monster’s lair, precisely as we have seen before, with significantly worse direction and editing.

We are not shown the death of these obnoxious characters, as we might have liked, since we are actually watching a movie along with the real protagonists of this story.

You got it right: Jeepers Creepers Reborn proceeds as if the previous three chapters did not exist.

Unfortunately for viewers of this garbage, the movie saga inspires many kids to organize a cosplay event at the locations where the previous movies were filmed.

Yet the Creeper will turn out to exist for real and will take out almost all the characters in a pointless series of tragicomic slasher scenes to the backdrop of Harry Warren‘s iconic song, also badly sung in a simply awful cover.

Perhaps I like to think positively and am always stupidly optimistic, but I usually try to find at least one positive aspect to save in any movie.

In this case, saying that this is a lousy sequel would be highly reductive. This movie is depressing, maiming the hearts of fans of this saga as not even the Creeper could have done.

The direction is borderline amateurish, the actors are insufferable, and the monster looks like a kid dressed for Halloween.

The only good thing, if nothing else, is that it ends.

If this is the new course of the Creeper reborn, perhaps it had better stay buried forever.

Inside Man – An Astonishing Heist To Do Justice