Inside Man – An Astonishing Heist To Do Justice 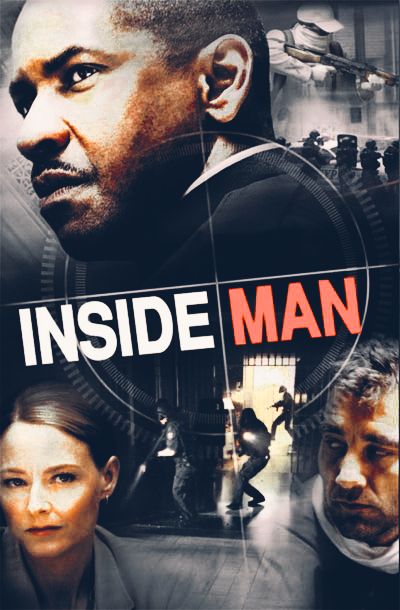 Looking back at my site, I realized that I had never mentioned anything by Spike Lee so far, so I want to start with Inside Man, a terrific heist movie from 2006.

Since the 1980s, his long filmography has focused on the urban relationship between complex interracial people of which America is made.

So it was a surprise for the more adventurous genre lovers when the director came out in theaters with this action thriller, raking in nearly $200 million worldwide.

The story begins with a quiet, ordinary day in a prominent New York City bank when suddenly a handful of masked robbers storm in with guns drawn.

After seizing customers’ cell phones and employees, they force everyone to wear the same outfit with a hood and a white bandage over their faces, becoming identical to one another.

Therefore, when police rush to the place, they dare not raid inside because they cannot distinguish the criminals from the hostages.

In charge of the case is a detective under investigation for the disappearance of a large sum of money, so he is in a high state of career strain.

The strange thing is that the robbers do not seem to be in any hurry, making the detective suspicious, who believes that they actually plan to do more than just a robbery.

Indeed, at the same time, the bank president makes arrangements with a woman who deals with highly delicate political and judicial situations.

However, the president does not care about the bank’s money or the hostages’ lives.

What concerns him is a single safe deposit box containing the dirty secrets of a past that he tries hard to bury.

The heist becomes a three-way game between the woman mediator, the detective, and the brave robber leader.

Intelligence and entertainment hand in hand

Whatever kind of story Spike Lee wants to tell, he always finds the appropriate pace and style to capture his audience’s attention.

No matter the subject he chooses to cover, his talent is suited to telling the story of the last day before prison, as in the 25th Hour or the biography of Malcolm X beautifully.

The latter then shares with 2006’s Inside Man an extraordinary leading man like Denzel Washington, one of the best actors ever who plays an incorruptible detective like Bullitt, a famous movie with Steve McQueen.

Indeed, the central theme of this story is the search for truth at any cost, as even the robbers from the inside do with a dirty Nazi criminal, becoming criminals themselves to expose him.

In another director’s hands, hardly all these themes could coexist in such an engaging way while also offering a fantastic entertainment thriller.

But Spike Lee‘s superior technique perfectly combines an adventurous pace with an almost documentary-like spirit of inquiry, setting it in an urban context of believable and interesting people.

Whether it’s the racist cop talking to the detective or the beautiful Albanian girl translating for the police, each character has his or her moment to tell us his or her story and way of thinking and being.

As mentioned, the movie moves like a show with three different performers: the detective, the intelligent businesswoman, and the robbers with their mysterious plan.

Each of them moves their pieces in this no-holds-barred chess game where cheating or plotting in the shadows will let only the most skilled and intelligent win.

We, therefore, admire the making of one of the best heist movies ever, where moreover, the director does not forget his origins and the constant battle against racism he has always waged.

The many faces of justice that don’t forget

In addition to Denzel Washington, who delivers his usual performance of charisma with a strong and funny attitude, the rest of the cast also proves to be top-notch.

Above them all, we can put Clive Owen, the main nemesis of the lead cop who heads this mysterious masked gang.

Among the best moments of the movie are undoubtedly his conversations during the negotiations, where with irony and determination, he questions that with him it is better not to joke.

Even more exciting is his brief dialogue with Jodie Foster in a Spike Lee movie for the first time.

Her character does not have as many scenes as the male performers, but the actress gives life to an ice-cold woman who faces New York’s toughest men head-on without hesitation.

But even though she works for someone doesn’t mean she can’t pick her battles, too, as she makes clear to the great Christopher Plummer, who hires her to cover the horrendous stains on his conscience.

This wealthy Nazi is a character close in his cruel love of money to his role in All the Money in the World, Ridley Scott‘s fantastic movie where the actor played the famously greedy billionaire Jean Paul Getty.

Finally, let us not fail to mention the supporting characters, with Willem Dafoe and Chiwetel Ejiofor as the detective’s colleagues whose great performances superbly close the circle on a perfect cast.

This great chorus of stars sings the song of equality and social justice by Spike Lee, whose movies you may or may not like, like the 2006 Inside Man, but you can certainly never say he is a trivial director.

So let us experience this exciting suspense exercise with so much to say about the soul of America, capitalism, and racism still alive more than ever.

Whatever Works – Looking For Happiness In New York