Paterson – The Ordinary Life Of A Young Poet 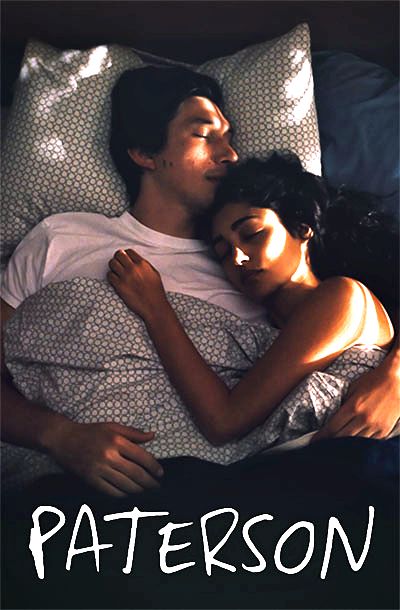 Today I want to talk about a particular 2016 movie by Jim Jarmusch, Paterson.

If you follow my site, I usually like to talk about very different stories, but I don’t know what cinematic genre to put this story in.

Just like the title, we follow a young bus driver named Paterson who lives and works in the New Jersey town of the same name.

His partner is a lovely woman with many passions, such as cooking, making her clothes, and desiring to learn to play the guitar.

On the other hand, he is more habitual and follows the same routine every day, riding the bus through his usual tour of the city, returning home to his sweetheart, and going out for drinks at the nearby pub.

His few friends also follow their own routines, such as the coworker who is always complaining, the bartender who is fond of chess, or even two former lovers who are constantly arguing about their broken romance.

It might almost seem like a tedious and meaningless life, yet not everything is always as it looks, and behind his almost apathetic appearance, the boy hides the poet’s soul.

Indeed, his passion is writing in a notebook that he carries with him everywhere, composing little tapestries of words about the little things that are part of his day.

Whether it’s about a simple matchbox or the sound of the windshield wipers on his bus, there’s nothing he doesn’t reflect on in his own simple way by then clicking his pen and filling one page after another.

Even when this endless flood of words is lost forever, he does not give up, and with the help of another poet he met by chance, he begins a new literary adventure in a completely new notebook.

The extraordinary life of ordinary people

We often look for fast-paced and adventurous movies, but sometimes we need something that presses on the brakes and lets us enjoy the landscape, like 2016’s Paterson.

Jim Jarmusch is a director I have featured several times in articles on my site, recommending some of his gems, such as Only Lovers Left Alive, an unusual vampire love story.

I love how he takes his time to tell the stories of his quirky and lovable characters, who are closer to our human weaknesses and uncertainties than the superheroes of big American blockbusters.

Yet he keeps to his style and narrative pace even when he narrates about very diverse adventures involving a hired killer, as in two other movies I had recommended, Ghost Dog and The Limits of Control.

Here the brilliant and unconventional director turns poetry into adventure, with no need for tricks or excesses of cinematic virtuosity.

On the contrary, Paterson glorifies the normalcy of ordinary people with the small desires and hopes they cultivate in their little homes after each long day at work.

We are millions of people who still like to read and create something of our own, such as I humbly try to do with this site recommending the movies I like the most every day.

Maybe we will never win an award or become millionaires, and the great masses will never know our name; this is undeniably true.

Nevertheless, we want to leave our small mark in this world, reading and learning not to get a good score in a school exam.

No, we do it because we like to feed the imagination and our souls with something we may not even be able to explain.

Life is the longest poem

More than anything else, what I love most about 2016’s Paterson is finally granting the space he deserves to Adam Driver, the unquestionable protagonist of this movie.

As his character says, he blazes a trail among the millions of molecules in this world, continuously in the same way and following the same path, which is different every day.

In addition to his beloved woman (an adorable Golshifteh Farahani), his notebook is his most faithful friend every day, where he jots down with meticulous pen strokes all those thoughts that crowd his mind without ever leaving his mouth.

So a match can become a declaration of love, a chance meeting can change your life, all ending up on those pages he never let anyone read.

In this movie, we stay with him for an entire week, discovering the talents and history of the town of Paterson through the small conversations that happen in the daily life of each character.

Poets, artists, or revolutionary anarchists all seem to share their roles in this script that Jim Jarmusch writes and directs with the heart and passion of a restless teenager.

For example, the anecdotes and poems of William Carlos Williams, a distinguished fellow citizen of the protagonist whose books have a place of honor in his collection, recur frequently.

He also drew inspiration for his art from the little things that perhaps others did not give importance to, not caring to write in rhyme but always with a musical rhythm between lines.

Please give a chance to the beautiful tranquility and peace of this movie, which is a relaxing warm bath for every movie lover.

The real lesson, we can conclude, is to experience our lives as an endless and exciting poem.

Whatever Works – Looking For Happiness In New York