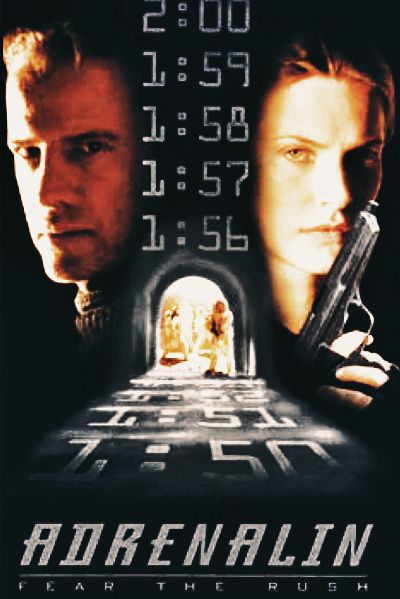 Today we are talking about a little movie from 1996, Adrenalin, an intriguing action horror that not only many have forgotten but perhaps never even got to know.

It takes place in the future (at the time) 2007, which is already in the past for us, describing a dystopian reality where Europe sinks into the abyss of anarchy and fear starting in Russia.

Given the present moment, it might seem cheesy, but I doubt that director and screenwriter Albert Pyun could have predicted Vladimir Putin‘s military moves in 1996.

In this future, a deadly virus comes after food and water shortages to bring what remains of the population to its knees.

The story begins precisely in a Russian hospital, where one of the sick armed with a knife is wreaking havoc on doctors and other patients.

Jumping ahead to 2007, many survivors are on the run seeking the promised land in America, whose government confines the immigrants to a reception center.

The center was supposed to be a temporary measure, but given the impossibility of accommodating all the escapees, it becomes a veritable city of pain and despair.

In one of its uninhabited neighborhoods, a young girl who is a policewoman goes to check on a mysterious call for help.

Entering the building, she finds several horribly mutilated corpses on the upper floor when a monstrous-looking man kills her colleague.

Miraculously escaping the monster, the girl immediately calls for backup at that point.

Three other colleagues arrive to help her, chasing the killer down the street into another abandoned building.

This place was formerly a prison, where the monster locks the armored doors, trapping them inside and beginning to kill them one by one.

The vast forgotten stratum of B-Movies

Albert Pyun has a long filmography on his shoulders in which quantity, unfortunately, only sometimes goes hand in hand with quality.

Indeed this veteran of B-Movies is capable of creating little gems like this 1996 Adrenalin we’re talking about today and the thrilling Mean Guns, a movie I recommended not so long ago, again starring Christopher Lambert.

When he fails, however, he does so resoundingly, such as with the 1990s Captain America, an unsuccessful comic movie experiment before Chris Evans began playing the character.

In this case, however, the director creates a perfect atmosphere from the very first minutes with a compelling introduction that combines clips from fake news/documentaries with a tense massacre scene inside a hospital.

The monster looks simple and effective, always moving quickly or in the shadows where we can only see its ferocious unnatural blood-covered teeth.

Equally believable is the location of destroyed buildings in this immigrant/sick confinement area, where violence is the only law. At the same time, the few ill-equipped police officers try to enforce some kind of order.

The dark, rotting interiors of the prison are the final set where most of this story will unfold, with a series of fast and brutal shootings and assaults by this maniac with his massive knife with spikes from the handle.

Finally, let us mention Tony Riparetti’s good music that accompanies us by giving the right pace to the action scenes and a dense tension to the sequences of waiting in the dark, always remaining balanced between heroic adventure and horror trap.

As I often say, I love these forgotten B-movies even though I am aware they are unlikely to have a chance to compete for an Oscar.

However, for those who love great little entertainment cinema, what does an Oscar matter?

The hard life of the dystopian cops

The most important protagonist is definitely the policewoman Natasha Henstridge, who we see from the beginning buying illegal papers for her son.

Being willing to do anything to get out of the quarantine zone, she works in the riskiest areas of the city where criminals spend half the time killing each other and the other half attacking cops.

However, this character does not start out as the invulnerable and fearless heroine. Instead, we often see her hesitate, facing the seeming invulnerability of this monster that seems to come out of nowhere.

The beautiful and talented Canadian model/actress plays one of the best roles of her career, along with the deadly sexy alien we talked about in the 1995 movie Species.

Christopher Lambert arrives a little later at the creature’s first assault, along with the reinforcements who are supposed to help the woman, yet end up as fodder for the monstrous enemy together.

We do not know much about him, and he is not a hero who never makes a mistake. Indeed, he foolishly insists on chasing the killer into the prison without waiting for reinforcements.

However, when the situation gets tough, he is definitely the policeman who best holds his nerve without panicking, spurring his colleagues to react as well.

I am sorry for the character of scientist Andrew Divoff since I would have appreciated having more movie time to help us better understand where this monstrous creature came from.

However, in his few scenes, the actor does his best with great charisma, convincingly playing the role of the action leader acting with few words.

So let us also use a few words and get down to action by watching together this 1996 movie that, as per the title, will surely get your adrenalin pumping.

Byzantium – The lonely world and...