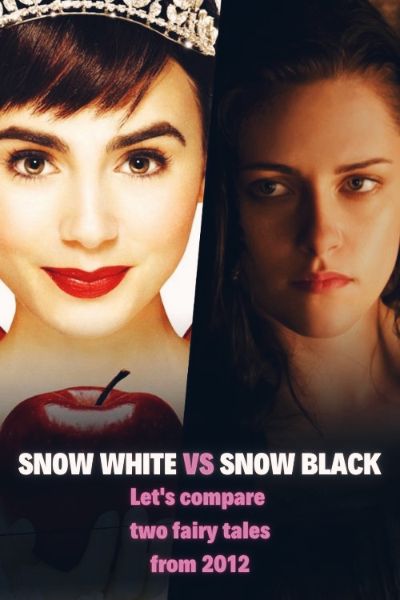 Whether we want it or not, the allure of the fairy tale black soul we have known since childhood accompanies us all our lives, such as the famous Snow White vs her hateful stepmother/ evil queen.

These stories mainly serve to put children to sleep when it gets late, yet they often combine the sweet security of being with parents with the sad and cruel truth that awaits us as adults.

It may be the big bad wolf waiting for you in the woods or the scary witch from Hänsel and Gretel, but the moral is that out there, you always have to watch out for monsters who want to devour you.

Today I want to talk about two movies that tell the same fairy tale with the same characters but do so extremely different in both the tone of the narrative and the visual style of their directors.

There are probably dozens of cinematic versions of Snow White. However, these two movies I saw at close range in 2012 have mainly stuck in my memory for one reason or another.

So pull the blanket up to your nose, and I’ll think about lowering the light by starting to narrate in the most traditional way: once upon a time, there was a princess….

As mentioned right from the title, comparing these two movies, we are dealing with a fundamental clash between Snow White vs Snow Black.

Indeed, Mirror Mirror is closer to the fairy-tale style similar to Disney’s children’s classics, while Snow White and the Huntsman has a soul with a darker and more evil scenic cut.

Therefore, the former is a fast-paced fantasy comedy built around a few characters engaged in many funny gags.

The second, on the other hand, has many more dramatic and intense moments, including some scenes with monsters that almost reach the horror genre.

If you are familiar with the films I recommend, you might believe that my heart leans towards the dark side of this comparison.

This preference is not always immutable because I often prefer to watch something lighter and less stressful with undemanding entertainment.

For example, I find that the trusty seven dwarfs are better differentiated in the Mirror Mirror comedy genre, where they have more room to be recognizable from each other.

In contrast, I preferred the solid male figure in Snow White and the Huntsman, Chris Hemsworth, who is better suited to the romance vs the story’s black background.

This is not to say that Prince Charming Armie Hammer is less masculine. For example, you might see him play the violent, silent Russian agent in the exciting espionage movie The Man from U.N.C.L.E.

The romance fits better in the fantasy comedy Snow White, which has more time and scenes to unwind, than in the horror drama, which has a more action-adventure pace with much less room to talk.

Whatever your cinematic tastes, I recommend seeing both to get a fuller experience of the light and dark of this fairy tale.

Who is the most beautiful in the kingdom?

Of course, the lead actresses in these movies are both young and beautiful, with soft snow-white skin as befitting their character’s name.

I must admit that of the two, I undoubtedly prefer Kristen Stewart, who also has a more complete career in a range of extraordinary performances.

The role of her that I like least is precisely the one in the most successful movie, Twilight, the progenitor of a horror/romance saga that has had four sequels.

In this case, Snow White is a girl tormented by uncertainty who then convincingly finds courage and determination, becoming a heroine similar to the old black and white dramas.

Moreover, her approach to the other characters is always charming and seductive, without ever going so far as to be overtly sexy or naughty.

The actress performs well as the pivot around which all the other stories in this plot revolve. However, the ending’s high pace action/warrior turn seemed a bit forcibly exaggerated.

In the other movie, Lily Collins is more naive and smiling while being just as beautiful and innocent as her rival.

Her gait is at times awkward and indecisive, probably a director’s choice to increase the comedy of the absurd situations she finds herself in.

However, she too demonstrates good agility in some amusing fight scenes after a brief field training of her little seven-dwarf friends.

Since this is a movie designed for younger children, not much emphasis is placed on her sexuality, so her body is often buried under heavy, giant costumes in colors as bright as spring.

In short, Snow Black essentially wins this round, but I would be curious to see how Snow White actress would fare if the roles were reversed.

Let us now talk about the antagonist of the unfortunate princess, played by two magnificent Hollywood stars.

I really doubt who to prefer, although I have generally always considered Charlize Theron a more complete actress.

Although she has the role of a mad and evil queen, she still manages to be as desirable as ever, and that cruel sparkle in her eyes further accentuates her sexy look.

Since, as I said, this is a Snow White that tends very much toward Black horror, the witchcraft side of the queen has more impressive and evocative scenes of magic.

Again, the final battle is perhaps over-the-top action. Still, the confrontation between the princess and the witch compellingly concludes with almost sadness toward the queen.

In the other movies, Julia Roberts is obviously more demure and suitable for a child audience. However, she does not miss an opportunity to throw in sexual jokes and innuendo, especially when the sexy young prince enters the scene.

The actress fits the game by acting with great self-mockery, less violent cruelty, and a believable desire for power and omnipotence that makes her even funnier.

Although she uses less magic than her rival, some scenes are equally impressive, such as when she fights at a distance with Snow White and the seven dwarfs by maneuvering puppets with black magic.

Or let’s also talk about the scenes where she crosses the mirror, where she plays the double role of the queen and her mirror image that does not fail to tease her about how she is trapping herself.

In conclusion, I feel like decreeing a tie between these two magnificent actresses, whose roles I would like to add up for an impossible character that is as comic as it is relentlessly violent.

The final comparison can only be between the directors with two very different styles, starting from the same premise.

Tarsem Singh is an experienced (but not so experienced, after all) director I recently recommended his excellent horror/thriller starring Jennifer Lopez, The Cell.

Given his visual talent and the perfect geometry in the shots of the magnificent sets, I would have been curious to see him direct a Snow White that was much more Snow Black.

However, even in the play, the director demonstrates good cinematic craft, managing the fast pace without rushing madly and creating the fairy tale atmosphere we all expect.

However, Rupert Sanders‘ experiment is more adult and exciting, achieving a good compromise between myth stereotypes and his desire to make cinema different.

The latter is still beginning and will later continue his career with the film adaptation of the famous manga Ghost in the Shell, another experiment that will only partially succeed.

The director is still deciding what he wants to do with his talent, and we must all admit that he certainly has talent.

There are rumors of him remaking The Crow, the famous rock horror film that marked the tragic end of the unfortunate Brandon Lee.

If true, I hope it will be a movie with its own personality and not become yet another pointless remake that we will rush to forget.

Returning to today’s challenge, however, I will undoubtedly decree his movie, Snow White and the Huntsman, the winner, is more exciting and with an intriguing black soul.

However, for an evening of joy, remember its rival, Mirror Mirror, which is more classic and predictable, yet it is still good and fun entertainment for everyone.

Director Vs Producer – The Never-Ending...

The Imaginarium Of Doctor Parnassus –...