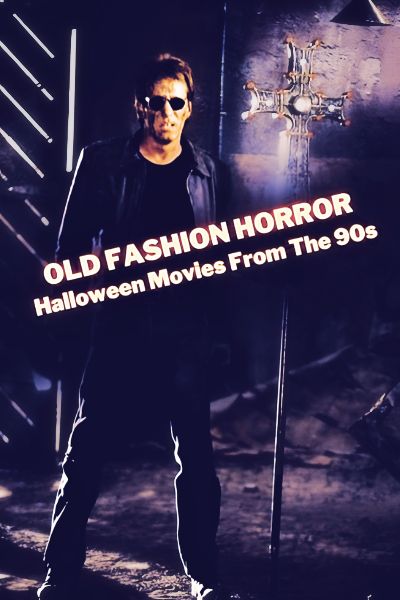 Like every year, Halloween is upon us again, and for us movie lovers, that means it’s time for some good horror movies, so why not pull out some from the good old 90s?

I don’t want to be a boomer saying the movies of yesteryear were better than the movies of today, also because last year I recommended some horror movies that were all pretty recent.

But what I mainly loved about the 90s was the lightness and irony that, with time, cinema seems to have lost, not only in the horror genre but also in action or sci-fi movies seem to have lost.

Today it seems that everything has to be damn serious in pursuing a boring realism that, frankly, I don’t think anyone cares about.

That is why I prefer a little movie like Event Horizon, where the protagonists discover a portal to hell in a spaceship adrift in space; rather than the unnecessarily snooty and philosophical science fiction of Interstellar, although I admire the skill and technique of the director Christopher Nolan.

Of course, Halloween is just an excuse to talk about the movies we are most passionate about (maybe from our 90s memories), as is the case whenever I find a topic to talk about around which to recommend a handful of movies have the most struck my imagination.

For example, we had already talked about car horror thriller without needing it to be Halloween or still divided into an episodic movie as if they were a small episode of a series being similar but different from each other.

So whether you like suspense and ghosts or violent gore shows, as every time, here we are on the starting line with today’s recommendations.

We begin with one of the greatest horror masters (and beyond), namely the one and inimitable John Carpenter.

Toward the end of the 90s, the director movies was not doing very well, far from the success of the famous horror Halloween and fresh from the scorching flop of Escape from L.A., an entertaining sequel to Escape from New York.

Disappointed by his fans who fiercely criticized him, he returned to his roots with this fantastic horror film that revisited the vampire myth with a Western twist.

In this story, we follow a group of hunters who, commissioned by the Catholic church, wander into New Mexico to destroy what remains of a pack of these blood-sucking beings.

After they destroy the lodge, their master retaliates by attacking the hunters at night and killing nearly all of them.

The only two survivors then set out on his trail, along with one of the victims with a telepathic link to track him down.

They are joined by a young priest who, being a vampire myth expert, believes the master is in search of an ancient relic to officiate a ritual that would enable him to defeat daylight and become immortal.

The basic idea of Vampires alone is worth the ticket price: to combine bloody B-movie vampires with gunslingers who look like something out of a Sergio Leone western.

In addition, we get to see James Woods‘ sympathetic leather face finally back in the spotlight after David Cronenberg‘s famous Videodrome.

Although he is an actor with exceptional charisma, unfortunately, over the years, too many times, he has been relegated to the role of only a supporting or character actor.

So let us enjoy his resounding performance under the guidance of one of the most excellent artisans of popular cinema of all time.

Let’s return to a director I have always immensely enjoyed, Peter Hyams, whose excellent Outland I recommended not long ago in the article about some of the best movies with Sean Connery.

We still remain in the realm of sci-fi movies, but since we are in the days of Halloween, it is delightfully peppered with handfuls of 90s horror style.

It all begins in faraway Amazonia, with a scientist engaged in collecting some strange plants that, to his misfortune, will have a devastating effect.

After his death, his research and the collected samples were shipped to his colleagues working at the Chicago museum.

However, the crate also contains something far more dangerous, born in the forest and needing to feed on the genetic makeup of every animal it encounters.

Immediately strange deaths begin to occur, and some witnesses tell of a monstrous creature roaming the museum’s vast corridors.

But a significant exhibition is about to begin any day now. Hence, the museum management denies any problem so as not to discourage the public from attending the event.

A police lieutenant and a beautiful scientist will be the only ones to try to prevent this event from becoming a buffet where this monster can binge on human brains.

To be honest, this movie does not have who knows what great originality or unexpected twists we have yet to see in other similar horror films.

But the solid experience of Peter Hyams and the charisma of two stars like Penelope Ann Miller and Tom Sizemore turn what could have been a simple B-Movie into a claustrophobic and exciting monster hunt.

So it is among the best 90s movie to fill your Halloween evening with, especially for all those who find spending time in a museum boring!

I’ve said several times that I’m not exactly thrilled with the dozens of remakes and reboots of old-timey movies, but there are reasonable exceptions.

In this case, for your Halloween, let’s talk about the 90s remake of Invasion of the Body Snatchers, an unforgettable 1950s horror movie despite the silly happy ending imposed by the production.

The first remake was an excellent 1978 film by Philip Kaufman starring the great Donald Sutherland.

In 1993 Warner Bros decided to make another remake, entrusting it to Abel Ferrara. He was fresh off the heels of the masterpiece The Bad Lieutenant and probably agreed for mere economic reasons.

Although blatantly a horror film for hire, the story retains the personal and sensual edge of a director who knows no half-measures.

The story is about a family that goes to live near a military base, where the father is supposed to continue his experiments on the strange local flora.

But the plants are more dangerous than he thought, sneaking into homes, absorbing people’s essence, and then creating an identical copy in body, mind, and memories.

These copies are devoid of all emotion and act as a collective mind, slowly replacing every inhabitant of the city, but something goes wrong when they hit on the scientist’s family.

At that point, the little family must flee as the silent invasion expands beyond the confines of the small town, becoming a planet-wide threat.

Outstanding is Terry Kinney as the scientist/father, probably in the most crucial role of his career, along with beauties Gabrielle Anwar and Meg Tilly, who respectively play the rebellious young daughter and the creepy mom replaced by the invaders.

In short, a stylish remake that modernizes without detracting from an all-time classic.

Directing this time is Robert Zemeckis, a cult auteur for at least two generations with the hilarious Back to the Future saga and Oscar-winning hits such as Forrest Gump.

This time he tells us about a deadly struggle between two women, so-called friends, who compete by constantly trying to be more beautiful and successful than their rival.

After one seduces and marries the talented surgeon engaged to the other, the latter ends up in an asylum, losing her sanity and fitness and becoming an obese madwoman who plots revenge.

Many years later, the friends/enemies meet again, but for one of them, time does not seem to have passed, and she is more beautiful and younger than ever.

The other flees shamefully, begging her doctors to subject her to more unnecessary surgeries.

But at this point, the woman finds a strange secret sect that offers her an expensive elixir that will bring her back and make her stay eternally in her youth.

Her friend had also taken the same magical concoction, so the two women could resume fighting on equal terms.

However, when they kill each other, they discover that the elixir works even beyond death by continuing to keep them alive despite their bodies falling apart.

Death Becomes Her is an outstanding parody about the obsession with beauty at any cost, with two beautiful actresses, Meryl Streep and Goldie Hawn, becoming horror zombies worthy of the front row at a Halloween parade.

Robert Zemeckis signs off on a black comedy that destroys the silly vanity of Hollywood stars for a pleasant evening of monstrously grotesque overtones.

In this case, the director bravely plays himself, without shame or the slightest modesty, describing a character so obsessed that he has psychic disorders and constant nightmares.

Therefore he starts treatment with a psychiatrist, hoping to get out of the vortex of madness that is also ruining his work, distracting him on the miserable film sets of his movies.

At the same time, dead bodies are popping up everywhere all over Rome, horribly hacked to pieces as in the director’s visions.

The latter begins to fear that he is the murderer, his therapy sessions get stranger and stranger, and even his psychiatrist seems to have something terrible to hide.

I was never too interested in Lucio Fulci in my youth, despite having seen many of his movies numerous times, but without knowing that he was the director.

The cultural elite and big productions always kept him away, gaining a little popularity only in the late 90s, when rising star Quentin Tarantino declared his love for his movies in his first interviews.

During the presentation of Reservoir Dogs, the director flaunted his admiration for the brilliant Italian colleague, calling him a genre terrorist who was able, like a few, to mix comedy, horror, thriller, and science fiction.

We can only remember him as an artist who, despite his immense imagination and creativity, always had to make do with paltry productions and unlikely casts of actors and actresses.

But his immense cinematic legacy lives on more than ever, teaching everyone that even blood-dripping splatter can be smart and stylish.

I hope you can all have a good time on Halloween night, perhaps with the horror films I have recommended today, and don’t hesitate to write below what you think about them.

Significant Other – What Happened In...