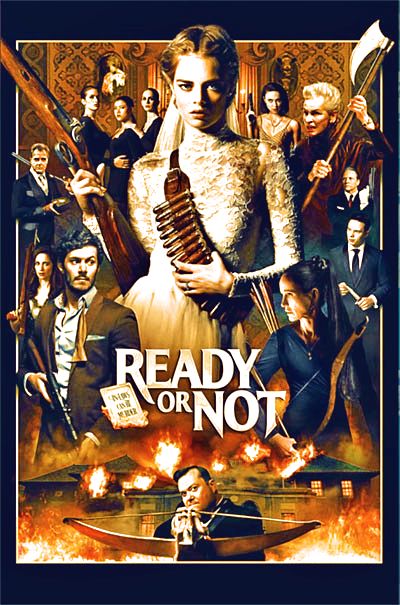 How much trouble relatives cause us, even the ones we have just acquired, as for the beautiful protagonist of this 2019 movie, Ready or Not.

Indeed this story begins with a girl in her wedding dress, waiting to join the Le Domas family.

The whole family wants to figure out who is the beauty who has stolen the heart of their eldest son, who had left home years earlier only to reappear on the eve of the upcoming wedding.

After the ceremony and reception, although the couple loves each other very much, they cannot fulfill the desired passion.

Downstairs her new relatives are waiting for her, who are all around a table and have something special coming up for her first night as a bride.

Since their fortune lies in the board games that bear their names, it is a tradition that each newcomer to the dynasty randomly draws a game from an ancient deck of cards.

At that point, everyone must play until dawn, concluding this extravagant welcome to the house.

The girl pulls out the hide-and-seek game, watching in amazement as horror descends on her new husband’s face.

He still remembers when he was a child, and his uncle’s new wife had pulled out the same game, which the family does not play as all the children in the world do.

This hide-and-seek is a deadly challenge, where everyone arms themselves with guns and crossbows to hunt down the girl inside the huge house full of hidden passages and secret rooms.

Initially amused, the bride quickly realizes that the game is no joke when one of the maids dies before her eyes.

But despite having everything against her, she will show her new relatives that she is tough to die.

A spectacular and bloody black comedy

The movies I most appreciate have a great irony with which they accompany us, viewers, to constantly remind us that we are at the cinema to enjoy a show.

Ready or Not crosses all horror stereotypes with several action scenes and splatter moments, always keeping the entertainment high with a 2019 movie pace and hilarious black-tinged comedy.

We can say what we want about the story and characters, but I assure you that there is not a single second of boredom in its hour and a half of running time.

Director duo Matt Bettinelli-Olpin and Tyler Gillett create a little gem that is a fragrant breeze of fresh air to lift the spirit of popular cinema.

Of course, the underlying moral is that the rich are willing to do anything to maintain their social status and believe they have the right to do whatever they want in the name of their power.

The relentless hunt toward this poor girl fits into a bizarre story of the ghost being the fortune and the damnation of this dynasty.

This specter has a passion for gaming and dominates with the terror of destroying this wealthy, spoiled elite of men, women, and even children.

Indeed it is simply fantastic to compare the ancient elegance of the house and the garish clothes of the guests against how horrible, stupid and selfish people they really are.

Likewise, we witness the transformation of this bride through the unraveling of her elegant dress, losing a piece in each scene and gradually becoming from snow-white to completely blood-red in the exhilarating and explosive climax.

Therefore, it is a perfect movie for those who adore shows with bloodshed, like Evil Dead, with the same perverse and adorable sense of crazy, out-of-control fun.

Besides the excellent direction of Matt Bettinelli-Olpin and Tyler Gillett, the rising star of young Samara Weaving stands out in this movie.

The beautiful granddaughter of the famous Hugo Weaving (for those who remember him, the unstoppable Agent Smith from The Matrix) has already won my heart with her stunning beauty and by choosing violent roles that are always tempered by brilliant irony.

In this case, it is amusing to watch how she plays this ordinary girl, even a bit ignorant and vulgar, against a family as elegant and arrogant as a royal dynasty.

Initially seeming like the naive victim who should have no hope of succeeding, she becomes the absolute mistress of this unforgettable blood-red wedding.

Equally interesting is her new husband with the clean-cut, harmless face of Mark O’Brien, perpetually torn between being loyal to the family and fighting to defend his woman.

To some of you, he may seem like a character who makes strange choices with undefined behavior, yet he gives humanity between being brave and cowardly.

Finally, of all the other members of the Le Domas lineage, I want to mention Andie MacDowell, the mother of the groom with cunning as sharp as a scalpel.

Usually, we expect to see the actress in comedies or romantic stories, but here she is a magnificent femme fatale with a heart as black as darkness.

This fight of the rich man against the poor man reminds me of John Woo‘s funny Hard Target with Jean-Claude Van Damme, where the actor fought a group of bored rich men who hunted down bums for fun.

So I can conclude and recommend 2019’s Ready or Not to those looking for a bit of horror, action, and entertainment in a movie that cheerfully devastates the sacred institution of marriage.

We Need To Talk About Kevin – A Son Against Mother Story

Sicario and Day Of The Soldado...