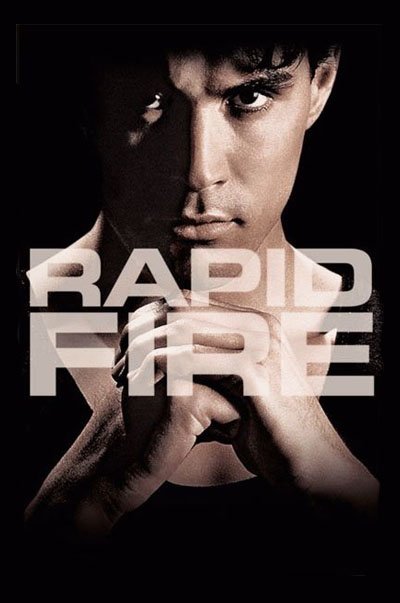 Among the few movies from Brandon Lee‘s career, which tragically ended with his death on The Crow set, I would like to mention this action crime from 1992, Rapid Fire.

In this story, the actor plays a young Chinese-born man who expatriates to America at a very young age and now studies art at Los Angeles University.

His life seems to proceed quietly, although memories of the Tiananmen massacre, which he witnessed as a child, haunt him in his nightmares.

Everything changes when he goes to a party with a beautiful girl one evening, and during a lonely moment, he witnesses a brutal murder.

Barely escaping the confusion that immediately follows, the police take him into custody, bringing him to Chicago.

Indeed, the man he saw shot in cold blood is a powerful mob boss looking to intimidate his Chinese drug suppliers.

The victim was this organization’s largest heroin distributor, and now they are preparing to retaliate for this unexpected attack.

Amid these two warring sides, the cops supposed to protect the student betray him before he testifies in court.

However, these corrupt officers and criminals do not know the boy’s father was a martial arts instructor so skilled he trained Chinese officers and sometimes even some CIA agents.

Taking advantage of his late parent’s teachings, he repeatedly escapes the criminals who want to kill him until he meets one of the few honest policemen in the city.

Along with a small group of colleagues, they are the only ones fighting corruption in the department.

So they decide to throw bait to frame the cops and drug dealers at once, but of course, everything will not go as they had planned.

We will never know where Brandon Lee‘s career could have gone since just the movie that should make him an international star marked his tragic death instead.

In those few roles he played, he seemed an excellent action star with great physical prowess in fight scenes.

He may not be on the peerless Bruce Lee‘s level as a martial artist (after all, who is?), yet he looked like a more depth actor than his father, which could also lead him to more dramatic and challenging roles in the future.

Wanting to make a daring comparison, his acting style, so spontaneous and natural, reminds me of Marilyn Monroe, with whom he shares a tragic fate, remaining forever beautiful and young in our memories.

Like the famous actress, Brandon Lee acted as if he never had to learn anything, fulfilling the screen with the charisma and charm of his naughty boy face.

Considering his physical skill and the heavy legacy of being Bruce Lee‘s son, producers initially offered him only action roles where he must beat up his enemies as spectacularly as possible.

However, as mentioned earlier, his intense and moving performance in the cult horror/rock The Crow could be the turning point opening up an endless world of possibilities for him.

Indeed, rumor has it that the Wachowski sisters had chosen him to be Neo in The Matrix, a role that later went, as you all know to the equally talented Keanu Reeves.

His story resembles his father’s, for whom Enter the Dragon, his last movie, actually would be the gateway to international cinema.

We can just imagine father and son sitting next to each other up there in the actor’s Olympus while we down here continue to admire those stories which made them legendary.

To avoid transforming this article only into a Brandon Lee‘s remembrance, back to today’s movie, Rapid Fire from the far 1992.

Needless to say, all the fight scenes are excellent, I believe even due to the fantastic stunt performers’ work, especially the legendary Al Leong.

I remember the actor in movies like Big Trouble in Little China or Die Hard, always in the villain roles with impassive faces and extraordinary physical agility.

He gets to be Brandon Lee‘s enemy in the most brutal fight, where they roll together, unleashing flying kicks and punches amid a burning warehouse.

However, the real boss for much of this story is Nick Mancuso, a hilarious and cruel mob boss whose exaggerated acting is always comically menacing.

Equally likable is the tough cop willing to frame him at all costs, the veteran Powers Boothe, who takes custody of the young Chinese boy without hesitating to put him in danger to set off the trap against the mobsters.

Instead, Tzi Ma is the Chinese rival drug lord, more physically engaged in various scenes, such as the spectacular introduction where he engages in a Thai stick fight.

Actually he is the main character in the final fight, yet I chose to mention Al Leong because he features in a memorable sequence indeed.

Finally, let’s add Kate Hodge, the sexy cop who perhaps could have more space in the story but ultimately is just the protagonist’s little romance moment.

It is a pity Rapid Fire grossed so little in 1992, less than it deserved, although we will never forget it as one of the movies where we can admire the everlasting Brandon Lee.