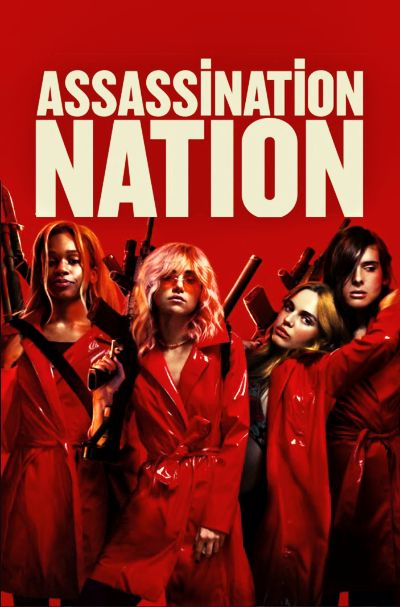 Sometimes a movie is so topical and violent that a large part of the audience rejects it, mistakenly judging it as dull and stupid, as happened to Assassination Nation in 2018.

In reality, this story is a clever pulp metaphor for our society and our addiction to the virtual social circus whose stupidity can happen to come out fearfully in the real world.

We see the life of a group of young and beautiful girls in the small town of Salem, a seemingly quiet and sunny corner that seems to be the best face of America.

These schoolgirls spend their days precisely as you might imagine, killing boredom at school and teasing the boys who relentlessly woo them.

Obviously they are trendy for their beauty, seeming like great friends, yet with natural quarrels and lies told behind their backs between them.

For example, one has an affair with a married adult, enjoying chatting and sending each other explicitly sexual photos.

Another, on the other hand, has a complicated relationship with her mother, who is separating from her wealthy father, although in everyone’s eyes, they still seem to be a happy family.

We talk about the little sins in every corner of every city in the world, nothing serious in this respect.

But one day, a mysterious hacker starts bombarding social media, revealing personal photos and messages that can ruin families and reputations.

At that point, everything escalates quickly, especially when the focus is on these girls whom everyone wants to lynch publicly.

The friends will then have to put aside their silly little personal grudges and put up a united front to survive the night.

As the town becomes a battleground, the rules of society fade, and the blood begins to flow.

How we never wish to see our children

With Assassination Nation, Sam Levinson directs a movie that failed to make almost anyone happy in 2018.

As I mentioned, reading many of the audience’s opinions, they found it boring, especially in the first part, which is quite descriptive of the environment and characters.

Similarly, critics did not like the second half, with the violence and madness climax, perhaps demanding more realism as it was a documentary movie.

Instead, it has a teenager comedy/drama style after turning into an urban hell similar to the action/thriller saga of The Purge.

In addition, I believe that the protagonists are the 18-year-old girls that many fathers and mothers don’t want to see or think they can talk or behave this way.

If at first, these sweet dolls are the classic object of sexual fantasies, they then become post-feminist warriors similar to Uma Thurman in Kill Bill.

Let’s face it; audiences love stories full of shooting and fighting much more than they love to see society and its way of life criticized.

So Odessa Young‘s angry face on the TV screen can only annoy these people, spitting in their faces truths about the hypocrisy of how most of these bigots fail to live by the rules they would like to impose on others.

However, putting aside the political aspect of this story which I would like you to discover for yourselves, even wanting to consider the simple entertainment side, it is a fantastic movie.

The first part is a grotesque and funny satire on American society; then, everything changes with the first assault in the house on these girls, which unfolds in a splendid and exciting single-plane sequence.

At that point, the plot resoundingly explodes, landing on a perfect ending that closes any questions.

This story’s heroes are all young women, starting with the stunning protagonist Odessa Young.

Here the actress finds the highest peak of her career so far, playing the classic girl so beautifully to intimidate as a bully.

However, the crazier and shakier the story gets, the more we discover how in reality, she is just a girl trying to be what society expects her to be.

She tries to be sexy, but if you are too sexy, people will judge you as a slut; just as trying to be a saint, you will be boring, and everyone will ignore you.

In her urban odyssey, she follows her friends Suki Waterhouse, Hari Nef, and Abra, of whom we see less of their backgrounds but are still well-delineated and different characters.

I especially liked Hari Nef, who was sexy and feminine, although she is the group’s member with a more aggressive and masculine attitude.

This girl figure is the focus of much disapproval, as many viewers and some critics reduce her to a mere cliché already seen in other movies.

However, isn’t it true that clichés work because they have a piece of truth? Perhaps, indeed, it is those uncomfortable truths that we do not want to hear or see around us.

Sadly, I think a movie like Assassination Nation reflects the beliefs of a slice of modern 2018 audiences.

The strange thing is that it has everything to entertain, such as action and romance, as well as blood and violence tempered by just the right amount of healthy humor.

Yet sometimes, something doesn’t click with the public and critics, triggering an opposite reaction in a negative opinion.

What do you guys think? Is there room for such a movie in your personal tastes?