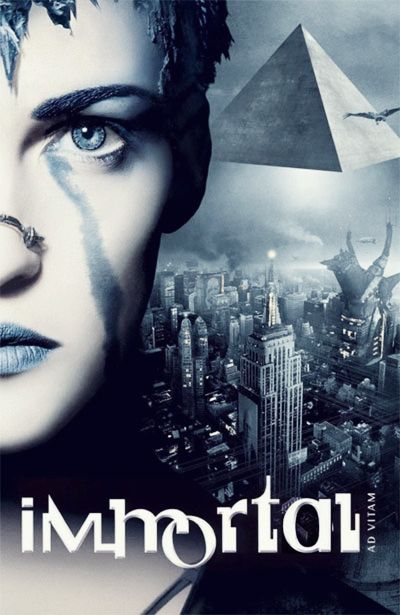 Despite the common belief that Europe is cinematically stagnant or has nothing interesting to offer, many horrors, action, or fantasy movies are coming out every year, such as the 2004 Immortal.

Everything unfolds in a hypothetical futuristic New York City, where a prison transport train crashes, plummeting to the ground from its track.

From the wreckage crawls out an inmate who was in hibernation, finally free after imprisonment of more than 30 years.

Unfortunately, he is in critical condition and cannot get far, having lost a leg during the crash.

Just by a miracle, the powerful god Horus arrives to help because he needs a human body to inhabit.

At that point, the fugitive becomes aware that a mysterious and ominous flying pyramid hovers above the city.

The fantastic wonder appeared above Central Park long before, after which the government evacuated the place since it became unlivable.

Then the god rebuilds his leg with metal, forcing him to be at his service and to find a mate he should give birth to his heir with.

They are not the only ones looking for this girl, who is a beautiful blue-skinned mutant.

Indeed, a powerful multinational pharmaceutical company’s agents are also after her since her semi-human condition may be the key to a decisive scientific breakthrough.

Thus begins a race to see who will find the precious prey first while the police, in turn, hunt down the convict who was once a dangerous political subversive.

However, the girl cannot remember who she is and her purpose because the drugs she takes to become human alter her brain.

Meanwhile, as the unstoppable god revolts the city to find her, the corporation puts the most ruthless hunter-killers on her trail.

Sci-fi, fantasy, and graphic novels from the core of Europe

Immortal is a movie showing off many styles of set design and costumes, albeit not having the best special effects of 2004.

Nevertheless, the Egyptian mythology influences blend intriguingly with the dystopian sci-fi days of a society totally under the domination of big corporations.

The result is a uniquely original fantasy we have never seen before, with an aesthetic flair drawing inspiration from a European comic series from which it entirely takes the mood without reaching the point of complete plagiarism.

Not surprisingly, next to the flesh-and-blood actors and actresses, we also have an array of fully computer-generated characters, setting up a believable ecosystem for a metropolis populated by aliens, mutants, and humans.

Despite the high budget and the presence of international stars such as Charlotte Rampling, the narrative flows with great simplicity without pretentious and unnecessary moments of boredom.

Director Enki Bilal holds the helm of this giant ship, crossing many different harbors remarkably well, taking on board many characters who each have their distinct role without wasting away.

Looking to make a comparison, what best reminded me of this movie is 1997’s spectacular The Fifth Element, albeit n that case, it had a lot more action due to the cinematic vocation of fellow French director Luc Besson.

Undoubtedly, the style differs significantly from the standard American blockbuster, taking the narrative’s meandering pace and ambiguous morality from the dark crime noirs in Europe, more commonly known as Polar.

I remember the first time I saw it; I arrived at the cinema that had already started, missing something of the story but was immediately struck by the visual power of this never-before-seen New York fantasy.

A sexy and exciting cast

Of all the characters who populate this world, the one who impressed me the most is the sexy mutant played by Linda Hardy.

The beautiful actress and former model have a delicate and vulnerable appeal, being a girl everyone seeks and wishes to imprison for their purposes.

Moreover, when Horus finally finds her, he has a very violent affinity, forcing her to have sex to impregnate her and continue his divine legacy.

As selfish and overbearing as this higher entity is, on the other hand, the man whose body he occupies, a former revolutionary who is now just a criminal on the run, is much more empathetic.

Thomas Kretschmann plays this character equally convincingly, painting a man lost for 30 years in a world he doesn’t know anymore.

In addition, the German actor is also very sexy for the beautiful ladies, building a lovely couple together with the heavily blue-rimmed protagonist.

Finally, as I mentioned, we have an actress of versatile charm and talent, Charlotte Rampling, whom I have adored since movies like Zardoz or Angel Heart.

In this case, she is a doctor who represents the sole voice of conscience of a ruthless corporation, trying her way to help the mutant girl yet continuing to study and keep her captive.

All these characters have the proper space for emerging in their overflowing and distinctive personalities, and each adds its special ingredient to a recipe cooked to perfection.

Despite its high cost, Immortal, unfortunately, was a movie that did not do well at the international box office in 2004 but became a cult hit for a small portion of fans on the web.

What do you guys think? Is there room in your collection for a French sci-fi fantasy?