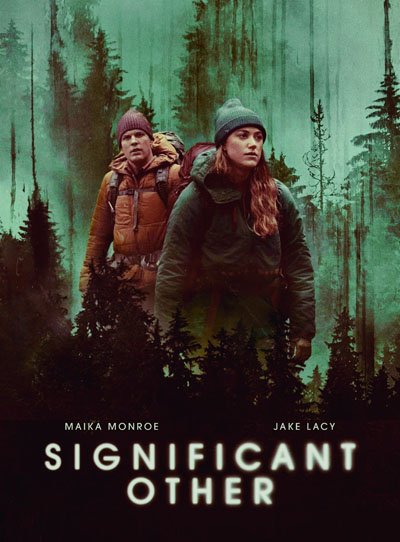 Alien movies cross over many movie genres with a variety of faces, something that is especially true in Significant Other of 2022.

It begins with a premise reminding me of Predator a lot, with a spaceship coming into our atmosphere from space and crashing at the heart of a forest.

Punctually, a young couple on their first joint excursion since their engagement ventures into that same forest.

The boy’s idea is simple: have a romantic walk through the trees along a path running all the way to the ocean.

Once they arrive in front of that magnificent view, he kneels down and pulls out a ring asking her to marry him.

However, she hesitates to accept, having experienced her parents’ terrible marriage as trauma and believing it is the end of true romance for a couple.

So she runs in panic into the woods, ultimately wandering far from her fiancé and eventually finding a strange cave among the rocks.

When the boyfriend finds her again several hours later, what is inside the cave will horribly change everything between these two lovers.

Without spoiling the plot further, working with a few compelling twists and turns, this romantic walkthrough becomes a no-holds-barred struggle for survival.

Of course, the alien crash landing at the movie’s beginning will be a foretaste of maybe even a large-scale invasion of the entire planet.

However, as is often the case in movies, the invaders underestimate humankind’s fierce fortitude, power of imagination, and passionate love.

Significant differences from others

Quite often, a movie doesn’t have so much of a story that is ultimately so different from others, yet the directing and writing make just enough of a difference, as in Significant Other of 2022.

Dan Berk and Robert Olsen continue to work together directing and screenwriting, punctuating the timing and revelations of this sci-fi thriller to perfection.

While the alien invasions fans may imagine a few surprises before others do, I’ll bet they will be scratching their heads cluelessly as I did for at least half of the duration.

Without much amazement, I have unfortunately read many reviews complaining about this supposed slowness in the narrative as if it were a flaw.

On the contrary, I believe that it is difficult to appreciate a story without a proper character introduction and background.

This is even more true if we talk about a low-budget production with four actors and a forest to work with. So, it would be foolish to expect the spectacular battles of Star Wars or other blockbusters.

Indeed, as I have already said, the twists and turns are not many. However, they always come at the least expectedly juncture thanks to excellent writing and the direction that slyly keeps essential information out of the picture.

The result is an excellent merry-go-round of emotions that keeps the interest and tension high, never having a moment of sag that ruins the cinematic illusion.

Even better, essential humor is always present that does not spoil the believability of the unbelievable, turning absurd situations into delightful entertainment in the best way possible.

So I can’t find any particular faults to shine a light on, instead stating that little gems like this will always be among my favorite movies.

Few actors but lots of talent

In a small movie like Significant Other from 2022, the cast is crucial in every minute of their performance.

At some point along the way, the protagonists meet another pair of forest walkers, Dana Green and Matthew Yang King.

This seemingly minor event is the perfect pause for the pivotal twist leading to the story’s last section.

By then, the perspective of what we thought we knew changed dramatically, and the movie became a proper full-fledged survival.

However, the main protagonists are definitely the two sweethearts innocently getting into much trouble as usual in these stories.

Maika Monroe again shows her talent after the phenomenal It Follows, which I do not hesitate to say is one of the best horror films of the new millennium.

Here she has the ungrateful pair role of a girl facing the hangups of a problematic life who wishes to open her heart but hesitates.

Of course, the traumatic experience she later has to face in the woods will not help her romantic side. However, at the end (again, without spoilers), love will save her life.

Equally good is Jake Lacy, who, on the other hand, is the normal, shall we say, side of the good guy who tries to be understanding and sweet toward his girlfriend.

However, the actor can give a very terrifyingly scary and funny performance a little later, changing his personality into a different role.

I don’t want to steer anyone’s opinions in one direction, but I hope you will enjoy this movie when you get a chance to see it.

Who knows, it may be that we will make enough noise by talking about it online to help productions like this that are finally trying to do something different.