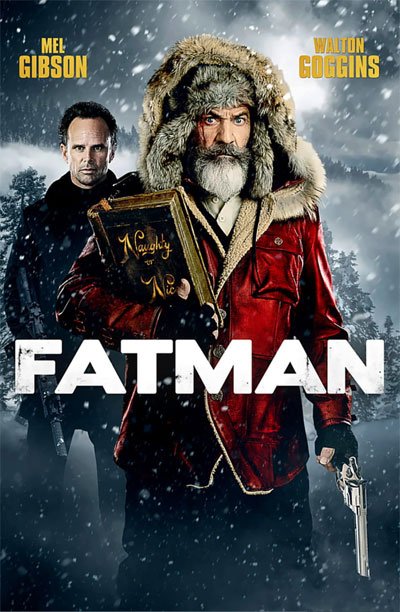 Maybe it is still early to start thinking about Christmas presents, so I want to be the one giving you this excellent movie so few have seen it in theaters in 2020, Fatman.

It is a movie also perfect for the holidays since it features one of the strangest and most intriguing cinematic incarnations of Santa Claus.

By this time, he is tired from his job, trusting poorly in humanity that never seems willing to change, actually getting steadily worse as the decades go by.

However, he continues to repeat his ritual, delivering gifts to children he deems worthy of receiving a reward.

Unfortunately, this does not apply to the arrogant son of a wealthy American family, who receives a lump of coal as a prize for his cruelty to others.

Unable to accept this snub, the little boy hires a hitman to hunt down and kill Santa Claus.

This hitman also carries a score to settle with him, having asked him for help during his unhappy childhood without ever receiving an answer.

So he enthusiastically accepts the mission, tracing the few clues that will lead to a small town in faraway Alaska.

Everyone calls Santa Claus simply Chris, knowing him as a man enjoying living away from the hustle and bustle with his wife.

However, business goes wrong, and to avoid quitting his job as a magical gift-giver, Chris must accept a government contract to build equipment for military aircraft.

So he is forced to keep his tireless little elves working even after December 26, who will be watched constantly by a U.S. Army platoon.

These soldiers, nonetheless, will be totally unprepared for the vengeful fury of the oncoming killer, who is willing to go on a massacre to come back with Santa’s head.

The Santa Claus you never expected

It is always exciting when an original script rewrites ancient mythology in modern form, bringing action thriller film genres into the most incredible stories.

Santa Claus becomes a supernatural creature who has superpowers, such as boundless strength and stamina or being omniscient about the lives of everyone he meets.

Who better than Mel Gibson, with his histrionic personality and hallucinatory eyes, could give as much power to this character?

After an unhappy period in his life and career, the actor is back in top shape with some splendid action movies such as Boss Level and Dangerous.

Although he went under the radar of the general public in 2020, I think Fatman is by far the movie where the former Mad Max gave his best performance.

Chris/Santa Claus is a tired, unmotivated man who holds his life together only through the unwavering confidence of his fantastic wife, the excellent Marianne Jean-Baptiste.

But of course, every hero worth his salt needs a worthy nemesis, and here comes the talent of Walton Goggins.

Emerging with the exciting role of a corrupt cop in The Shield, he is the one who has had the best career in the entire cast of that fantastic series.

Whether he plays a small part in Predators or American Ultra or is one of the leads in The Hateful Eight, the actor demonstrates all his skill and versatility at every opportunity.

In this case, he plays an unstoppable killer with a dark past who grew up during a terrible childhood, during which he unsuccessfully asked for help in his letters to Santa Claus.

So his unrelenting hatred of the jolly fat man is the real driving force of this movie, not to mention the naughty Chance Hurstfield, who plays his evil little instigator.

A naughtier Christmas for everyone to be good

Eshom and Ian Nelms write and direct a movie that deconstructs and reconstructs the Christmas myth from scratch, transporting it into a more violent entertainment genre for modern audiences.

Although there are many of nastiness and multiple killings, there is always a gentle irony that makes everything we witness less grim.

The clean cinematography thrives on bright light and is quite handsome, especially in the Alaskan snow; it almost seems like revisiting the Cohen brothers’ magnificent Fargo.

Of course, with such a spirit, there could be no shortage of criticism of consumerism that exaggerates the Christmas spirit by trying to pump up the sales business.

Even Santa Claus has to limit costs and work for the army when money is not enough, creating weapons that will kill against the basics of his lifestyle.

The spoiled little child, his great enemy, becomes the face of an America that wallows in wealth and comfort without striving to deserve it.

But even for such an obnoxious character, there is hope for redemption when Santa Claus himself visits him in the finale, realizing that simply sending a lump of coal is no longer enough today.

As is true of the god of every religion, Santa Claus becomes an invisible presence who will watch over his moves, ready to bring down his inexorable judgment if the child continues to be evil.

Wanting to reduce this story to its essential elements, Fatman is a 2020 movie about revenge, love, and redemption.

It may not be the most appropriate kind of Christmas entertainment to watch with children, but it is a little gem not to miss for adults.

So run and click the link below, and please let me know what you think about it with a comment.