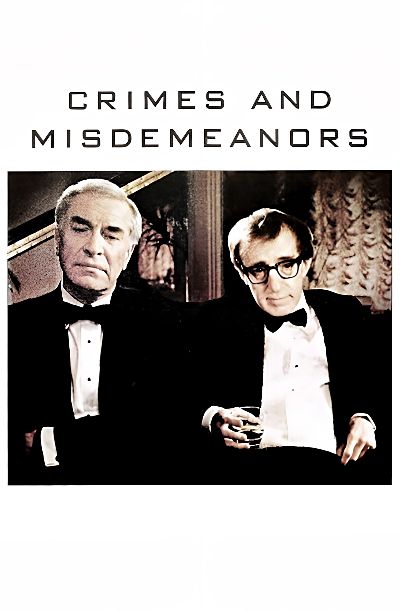 Today I want to recommend Crimes and Misdemeanors, a Woody Allen movie praised by audiences and critics in 1989 and is one of the best examples of combining drama and comedy.

The main characters of this story have two completely different lives, seemingly having nothing in common with each other.

Indeed one is a successful doctor with a wealthy family and well-respected by society, while the other is a jobless filmmaker caught in a soulless marriage.

However, what I have told you about the doctor is only the outward appearance since he has a secret relationship with a woman he met by chance on an airplane trip.

Over time she develops an uncontrollable obsession, demanding he reveals the truth to his wife and then divorce to be exclusive with her.

Failing to convince her to abandon this idea, he seeks help from his brother, who is a criminal and suggests murdering and shutting her up for good.

In the other story, instead, the director is trying to produce a documentary about an intriguing intellectual figure, a professor who enjoys making philosophy about life and the sad/comical human predicament.

However, to make the money he needs, he must work with his wife’s brother, an arrogant, womanizing TV producer who, among other things, starts courting the same woman he works and is falling in love with.

These two characters will meet only at a mutual acquaintance’s wedding at the end, where they will jointly take tragic and humorous stock of their incredible experiences.

An ancient tragedy in modern times

Woody Allen is a director who needs no introduction, having brilliant writing and elegant mise-en-scene making the trademark we all look forward to every time.

Crimes and Misdemeanors is a 1989 movie that is among the most perfect in his filmography in combining his dramatic style and the comic progression of the narrative.

As always, we return to the usual topics that the New York director loves to deal with: love, sex, betrayal, and the amusing hypocrisy of society and religion.

His character does not differ much from what we see in his other stories, such as the hilarious Hollywood Ending where he still played a director who goes blind halfway through the movie production.

In this case, I think the director he plays serves as a diversion from the main story with Martin Landau, relieving with comedy the intensity of the doctor’s drama on the brink of murder.

Alternating in this way, the narrative’s emotional intensity and the tragedy’s pessimism turned comically, making one laugh as usual with a bitter taste in the back of the mouth.

Allen returns to repurposing an epic as ancient as the Greek myths in an urban setting, as he had done a few years earlier with the devastating Mira Sorvino in Mighty Aphrodite, although in that case, the comedy was more direct and explosive.

However, the director’s character is also fascinating, a small man who dreams of a better life and to whom the doctor gives the cruelest response by saying YOU JUST WATCH TOO MANY MOVIES.

The story aims to give no morals or superior lessons since god doesn’t punish the guilty, just as he doesn’t reward the brave, sliding from charade to reality before the closing credits.

In this comic/tragic little metaphor of humankind, the most important things are encounters and clashes between characters.

Woody Allen does not move much from his canonical figure of neurotic, cynical, and sympathetic patient zero of that city/sickness called New York.

His character embodies the eternal struggle between film and television, where creativity and wit slowly die by merciless producers like the hilarious brother-in-law played by Alan Alda.

But even for him, there is a possibility of love with the sweet and sensitive Mia Farrow, a documentary filmmaker who falls in love first with his philosophical project and then with him.

However, this love remains atrociously unfulfilled with an unpredictable twist, but one that makes the ending more complete and bitterly funny.

Despite Allen’s sympathy, Martin Landau flies high above the entire cast by sculpting a performance of unforgettable catharsis with his character.

Though seemingly harmless as an everyday eye doctor, the man will discover a heart of darkness within himself that he wishes he had not found.

Even as circumstances lead him to murder his lover, the religious background he had forgotten will come back to haunt him with inexhaustible remorse.

Anjelica Huston is equally memorable in painting an intractable and uncontrollable woman, determined to ruin her man if he does not give her the genuine love she demands.

A few days ago, I recommended The Grifters, where the actress played a fabulous femme fatale, a role utterly opposite to the fragile but stubborn lover in this story.

Similarly, we can say that 1989’s Crimes and Misdemeanors is also, in its way, a noir movie, though without any element of the genre, yet describing a world without justice where happiness does not always go to those who deserve it.