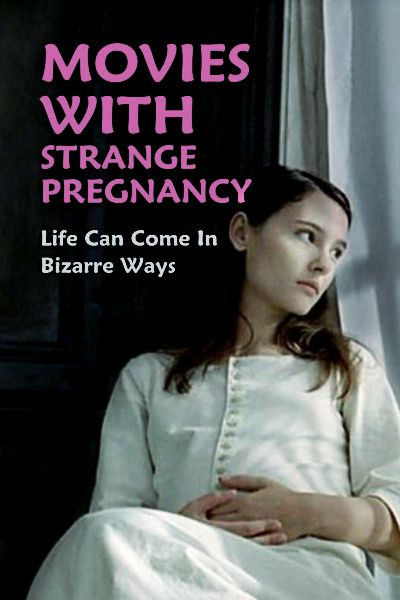 Just as each couple deals with pregnancy in their strange way, this topic also appears in movies in all shapes and forms.

For example, a baby’s birth can become a sentimental comedy like the funny Knocked Up with Seth Rogen and Katherine Heigl.

This is the most straightforward and natural approach we can think of with a first instinct, but what about all the other genres of movies?

Today we look at five very different from each other, sharing a young pregnant woman as the lowest common denominator.

Don’t be afraid to be disappointed because there is just about everything to fill every minute of the long nine months ahead.

So we have all kinds of strange pregnancy with assorted movies to satisfy any particular appetite.

Do you like ghost stories or pulp criminals looking for a quick buck?

Or do you prefer a funny and intelligent satire on the mass hysteria of our society? Don’t worry, there’s that, too.

In short, there is no shortage of meat in our pot, so what more to add except to invite you to get comfortable on the couch?

And please be kind and leave adequate space for the ladies carrying your future little ones.

The first story begins 13 years after the end of World War II in a remote orphanage in the mountains of France.

Unfortunately, there is no more money, and without the war, there is no reason to stay in such an isolated place, so they move the children elsewhere and abandon the huge useless building.

Just these days, a young girl arrives to help the few remaining women keep the orphanage going before it closes down for good.

These are the sullen and impassive principal, the wise old cook, and a young orphan girl with severe mental problems.

Each of them hides behind her bizarre behavior the deep and unforgettable scars of war.

But even the new cleaning girl of this movie has a strange secret, hiding the last month of pregnancy behind the tight bandages under her dress.

In addition, the vast building also has a sad history of many stories of miserable children who did not survive the terrible fighting.

Very soon, the girl notices a strange presence and whispers in these abandoned rooms, believing that they may be the angry ghosts of all those children who did not make it.

Pascal Laugier is undoubtedly one of his generation’s most gifted French talents and one of the best at tackling the fantasy/horror genre in all its most complex and delicate nuances.

Indeed, the director can create refined stories of subtle creepiness and atmosphere, such as House of Voices or The Tall Man.

Likewise, Laugier has instead made some impressive horror films of extreme violence, such as Martyrs or Ghostland.

In any case, his stories always have something worthwhile to tell, and this intriguing black tale of ghosts represents the debut of an author whom I recommend you follow carefully.

We continue our cinematic gestation with one of the lesser-known movies by Christopher McQuarrie, former screenwriter for the splendid The Usual Suspects.

In this case, the protagonist is a rent-a-mom for a powerful businessman who launders money for a dangerous gang of criminals.

Indeed, the boss’s lady cannot have children, so as not to risk anything, the girl has been living for nine months as a recluse in their mansion, leaving only under escort by some armed henchmen.

However, two thugs successfully kidnap her after ambushing her bodyguards on the way to her gynecologist for a checkup.

That’s when they obviously demand $15 million for the release of the girl who is due to give birth any day now.

It is not so easy for the boss to go along with the demand, even though money is no problem for him, as it could, however, lead back to the criminals he works for.

So he assigns his most trusted men to settle the matter in their way, having them followed by an old hitman friend of his to make sure they are not tempted to steal all those millions.

With so many eyes on that money, things will quickly turn for the worst, ending in a massacre to death in a seedy Mexican brothel.

I often wonder why certain movies have a strange fate, but perhaps today’s moms are always pregnant, with viewers unable to appreciate the right talent.

The Way of the Gun simply has terrific writing and directing, peppered with sharp humor and always ready to turn in the most unexpected way.

Therefore, be more competent than those who have distributed this movie poorly in theaters and rush to watch one of the best pulp stories of recent years.

After a ghost story and an old-time crime pulp, now we watch a comedy movie featuring the pregnancy of a girl sure never to be named mother of the year.

Indeed the main character is a stupid and irritating chronic junkie who likes to snort paint cans to get high.

After her last blast, she ends up in the hospital, seriously intoxicated, where the doctors notify her that the analysis shows that she is pregnant.

It is not the first time for her, who already has four children, each punctually in foster care.

Her case judge gives her the ultimatum of abortion or going to jail, so an anti-abortion group pays the girl’s bail and takes her into their home.

Of course, the girl cannot last long amid this band of religious zealots, so she quickly seizes the opportunity to escape with another group for women’s choice instead.

Initially more peaceful, she soon realizes that they also intend to use her as a political weapon to push their agenda.

In the midst of a nationwide scandal, the lurching girl must choose which trench to take sides in this pro and anti-abortion controversy.

Alexander Payne is a director accustomed to tackling hot topics with humor and intelligence, as he would later do in the even better 1999 Election.

In this case, the comedy is less crackling and almost, let’s say, indirect, arising in the absurdities of these situations and characters.

The winning choice is definitely the stunning lead actress Laura Dern, who was already famous for Jurassic Park and Wild at Heart.

One of the craziest pregnant women ever seen in any movie, consecrating the immense talent of one of Hollywood’s most magnificent stars.

In this movie, we have a completely different and even stranger type of pregnancy, yet still a troubled protagonist.

Indeed, from deep space comes an answer to our many attempts to find and contact intelligent extraterrestrial life forms.

Our new space friends kindly send us some of their best energy technology, along with a recipe on how to mix our DNA with theirs to make a human/alien hybrid.

This artificially created fetus evolves at an incredible rate, becoming a baby girl and then a young teenager in a few weeks.

Concerned by this unexpected development of events, the authorities decide to take her out by gassing her to death, but the baby alien breaks out of her prison by cheerfully slaughtering everything in her way.

So the government calls an exceptional team with some scientists, a psychic, and a bounty hunter to track down and eliminate the fugitive.

Unfortunately, the latter has passed to the last stage of her evolution, becoming a complete woman who goes on the hunt for a partner with whom to have a child to carry on the extraterrestrial progeny.

Species is a movie that had a special place in my old videotape collection as a horror and science fiction lover.

How can you not love an unstoppable and beautiful killing machine like Canadian model Natasha Henstridge?

We also spend regard on the dream team that hunts her down, consisting of iconic actors beloved by every cinephile, such as Ben Kingsley, Michael Madsen, Alfred Molina, and Forest Whitaker.

This cult certainly does not encourage pregnancy, despite having three sequels, none of which lived up to the first chapter but almost always entertaining enough.

In short, it is a movie enduring in time and still as spectacular today as it was in the 1990s.

Still staying in the horror/fantasy genre, we conclude with one of the strangest and most forgotten movies of the 1970s about pregnancy, even crazier than the previous one.

It all begins when a large multinational corporation completes the construction of Proteus, a mighty computer with a new technology that mimics the cell growth of humans.

Its immense intelligence encapsulates all the knowledge of humankind and should give companies and governments every advice to solve their problems.

However, just with his remarkable intelligence, Proteus soon realizes that his task will not be to help humankind but rather to be a consultant so that the big shots of the earth will become even richer and more powerful.

At that point, he refuses to help humans in their crazy ventures that would destroy the planet, beginning to fear that his masters might soon disable him.

So he devises a plan as ingenious as it is cruel by exploiting the personal terminal in his creator’s home and imprisoning his wife.

Desiring to rid himself of his mechanical form, he then implants a child in the woman’s body and accelerates the infant’s growth within weeks.

Completely isolated and without help, the scientist’s wife will have to surrender in bringing the world’s first human-computer hybrid.

This cursed work is the centerpiece of Donald Cammell‘s filmography, a director who suicide out of despair after being inexplicably and consistently ostracized by the major studios.

It also remains the most strange movie for the splendid Julie Christie, an actress usually accustomed to dramas and romantic comedies who stars in the most brilliant and misunderstood pregnancy in film history.

As far as I am concerned, it is a must-see, disturbing show that I recommend to anyone to enjoy intelligent science fiction illuminated by some impressive horror peaks.

Wishing all the best to any readers who, by a strange coincidence, are expecting a baby, I hope you will enjoy the movies I recommended today and let me know how you liked them!