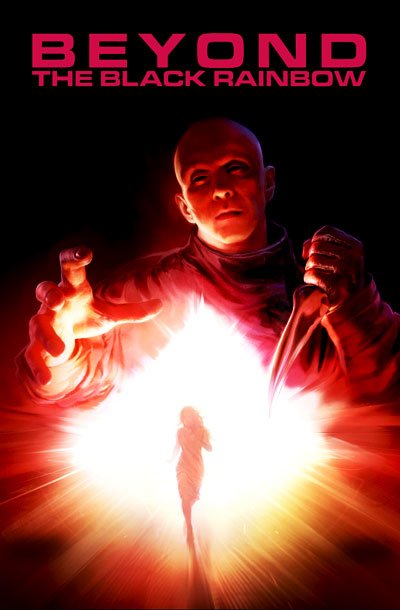 In 2010 Beyond the Black Rainbow arrived in theaters, an intriguing and fresh sci-fi horror movie that strangely few people noticed.

The story occurs almost entirely within an isolated research institute in the woods, set in an alternate 1960s past.

At the helm of the institute is a doctor who is as elegant and composed in demeanor as he is absolutely insane and psychologically unstable.

Among all the patients, he spends a great deal of time with a young girl whom he continually oppresses with his visits and refuses to let loose.

She is the outcome of an experiment the founder of the institute attempted many years before with a cryptic fluid that should awaken the dormant capacities of the human brain.

The ultimate goal of these theories should be to be able to unite science and spirituality, causing a new era of perpetual happiness to begin for humankind.

Even the doctor was a participant in the experiment, which ended in tragedy, and since then, he must take psychotropic drugs to normalize his situation constantly.

However, from that day on, he takes over and begins a new series of experiments to control these latent powers in patients.

Indeed, when he comes home every day, his wife thinks everything is normal, while her husband is slipping inexorably into total insanity.

His nurse pushes him over the edge when she secretly realizes his insane attention and sexual desire toward the captive girl.

Unable to accept this betrayal, he abandons his humanity and becomes an unstoppable killing machine, sowing death and terror in the institution.

At that point, the girl’s only hope is to escape before the doctor arrives to close their painful past for good.

Panos Cosmatos, to date, has only two movies in his filmography, which are 2010’s Beyond The Black Rainbow and 2018’s more recent Mandy.

Yet this filmmaker already seems to have solidified his visual and narrative style in a passionate homage to old-fashioned horror and weird science fiction.

His movies also have the slow and powerful pace of someone who knows what he wants to tell and manages to do so primarily through the camera instead of endless, overly explanatory dialogue.

In this case, we have a helpless princess facing a monster who endlessly torments her for no reason.

This mad doctor is a bit of a Frankenstein who creates uncontrollable creatures with shades of a Hannibal Lecter-like mad psychiatrist.

At the helm of this institute that would like to be a place that lights the way to the future, he creates a nest of monsters deformed in body and mind.

Cosmatos uncovers many subplots and characters with quotes and references to old classics, perhaps even too much in some circumstances.

But I do not see this as a flaw and understand a new director’s desire to astound by putting together ideas he has probably been cultivating for a long time.

Thus we find homage in the exaggerated colors of Italian horror films by Dario Argento and Mario Bava, with a touch of Lucio Fulci‘s unbridled sexuality.

In the editing style and the geometry of the spaces, there is always the old dear Stanley Kubrick, along with the flesh and technology themes of the good David Cronenberg.

Beyond The Black Rainbow is thus a movie that challenges the viewer to find clues to the director’s passions, from Solaris to Buckaroo Banzai, not to mention the claustrophobic and sexual angst of Brian De Palma’s Body Double.

When cinema is a worth experience testing

Panos Cosmatos‘ first feature is something out of the box, strange and unfriendly, which unfortunately will perhaps bore viewers accustomed to the higher pace of modern movies.

I have read several criticisms toward the ending that some think is stupid, perhaps not having realized that once out of the building, the girl unlocks all that potential that has gone untapped for decades.

I agree that perhaps young Eva Allan, while very beautiful, may not be the best actress in the world.

However, she honorably defends her part and is believable in what needs to be credible, including the ending mentioned above.

Instead, I thought the conclusion amusing, like a breath of freedom that evaporates the anguish and oppression built up previously.

On the contrary, I defy anyone complaining about Michael Rogers‘ performance, whose sharp face is a revelation of pure, lucid, and stubborn madness.

Playing this mad doctor omnipotent toward his patients reminded me of the total control toward the people in Orwell 1984, though obviously on a smaller scale.

Nothing escapes his eyes inside a technologically advanced institution that nonetheless sinks into a middle age of fear and depravity.

Indeed his fatal mistake is abandoning the place where he is a moody God whom no one can stop and contradict, but I will stop here so as not to spoil the story.

I will only mention the gorgeous retro techno music accompanying several sequences, a sensory experience as stimulating as Nicolas Winding Refn‘s psychedelic movies.

So let us experience together the ideas and passion of a new director coming to our screens, although Beyond the Black Rainbow was a very low-grossing movie in 2010.

However, we are not accountants and only care about good cinema.

The Bonfire Of The Vanities –...