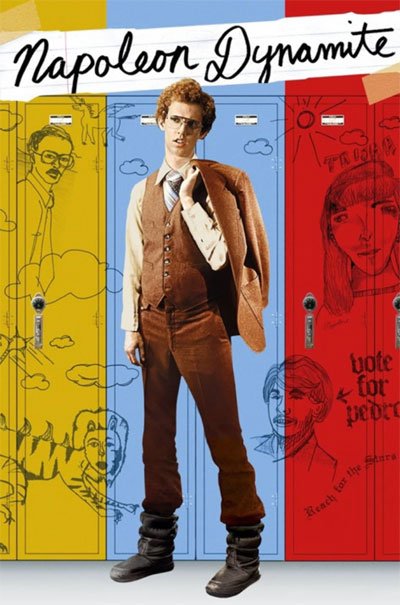 When I think of the best losers who have won in the movie game, 2004’s Napoleon Dynamite is undoubtedly one of the movies that come to mind.

The protagonists of this story are as far as you could think of from the bright and cool stars who populate the gilded world of Hollywood.

Indeed, overall we have the strange character of Napoleon, a teenager who seems to have stood still in time to when he was a child.

Around him, the other family members are not much more intelligent, starting with an uncle who was once a promising football player and now lives on small, precarious jobs.

His grandmother and brother are also peculiar individuals who spend much time cultivating virtual friendships and relationships on the Internet.

All the other students avoid Napoleon at school, deeming him a foolish and naive child, except for a young Mexican who has just arrived in town and has no friends.

He convinces his new friend to run for the upcoming school election to gain popularity and respect, although his odds are highly slim against the beautiful rival girl candidate.

Meanwhile, his uncle and brother begin a series of rambling product sales that only get him into trouble without making a single dollar.

Increasingly lonely and discouraged, Napoleon looks for a girl to go to the prom together.

Everyone seems to have found a girlfriend but him, even his new Mexican friend who will attend with a freaky girl who is into photography.

They all and even we will realize that in the end, maybe it is not essential to be famous or successful, but to be happy with what we have without giving up our dreams even if they make other people laugh.

As mentioned from the outset, despite being an uncool movie in every respect, Napoleon Dynamite was an immense box office success in 2004.

Indeed, against a budget of barely half a million, it grossed over $40 million worldwide and became a small and instant generational cult.

The atmosphere of merry madness is unforgettable, even though the protagonists are all, bar none, losers with no hope of change.

But don’t expect explosive frat-boy comedy like American Pie because the humor lives in the blank stares of these characters, who seem almost pharmacologically sedated the whole time.

This general state of apathy and the teen-movie locations create a visual and emotional short-circuit that remains consistently out of all stereotypes and banality.

The slow and bland pace is by no means boring but takes us back to the naive afternoons of our adolescence when we would hang out with our friends doing nothing just for the sake of being together after school.

So we forget James Dean‘s handsome and damnable appearance with his aggressive friends and crazy car rides.

Instead, we willingly enter the daily routine of Napoleon and this bizarre ecosystem of losers who have no shame in being unique and eccentric.

This grotesque circus of American suburban specimens has sympathy and softness that Jared Hess fully captures in every scene and shot.

We can understand the brilliant creativity of this director just by admiring the splendid opening credits, edited and created with simple and brilliant brilliance.

To sum up, why Napoleon Dynamite amazed me in 2004, I would say that I had never seen such a silly movie with such clever direction and writing.

A human zoo of weakness and friendliness

Surely not many will wish to be like this story’s protagonists, perhaps dreaming of being confident heartbreakers like James Bond.

Yet Jon Heder‘s character represents as common and ordinary as a teenager can be, bringing that awkwardness that not everyone wants to remember from their youth.

This is why it is so immediate to enter his life, without complicated backgrounds or flashbacks to tell us who he is.

Napoleon Dynamite is like all of us, as is his stupid but ultimately excellent and reliable uncle, played by Jon Gries.

How many like him dreamed of becoming sports champions when they played in the meadows with their friends? Be honest and don’t lie, at least to yourselves.

Equally realistic is brother Aaron Ruell, a chronic Internet surfer who gets involved in his uncle’s crazy schemes more out of boredom than genuine interest.

Looking for easy money, the pair of loser entrepreneurs never make the right choice, only annoying the whole neighborhood with their stupid products.

Also hilarious is Efren Ramirez, who seems almost like a Mexican Napoleon, with whom he not surprisingly bonds and becomes friends immediately.

His apathetic speech with which he runs for student elections is as monotonous as it is hilarious, not to mention the exhilarating dance to the notes of the song Canned Heat by Jamiroquai.

Finally, concluding this picture of mediocre grandeur is the sweet Tina Majorino, an aspiring photographer secretly (but not even that much) in love with the protagonist.

A few more scenes would have been nice, but at least in the finale is a scene where we discover her more beautiful than we thought.

You might not like this movie at first glance, but if you let it capture you, you will understand why Napoleon Dynamite was so successful in 2004.

Inside Man – An Astonishing Heist...