The Grifters – The Dirty Soul Of Old Time American Noir 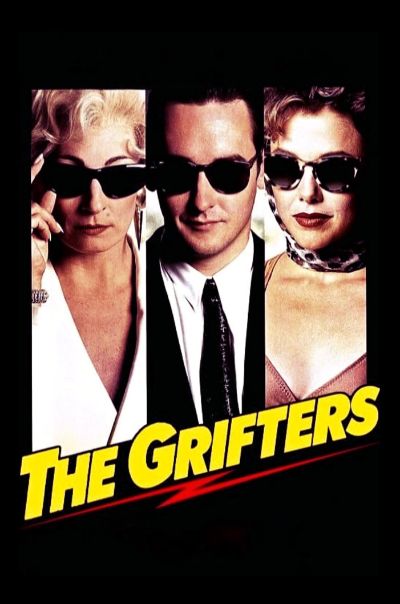 A good noir thriller needs to have a dirty world full of improper and morally reprehensible criminals, and in the 1990s, The Grifters is a perfect movie.

In this story, we follow three characters closely, beginning with a beautiful middle-aged lady who collects and places sports bets on behalf of a mafia gang.

One afternoon, however, she is forced to skip a horse race to rescue her son, who has been seriously injured during a fight.

The boy is a professional hustler who has never worked a day in his life and ended up in the hospital after trying to cheat a bartender out of pocket change.

When she catches up with him, she discovers that along with him is another girl who wants to convince him to get into the financial scam business even though he is not very interested.

The woman and the girl hate each other at first sight, seeing one in the other as a threat toward the boy they want for themselves exclusively.

Also, the girl is a hustler having a hard time, as her old partner completely lost his mind, leaving her alone.

The mother also finds herself in trouble since skipping the horse races gets in trouble with the gang boss.

Therefore, these women are at a point where they must change their lives by necessity, and the young boy seems to be the only chance for them.

However, he is not one to be easily fooled, so he keeps them at a distance without getting involved in their problems.

In an increasingly tense and unbearable atmosphere, this story of crime and love will come to a violent end for all of them.

When you have a producer like Martin Scorsese and the direction of Stephen Frears among the credits, there is every reason to have almost two hours of top-notch cinema.

Nevertheless, The Grifters was a movie that, unfortunately, grossed very little worldwide in 1990.

I would venture to say that today probably not many people remember it, although it is still one of the most solid and cruel noirs I have ever seen.

What makes this train ride is the story and characters, petty criminals in a world with no hope of goodness or redemption for anyone.

Indeed, no one trusts anyone, and everyone can cheat and kill everyone within a single moment without the slightest warning.

There is always a palpable tension since you can expect anything from such dirty and evil characters at any time.

However, it does not mean they are flawless, ultra-cool personalities who never make mistakes; on the contrary, their deceitful humanity makes them even more enjoyable.

They all stumble unexpectedly into nonsense by getting into trouble most stupidly, then making an even worse mess to get out of problems they wound into.

At all times, the dialogues are straightforward and tough as a punch right in the face, carving into stone the psychology of these little rascals and their dark little lives.

Of course, nowadays, scams and thefts work differently because of the internet and technology, yet the souls of these thieves will remain precisely as they were in 1990 and in movies like The Grifters.

Besides Stephen Frears‘ able direction, the magical performance of an acting trio in a graceful state keeps this movie’s heart beating.

Anjelica Huston soars above the rest in the role of a magnificent femme fatale who, though advanced in years, is still a sexy and irresistible bombshell.

This woman is as brutal and intelligent as the cruel gangster she works with, except her heart softens when her young son is in danger.

Although they have not seen each other for many years, she rushes to his aid and stays by his side even though he does not like her presence.

As we see in the terrifying final act, John Cusack plays arguably the most intense role of his career, hating and loving his mother in more than an ambiguous way.

His clean-cut young good-boy face is the perfect mask to hide a character with no morals or respect for anyone.

On his way, this boy meets his female nemesis, a stunning and brilliant Annette Bening, who is basically the younger version of Anjelica Huston’s character.

As for this girl, everything is simple: her mission in life is to make money and no matter who she will make suffer to get as much as possible.

We will never know if she really wanted to work with Cusack or screw him over, but the point is the total lack of trust that prevents each of these characters from really existing.

The Grifters is a movie that, in 1990, demonstrated how noir is a genre that constantly renews itself over time, being a reflection of the black soul of humankind.

If you have accidentally ignored it until now, remedy your mistake by clicking the Amazon Prime button below and rushing to watch it immediately.

Movies to Watch as a Couple – A very special evening