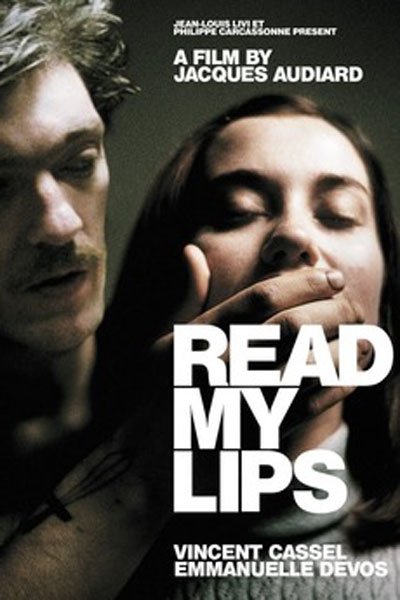 Today we discuss a very unusual blend of love and crime in a 2001 French movie that I don’t know how many will have seen, Read My Lips.

At the beginning of this story, we follow the two protagonists separately, although their paths will soon cross.

She is the shy secretary of a construction company who suffers from partial deafness, which isolates her entirely from others, along with her secretive nature.

On the other hand, he is a criminal who is fresh out of jail and must adapt to doing whatever job his parole officer keeps for him to maintain his temporary freedom.

Both these outsiders lead sad and lonely lives, with no real expectations of happiness for tomorrow.

Everything changes when the man starts work at one of the construction sites where the girl works.

She feels compassion for his situation and gets him a comfortable place to live among the company’s many new houses under construction.

To repay the favor, he aggressively intimidates some of her colleagues that mistreated and took advantage of her work.

By that point in their friendship, she feels a more profound attraction for him, which she cannot tell whether he reciprocates.

However, she will get to find out since they are about to spend much time together for a completely different purpose.

Indeed, he works a second job at a club where the owners run several illegal businesses.

When he finds out where his boss hides the money, he calls the girl to read the lips of his accomplices from afar and organize a plan to steal it.

Except the heist will be far more dangerous than they thought, and by risking everything, he also discovers to feel more than just friendship toward her.

The encounter/clash between American and French cinema

In comparison with other similar movies, Read My Lips from 2001 perfectly balances the romance and crime sides of the story.

The lack of communication of the protagonists toward the world pushes them into ever-closer complicity, becoming a couple without almost realizing it.

Neither has exaggeratedly astounding beauty, yet their ordinary charm makes them even more believable for their roles.

Jacques Audiard takes his inspiration from Alfred Hitchcock‘s beautiful thrillers, such as Strangers on a Train, where crime comes by coincidence.

However, the director, fortunately, retains his European spirit and soul, shooting many scenes outdoors instead of on a film set and getting a better immersion in this strange world.

It is a world so close to our own that we can almost brush up against it, where the different or the marginalized often end up forgotten and buried in nothingness.

The mise-en-scene and photography have a hard, realistic edge, except in the moments when the protagonists are so close that they almost touch each other.

Thus Paris becomes dark like New York, and we forget the warmth and color of the world’s most romantic city.

In addition, the choice not to explicitly show any sex scenes between them makes the tension even greater, exacerbating a desire they both cannot express.

Obviously, those looking for something as explosive and entertaining as Ocean Eleven will be disappointed, as this movie is tailor-made for anyone who wants a great blend of American and French cinema.

Just like the wonderful Galveston I mentioned yesterday, the two lead actors in this movie are crucial besides the direction.

Let us start with Emmanuelle Devos, a pretty and ordinary girl on the surface who, however, hides a universe of loneliness and unfulfilled desire.

Her growth throughout this story of love and crime is a path that astounds with her humble and convincing performance.

While hardly ever having moments where she goes over the top, her character rises in self-confidence, transforming herself from a lonely girl into an accomplished and strong woman.

Next to her does the same journey Vincent Cassel, who instead hides his innate sex appeal behind a crappy mustache and a sloppy, unkempt appearance.

His catharsis with this sleazy and dirty character is phenomenal, going from a lying, cowardly criminal to a brave knight for his beauty.

Indeed, his feelings and responsibilities develop even though he initially seems to feel nothing toward the girl except for a sexual intercourse approach he attempts more out of gratitude than actual desire.

However, after getting used to her presence at some point, he can no longer go back to being the selfish man he used to be.

Unfortunately, Read My Lips was not a blockbuster movie in 2001, but I have noticed it has many admirers online, among whom I include myself.

I love stories where the characters’ psychology is well-defined, without requiring lengthy and tedious explanations and useless filler dialogues.

Quite the opposite, Jacques Audiard does his job beautifully with bravura directing and the talent of his actors to act with looks rather than words.

That said, read my lips carefully: WATCH THIS MOVIE!

Mother! – The Thrilled Art Of Life And Death

Undead – An unlucky but hilarious...