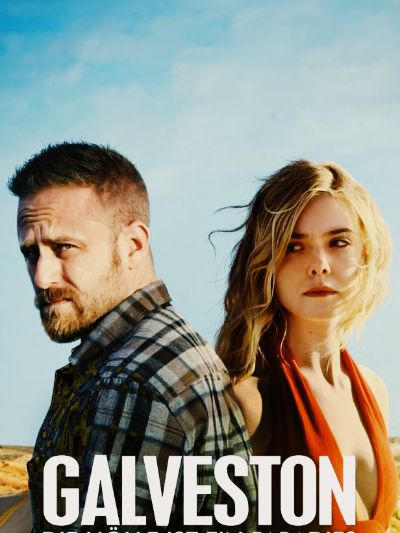 Some movies appear and disappear in the span of a cinematic season, such as this splendid 2018 Galveston.

From the beginning, we follow a small criminal struggling in a bad situation, having left hopes and family in the past.

Even his future is certainly not bright, since he is suffering from a terminal illness and his days seem to be numbered.

Everything changes when the boss he works for one night assigns him to clear out a house full of adversaries.

Except the job is actually an ambush in which the man survives by sheer luck, succeeding in killing everyone.

Yet someone survived the massacre, a beautiful young girl whom the criminals were held captive.

Both cannot go home again, so they decide to leave town, putting as much distance from everything familiar as possible.

Along the way, however, the girl makes an unexpected detour to the home of her terrible stepfather.

The hateful older man is holding his daughter and won’t let go of her, so she kills him without the slightest hesitation.

At that point, this little makeshift family becomes pursued by both the criminals and the police.

Therefore they decide to stay together, having no one else in the world to trust, living in a tiny hotel in Galveston.

While waiting to decide what to do with their future, the strange situation finally causes the man to feel something toward someone else after a long time.

But the problems they have left behind are not going to disappear overnight alone, making the price to pay far worse than they imagined.

An atypical noir with a damned soul

Mélanie Laurent is a French actress whose beauty and talent I had already admired as a leading lady in Quentin Tarantino‘s Inglourious Basterds.

A similarly handsome role she played, albeit in a minor part, in Denis Villeneuve‘s excellent and little-known Enemy.

The actress became a director, starting with two slow-paced movies with a distinctive and personal atmosphere, such as Respire and Plonger.

2018’s Galveston establishes her maturity behind the camera with a narrative quite different from the usual American-style adventure stereotypes.

The evolution of the romance between the main characters is lovely while remaining unfinished and unfulfilled.

Without needing dialogue with immense explanations, Laurent lets the images do the talking with her actors’ desolate locations and suffering faces.

Thus, the small, dingy hotel outside the confusing life of the city becomes an unspoiled corner of paradise.

A paradise where this man and woman with cursed lives finally believe they can start over, along with the little girl who represents new hope for both of them.

They each have their own demons and regrets, and no one is innocent or pure in this story.

What is decisive about the direction is that it stays away from the rhetoric of redemption and the stereotypical kinds of this noir genre proposes.

You will hardly find in other recent movies such a well-balanced blend of grief and anger, just as the ending remains suspended between heartbreak and hope for a better future.

As far as I am concerned, Galveston is a movie that, in 2018, shows many aspiring filmmakers what filmmaking should be.

However, if you do not have the wisdom and patience to let this story captivate you, perhaps I do not know if it is a movie for everyone.

The strange fate of certain movies

Besides Mélanie Laurent‘s excellent direction, we also have a memorable performance by a cast at its peak of role identification.

Ben Foster is an excellent rough and tough criminal, with few words and hasty methods.

A man who believes he has nothing more to ask of life, shut away in his world of personal suffering and frustration.

The actor is the main engine that initiates all the story’s events, with an intriguing background almost all indirectly told.

Equally good is the beautiful Elle Fanning, beautiful as she was in The Neon Demon, being as lovely and sad though capable of suddenly becoming aggressive and dangerous.

She is a seemingly innocent victim, yet a criminal with dark sides that Foster’s character soon learns about.

The girl has had a problematic childhood along with her child, giving the dying killer one last reason to live and fight.

These outsiders cannot find a place in the world and initially do not trust each other.

However, when they spend time together, they discover there is still a slight feeling in the depths of their lost hearts.

I often cannot understand marketing choices in the production or distribution of movies, and 2018’s Galveston is just such a case.

This is the only explanation I can find for the paltry receipts of a story that expresses a European-American style by bringing the pace back to the noirs of the 1940s.

However, Mélanie Laurent does not want to portray solid and cool characters as the old Humphrey Bogart might have been, keeping their fallacious humanity believable.

I, therefore, conclude by passionately recommending that you give this unique story of love and crime a chance, writing to me afterward if I was completely wrong or if you liked it too.

The Feast – Last Dinner You Never Want To Have