The Feast – Last Dinner You Never Want To Have 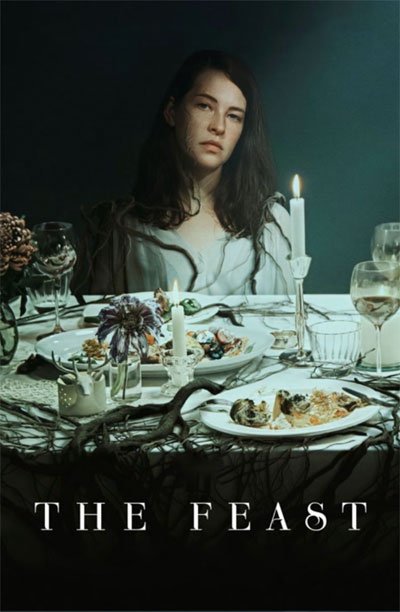 Nature’s vengeance and faceless justice are the main themes of the horror fable The Feast, a 2021 movie that, in my opinion, deserved more attention from audiences and critics.

It all begins in the heart of the Welsh countryside, where the lady of the luxurious house is preparing for a necessary dinner party that will take place that evening.

The dishes are ready, as are the elegant and refined tablecloths and cutlery for the occasion.

To help her manage the evening, the woman hired a young girl who would serve as a waitress by serving the courses to the guests.

The biggest concerns come from her two sons, two different characters with unpredictable and antisocial behavior.

The younger one suffers from a rare disease and must keep his body and diet under control.

While the other has a history of drug abuse, for which the family has decided to remove him from his bad friends in London.

Finally, her husband seems to have become a cruel psychopath, especially after striking a big deal with a mining company.

Indeed, the purpose of this dinner is precisely to convince his sister to grant him drilling rights to her part of the land.

But although it seems like an ordinary, almost mundane event, we know that something is profoundly wrong and something terrible is about to happen.

Strange things happen around the house, like the father hearing unbearably nonexistent noises or a son’s wound that won’t heal.

And behind each episode is always her, this creepy, silent girl who roams the rooms with a plan that only she knows.

With its inexplicable charm and a plot open to many interpretations, The Feast is undoubtedly one of the best horror movies of 2021.

The familiar setting where the tragedy takes place reminded me much of The Lodge, slowly but surely enveloping the protagonists in the same dark despair.

While the supernatural element is undeniably present, the feeling we get most is that it is nature itself taking its revenge on this wealthy and snobbish elite group.

The first clash is thus, even before the people, between the cold modern style of the house versus the meadows and woods full of life that surround it.

When this life feels threatened, an avenging angel arrives at that point to restore the balance that is in danger because of humans.

Human greed is thus the monster against which lies what we can describe as an ecological fable with horror overtones.

A fable that takes inspiration from folk folklore as did, for example, Ari Aster‘s splendid Midsommar.

But how does this movie work?

Each scene goes on with a growing disquiet that gradually becomes the characters’ atrocious realization that they have no way out.

The narrative explicates many facets marginally, yet the plot essence is undeniably evident in a simplistic fashion.

Obviously, it is not a movie for everyone; having a slow pace is a far cry from horror films that rely only on jumpscares like the Llorona or the various Annabelle chapters.

Terror, in this case, arises toward a range of characters we dislike but ultimately pity all the same because of the fate they will come to.

Style then is equally as important as plot since it elevates the fable to unforgettable myth status.

A modern fairy tale in Gaelic

Although Lee Haven Jones had only a predominantly television experience so far, he gathered many fans after this film debut.

Indeed, The Feast of 2021 is one of those horror movies that stand out, like David Robert Mitchell‘s frightening It Follows.

In addition to the ecological background plot and narrative style, another good choice is to have the cast act in Welsh for better estrangement from reality.

Annes Elwy plays the most disturbing character, without a doubt, seeming both delicate and dangerous simultaneously.

The actress has that disturbing charm that evolves into atrocious psychopathic looks in a climax of madness and violence against the dysfunctional family for which she must serve.

Nia Roberts is undoubtedly the most convincing of the entire family unit, trying to keep up appearances about the impending tragedy unleashed on them.

Also perfect are the two young Steffan Cennydd and Sion Alun Davies as the two spoiled brothers but, in their way, also victims of a domineering father and an absent mother.

If I am honest, I did not like Julian Lewis Jones very much as the corrupt father and politician.

This is not so much because of the actor’s performance, which I thought was good, but because of a character who needed more scenes and lines to stand out.

However, even this character comes out in the terrible finale, where he finally explodes entirely with the madness we see only a few flashes before.

In conclusion, I am thrilled with the first movie from what looks like it could be a promising director who could perhaps take Welsh cinema beyond its borders.

So if, like me, you appreciate this way of understanding horror with slowness and atmosphere, get the word out about this priceless little gem from Wales.

Anonymous – The Hidden Life Of...