Isle Of Dogs – Astonishing Puppets In Awesome And Sweet Poetry 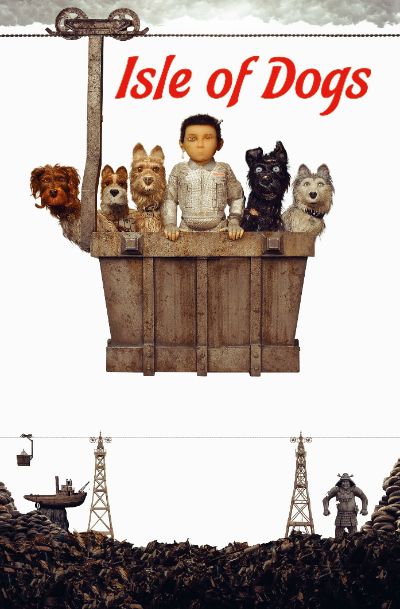 For anyone looking for an animation movie that works for young and old alike, there is nothing better than 2018’s Isle of Dogs.

It is a highly sought-after opus by Wes Anderson, a director with a unique and inimitable style and sensibility.

The story begins with a plane crashing into the Megasaki landfill, a place that is a ghetto for all the city’s dogs.

Because of a highly contagious incurable epidemic, the government has chosen to exile these sick animals in that forgotten place.

Indeed, the little boy coming out of this plane is the son of the mayor who signed the decree, condemning his little dog to be a prisoner of the island.

A group of dogs immediately rescue him, obediently wagging their tails since they are all former pets loyal to their human masters.

Only one has always been a stray and is, therefore, wary of the little boy, convinced that he will end up getting them all into trouble.

This stray has never wanted to obey his masters, ending up locked up several times for even biting some of them.

However, he will help most in the boy’s search for his dog in the most distant and dangerous part of the island.

Unfortunately, the mayor and his political party have had enough of that situation, even covering up the discovery of a vaccine for the disease.

Wanting to end that story quickly and brutally, they then decide to start a countdown before poisoning all the animals on the island.

But they haven’t reckoned with a small group of young, fierce animal rights activists, who will do everything they can to save the dogs from their grim fate.

Isle of Dogs is a 2018 animation movie that narrates complex themes about intolerance, dictatorship, and racism through gentle touches.

Wes Anderson returned to using stop-motion after Fantastic Mr. Fox, his first foray into animation in 2009.

The director avoids using CGI by entrusting puppeteer Andy Gent with the mammoth creation of thousands of models to animate one by one.

In addition to these beautiful puppets, the Japanese philosophy and aesthetic are perfect in each directorial and screenplay choice.

Every location has something to admire, from the luxurious mansions of dictators to the filthiest dump sewers.

Against this background of great perfection is a story that is both naively funny as much as it is exciting and ingenious.

Sadly, the prison island for these dogs becomes a small micro-world, which is an acute metaphor for all of human history.

It is a dirty and polluted place, bustling with the scraps of an overpopulated city that has lost its soul in exchange for fake security.

One can hardly avoid comparing dog sickness and the COVID plaguing us for years, forcing us to downsize our lives and relationships.

Despite the sadness of many situations, Anderson enlightens the narrative with optimism and an urge for rebirth and reconstruction.

I hope this movie can be a fine introduction to an eccentric but always original director for those unfamiliar with him.

As I said at the beginning, the story is only apparently for children.

With their life experience, indeed, adults will appreciate many situations that the younger ones have not lived in yet.

The voice of incredible poetry

Isle of Dogs is a brilliant, funny 2018 movie defending the weakest and most mistreated by society.

In addition to excellent puppet animation work, it also took a great cast to dub all these characters.

Among the many dogs, the one I most preferred was Chief, perfectly voiced by the great Bryan Cranston.

The actor embodies with his voice the prototypical outsider, whom we can say is the suffering voice of the whole story.

An animal who does not understand others and whom others cannot understand isolated in his pain and by distant mistakes that he cannot right.

Even for him, there is a chance to love again with the sexy Nutmeg, a show dog with the sultry voice of Scarlett Johansson.

By this judgment, I do not mean to belittle the other dogs in the pack, brought to life by such excellent voice actors as Edward Norton, Bob Balaban, Jeff Goldblum, and Bill Murray.

Finally, Koyu Rankin is also good at voicing the son of the ruthless (but not all the way) Mayor Kunichi Nomura.

Not an easy role, as is that of all humans who speak almost exclusively in Japanese, with rare exceptions.

Finally, let us also mention some of the secondary characters’ voices, among whom I noticed musician Yōko Ono.

The rest of the ecosystem boasts actors who add enormous charisma, such as Frances McDormand, Tilda Swinton, Harvey Keitel, and F. Murray Abraham.

Wes Anderson molds all these voices into a marvelous symphony that accompanies the images, not surprisingly, with music drumming like a military march.

Let yourself dream with the beautiful creative poetics of an invaluable auteur; it may be for you the beginning of a grand love affair with this director.