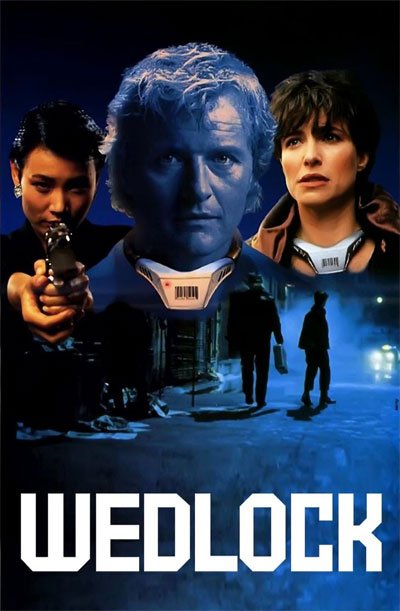 Rutger Hauer was one of my all-time favorite actors, whether he was in Blade Runner or a small sci-fi action movie like 1991’s Wedlock.

The great Dutch actor has always had a knack for being both cool and loser at the same time with the outcast, off-the-wall characters.

In this case, he plays Frank Warren; a former engineer turned leader of a small gang that wants to rob the vault of a private bank.

The heist is only partially successful, as they go in and steal a large bag full of jewels and diamonds.

But once outside, the police discover them, and a shootout ensues, so they have to escape by separating.

When he finds his partners, who are his kinky lover and his old best friend. They betray and shoot him, believing he is dead on the ground.

However, Warren survives and ends up in a new prison without walls or surveillance, with a strange collar around his neck.

This is the only but highly effective security measure that guarantees there are no escape attempts.

Indeed, each inmate has a twin; he does not know whose collar is on the same frequency. If the two stray too far apart, the collar explodes, decapitating both instantly.

Unfortunately, the prison warden knows exactly who Warren is, just as he has hidden somewhere $25 million worth of loot.

So he begins to make life impossible for him to talk, turning the most violent inmates against him and repeatedly confining him to solitary confinement.

However, Warren does not give up, and when he discovers that a girl is his synchronized-collar twin, he spectacularly escapes by exploiting a fight.

With his new female friend, he sets out searching for his money, with former associates and the police constantly on his tail.

The solid and reliable 90s style

Wedlock is a 1991 movie that is heavily in debt to The Running Man from a few years earlier.

The action style is very similar, just as the idea of the exploding collar is exactly what we see at the beginning of Arnold Schwarzenegger‘s adventure.

Of course, the script was much more original in that case, relying on Stephen King‘s excellent source novel.

At the helm, we have Lewis Teague showing good craft as previously in Cujo, which also started from a classic by the same writer.

In this case, the criminal, futuristic setting is not always used to its best advantage, coming across very much like our present.

The action relies solely on the fact that the two protagonists must stay close all the time; otherwise, their collars start ringing, heralding an explosion.

Yet, from this simple premise, the director makes solid and entertaining entertainment with scenes that alternate between different situations and emotions.

Therefore, we move from a heist movie-style roguelike beginning to a futuristic dystopian prison setting.

The second part is triter yet shinier, involving the runaway of two characters who cannot stand each other yet must stay together.

The ironic approach is a classic element of movies of those times, something that is often lost today for a more realistically tedious process.

I don’t deny that the plot and character development are predictable, but everything is so cool, compelling, and funny that you can’t help but love it.

So I have no problem with those who want to label it a low-budget b-movie.

As long as you don’t overdo the criticism and also honestly acknowledge its merits, which is precisely why I recommend Wedlock of 1991 to practically anyone.

An interpretation that will blow your head off

In addition to Wedlock‘s 1991 cartoony action style, the movie rests its foundation on the usually resounding Rutger Hauer.

The actor was already in his late 50s, somewhat tired and overweight, yet his inimitable charisma carried all the cast along.

Throughout the first part, he ironically lends himself as the victim, whom the other characters use as a punching ball.

But from the breakout onward begins the redemption of a man with more than one score to settle and a big bundle of money to make up.

In this phase, the wonderful Mimi Rogers is his companion, and she is just as stubborn and unbearably funny as him.

The actress was in her early thirties and displayed extraordinary sex appeal and great athleticism in long runs in action scenes.

The same year she would later give an even better run as the lead in The Rapture, an intriguing religious fantasy horror film.

As is often the case with action movies, the hero needs a level-headed antagonist.

Here we have the bespectacled warden Stephen Tobolowsky, seemingly harmless as an accountant but sadistic and greedy, worse than his prison inmates.

In addition, there are the two former gang associates who betray him after the robbery, the insane James Remar and the magnificent Joan Chen.

The latter is the girlfriend who does not hesitate to shoot at him to steal his money, but I would personally also get shot very happily by such a sexy woman.

In summary, I consider 1991’s Wedlock one of the best examples of how directors should always make entertainment movies.

Despite being a small production forgotten by many, I believe movies like this shape pop culture even better than those who win Oscars.

Isle Of Dogs – Astonishing Puppets In Awesome And Sweet Poetry