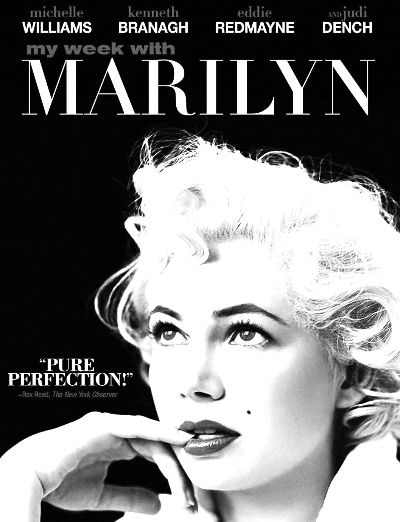 On the occasion of the Venice presentation of Blonde, today I wanted to tell you about another 2011 movie about the divine Marilyn Monroe, My Week with Marilyn.

We follow this slice of biography of the great Hollywood diva through the eyes of Colin Clark, a well-known British documentary filmmaker.

In 1950, however, he was still a young boy who had just dropped out of college in search of his fortune in the movie business.

His dream is to become a director, although he realizes he will first need to make it through the ranks to succeed.

So he exploits his superficial acquaintance with the legendary Laurence Olivier to get a job on the set of The Prince and the Showgirl.

Desiring to acquire experience in the business, the young man becomes a handyman assisting production in solving minor problems.

One such problem is finding a home for the movie’s star, Marilyn Monroe, whom the press welcomes in a frenzy of fanaticism at Heathrow Airport.

Despite the confusion in the face of such adoration, Clark cleverly handles the situation by finding a place reserved for the lady and her husband, Arthur Miller.

In the following weeks, unfortunately, the actress severely tests the patience of director and actor Olivier.

Indeed, Marilyn always arrives late for work and sometimes does not even know the script and her daily lines.

But her beauty and charisma are undeniable, so Olivier asks Clark to help her separate from her entourage for a few days.

With a catch, the boy tricks her husband and agent into taking Marilyn to the peace of the English countryside where he grew up.

Clark will then have a chance to get to know the star up close, loving her passionately and worrying about her weak and restless soul.

The most beloved goddess in the movie Olympus

My Week with Marilyn is a 2011 movie focusing on a limited period in the actress’s life.

This choice allows for a different realization, unlike the recent Blonde, which is a broader look at her life since childhood.

Honestly, I cannot say how accurate and truthful this section of Marilyn Monroe‘s biography is.

All I can say about it is that this movie carries the spirit of the cinematic dream machine with solid elegance.

First, it is exciting to follow how English movie productions worked, deriving from the theatrical origins of 1950s England.

From faraway America, the fantastic Marilyn arrives like a hurricane amid the manic precision of these film professionals.

This biography does not try to tell us about a perfect actress and does not fail to recount even the famous actress’s silly little tantrums.

But paradoxically, even these moments when she is irritating and tedious only make her all the more charming and desirable.

Everyone had an opinion about this actress, whom men saw as a perfect doll, and other women judged her as a vain and pretentious child.

However, who was actually Marilyn?

This movie does not delve deeply into the subject, resting comfortably on her aura as an object of supernatural desire.

Just talking about the art made of the same stuff as dreams, who has made us dream more than this gorgeous Hollywood blonde?

Time and death cease to exist for women like her, crystallizing their eternally young and beautiful faces as if they were paintings hanging in the most beautiful museum in the world.

So let us not look too hard for realism in this British/American production, but let us be seduced for an hour and a half by this cinema goddess.

A perfect carousel of movie stars

Since this story is about actors and actresses, the cast is as crucial as ever in this movie.

Unfortunately, the script fails to highlight many characters, although there are actors of the caliber of Toby Jones and Judi Dench.

Instead, the three main characters in the whole affair are absolutely extraordinary.

First of all, Eddie Redmayne is terrific as a young Colin Clark, an aspiring filmmaker entering the filmmaking world for the first time.

His performance is calibrated with talent and admiration, becoming an excellent sidekick for the two stars struggling in this production.

We see right from the start Laurence Olivier, already a film legend whom I remember from the days of the great Alfred Hitchcock‘s Rebecca.

Kenneth Branagh charismatically plays an actor going through a personal and creative crisis.

It is no coincidence that this movie led to the ultimate shipwreck with the beautiful actress Vivien Leigh.

Finally, in the role of Marilyn Monroe, we have an excellent Michelle Williams, who gives honor to a movie legend with class and elegance.

Her Marylin is believable when she makes repeated mistakes on set or has her private moments of alcoholism and depression.

I do not want to and cannot compare with Ana de Armas‘ recent performance, not having yet been able to see Blonde.

But when the smile breaks out on Williams’ face, the whole scene lights up along with her and flourishes like a meadow in spring.

Finally, I feel very sorry for the good and beautiful Emma Watson, who would have deserved more space in one of her first roles away from Harry Potter.

In short, what are you still waiting for? As in this 2011 week dream with Marilyn, she will always be waiting for you on her movies, more beautiful than ever.

Movies to Watch as a Couple...