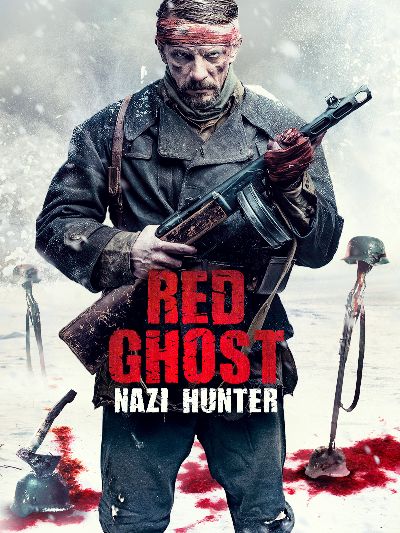 When we think of war movies, we usually think of big American productions and not something from Russia like The Red Ghost of 2020.

The protagonists of this story are hardly heroes; instead, they are deserters fleeing into the woods away from the Nazi advance.

This diverse group welcomes former soldiers, officers, and hunters trying to survive without being part of the army.

Among them is a pregnant woman who, despite her condition, is as effective as the men when she has a rifle in her hand.

After a long pilgrimage of toil, hunger, and cold, they finally find shelter in an abandoned and relatively undamaged farmhouse.

But the place is a trap to lure people in with a table laden with tempting but poisoned food.

A short distance away, a platoon of Nazis advances toward them, led by an icy and ruthless young officer.

However, their goal is not this insignificant group of survivors but to kill a lone soldier whom everyone calls The Red Ghost.

He appears to be an infallible sniper who has already killed countless Germans, arriving and disappearing into thin air just like an avenging spirit.

Most of the group is away as the Nazis arrive at the farm, unfortunately, except for the girl who is now close to giving birth.

At that point, the other men must decide whether to flee or try to fight a larger and better-armed enemy.

But fortunately for them, the dreaded lone sniper emerges from the woods and single-handedly turns the tide of battle.

However, even though he is not invulnerable, it will be up to ordinary men to be heroes for a day when he is badly wounded.

The great war of Russian people

Despite the World War II setting, the overall mood of The Red Ghost is that of a strange action western movie that arrived late in 2020.

Not surprisingly, the script leaves out significant famous war episodes, focusing on the survival of anonymously believable people.

Even the German platoon at heart is a small handful of soldiers without armored vehicles or exceptional weapons at their disposal.

The western moments work with a soundtrack reminiscent of the late Ennio Morricone, the historic voice of Sergio Leone‘s classics.

Moreover, this style of choice brings the duel back to a human dimension, even tragicomic, at certain moments of the battle.

Thus we have the young Nazi commander caught by bullets naked while taking a sauna, fighting the whole time with his butt cheeks exposed.

Or the young girl who gives birth, screaming as the enemies throw hand grenades from the windows, fighting death as she gives birth to a new life.

Despite being a small battle, the confrontation is spectacular and entertaining in its fundamental silliness, both on one side and the other.

In this context, the figure of the Red Ghost stands out in an almost super-heroic way, with this silent, deadly soldier advancing unstoppably.

However, fate strikes him in an almost stupid way, but a new hero is born from his death.

Being an unnamed soldier, indeed, anyone can assume his role and will then find someone to replace him in his fight for justice.

There is no glorification of Russian patriotism, as the story wryly addresses a little piece of 1940 history no one talks about.

Faces of war coming from the east

Andrey Bogatyrev convincingly directs a war movie with personality and style, standing out from the many similar ones in the genre.

Although Putin’s Russia does not enjoy a good reputation for political reasons, Russian cinema productions confirm an excellent state of health.

Indeed, 2020’s The Red Ghost comes after other solid examples of excellent entertainment movies, such as Sputnik or The Blackout: Invasion.

The cast is also terrific, despite having for us Westerners many unknown names, such as the granite lead actor Aleksey Shevchenkov.

Remaining constantly in rigid silence, he acts only with his eyes, like the old Clint Eastwood when he was the nameless gunman with the poncho.

The direction lingers on his movements, following them with elegant camera movements, compared to the more agitated shots of the other characters.

What results is a hero who starts looking invincible, becoming more human minute by minute, even though we will never know much about him.

Of course, every hero needs a thick villain to contend with, a role that Wolfgang Cerny fills to perfection.

The Austrian actor wears the Nazi uniform with just the right amount of madness and cruelty, offering a tremendous challenge to the protagonist without giving in to his obsession.

Among the various extras, I want to mention the sympathetic Mikhail Gorevoy, who plays a comedian whom the Nazis repeatedly mistreat.

To him goes the honor of opening and closing the movie in a circular narrative that brings violent justice to the ranks of the Nazis.

To sum up, 2020’s The Red Ghost is primarily an action movie, with a Western atmosphere amidst a location of snow and blood a la The Hateful Eight.

Leaving aside the politics and the current moment in Russia, let us enjoy the spectacle of a well-told and accomplished story.