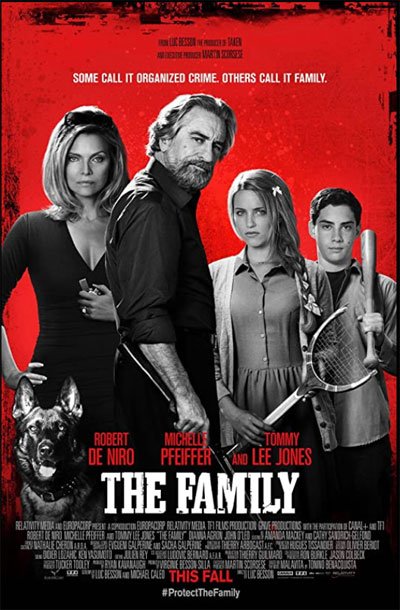 Today we discuss The Family, a 2013 movie among the least known but most entertaining by the great Luc Besson.

It all begins in a small town in Normandy, where a new family arrives that has moved from faraway America.

The father and mother make friends with the locals, beginning to join the film club and the local church.

After some initial problems, the son and daughter also begin to succeed among their schoolmates.

But this family harbors a dangerous secret, despite their quiet appearance and desire to integrate into the community.

Indeed, the father was a Mafia gang member who testified against his boss and now lives under an assumed name.

Because of his short temper and violent disposition, the FBI has had to move him to a new city several times.

Tired of the constant hassles he and his family cause the agency, they warn them that this is the last opportunity they have.

But of course, problems will not be long in showing themselves this time either.

The mother is increasingly impatient with the stupid hypocrisy and racism of the people there.

At school, the son quickly begins a career as a drug dealer, while the daughter brutally maligns the boys who court her.

Oddly enough, the only one who seems to find the place agreeable is the father, who was usually the first to cause trouble.

But all will cease to matter when her old mafia cronies discover their identities and where they live.

At that point, faced with the impotence of the FBI to protect them, the family will have to fend for themselves by resorting to their most brutal and murderous side.

Success is assured when you have two top-class actors like Robert De Niro and Michelle Pfeiffer directed by an action expert like Luc Besson.

Yet I note with amazement that there is little or no talk on the web about The Family, even though this movie grossed nearly $80 million in 2013.

Mind you; we are not talking in the slightest about a masterpiece before any of you get any ideas.

Still, it is damn funny, a merry-go-round of entertainment that is a parody of classic American gangsters, but this time in a European setting.

The reference is so clear and explicit that, for example, at one point, De Niro goes to a movie theater to see Goodfellas, a masterpiece in which he stars.

Even the Goodfellas director, Martin Scorsese, is behind this work by Besson in the role of executive producer.

With this premise, the American soul and the French spirit go hand in hand in this black comedy of action and criminal nastiness.

It is no coincidence if the location is precisely Normandy, where the Allies landed beginning the end of the Nazi regime.

Going back to the movie, we could call it violent group therapy for a family of criminals who cannot coexist.

The action scenes are few but full of the explosive talent of Besson, whom we all know well from the days of La Femme Nikita and Léon: The Professional.

Memories often return to those unforgettable moments of the 1990s, playing on the nostalgia of older cinephiles.

But despite the ubiquitous humor, don’t be fooled; when it’s time for violence, the story shows its muscles with awesome shootouts and fights.

So if you’re looking for pure entertainment with quotes galore, 2013’s The Family is a movie that will make you feel right at home.

Born to be criminals

As mentioned, Robert De Niro and Michelle Pfeiffer light up every scene with great irony and charisma.

De Niro is obviously in the role of the gangster he knows well, having played him many times before as GoodFellas or Casino.

To better express his funny side, he would need a sidekick, as the legendary Billy Crystal in Analyze This.

Of course, we must also recognize that movie was by Harold Ramis, a comedian amid the legendary 1980s Ghostbusters.

Luc Besson is much better at directing action, but the good old Bob delivers some great moments of humor.

Even better is Michelle Pfeiffer, who hides the ruthless criminal spirit behind a smile and friendly attitude.

To understand that, take the scene where she sets a small store on fire because of the racist owners who annoy her.

I found the beautiful actress in this role similar to Morticia, the strange and charming mother of the Addams family.

Like the Addams, we end with the two sons who do not fail to sow terror in the small Normandy town.

John D’Leo is the smart-ass who beats the brains out of the stupid school bullies with his brains, then even puts them to his service in the drug trade.

On the other hand, his sister Dianna Agron is the classic demon disguised as an angel, as beautiful and dangerous as her mother.

Among all scenes, the most hilarious is when she beats the shit out of a bunch of guys trying to take advantage of her, leaving them all broken on the ground.

In short, by now, I think you have all you need to judge whether you are interested in this picture of a dysfunctional American family on the move.

Will you ever see it?