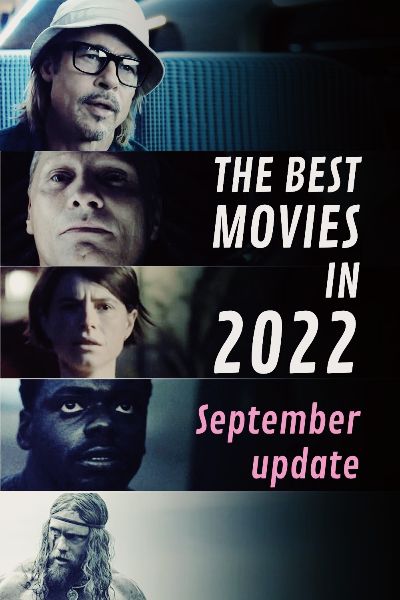 Having just entered the last quarter of 2022, we can begin to summarize the movies that have arrived in theaters this year.

As usual, needless to say, there was no shortage of sequels, remakes, and reboots of some of the famous blockbuster titles from the good old days.

Then again, why squeeze to come up with new ideas when we can recycle the old reliable second-hand from the cinematic past?

So here comes to theaters a new Batman with the face of Robert Pattinson and directed by the good Matt Reeves.

A film that honestly has no particular flaws, except for arriving too early for a saga that perhaps needed to rest a few years before starting again from scratch.

We then saw Tom Cruise again as Maverick, as if Top Gun had not already been enough to kill us with boredom with the usual American-style patriotic rhetoric.

I am, of course, talking about the big Western release, to which we might, for good measure, add useless remakes like Firestarter and even the bloated and empty Moonfall.

Roland Emmerich carries on his catastrophic blockbuster franchise with almost no ideas about how to destroy our planet.

This time the moon is to blame, becoming a weapon of mass destruction after the numerous ice ages, Maja prophecies, and aliens that punctually invade us on Independence Day.

But is it me who sees everything as unfavorable, or is there any movie that is not necessarily a tiny independent production that we can pull out of the general crap of 2022?

We’re off to a great start with the best pure entertainment movie of 2022.

The story takes place entirely on the high-speed train between Tokyo and Kyoto, where the fates of some bizarre mercenaries and assassins for hire converge.

Everything seems to be about a briefcase full of money, which some try to protect while others try to steal at any cost.

But something seems amiss in the logic of the massacre among these psychopaths.

In fact, behind the scenes is a legendary boss called The White Death, who maneuvers their every action and their very lives.

This mad gaijin was the loyal right-hand man of a powerful yakuza before betraying him and taking command of his men.

However, he, too, will have to risk his life to see his insane plan through to completion.

While Brad Pitt is in Venice these days to present the film he produced about Marilyn Monroe, the actual little gem is the one in theaters starring him.

Not surprisingly, at the helm, we have David Leitch, a former stuntman, become one of the best action directors in contemporary American cinema.

With Chad Stahelski, he had created the successful John Wick saga, then continued solo by his colleague with two more sequels and a fourth chapter now on the way.

The only criticism is that the action scenes are so good that I would have liked more of them, perhaps less fragmented by a pace that is maybe overly verbose in the desire for pulp to the extreme.

But if this were the direction for all American blockbusters in the next few years, it would be a minor flaw that I would happily forgive.

Crimes of the Future

We move from the best 2022 cheesy, funny action to a disturbing dramatic movie with sci-fi horror overtones.

In the future, perhaps nearer than we care to admit, medicine will evolve to the point where humanity no longer knows pain.

But this is not the promised paradise we all believed, as the evolutionary drive will push us to even more extreme and darker boundaries.

We closely follow the life of a chronically ill man who turns his surgeries to remove the new organs growing in his body into a performance.

His performances turn him into a star acclaimed by the crowds who worship this new trend that turns surgery into art.

But everything changes when some mutations threaten to transform the human race into a completely different species.

David Cronenberg explores the body horror genre even further, which had brought him success with films like Scanners or Videodrome since his early days.

Over time, he had repeatedly returned to the winning combination of blood, technology, and highly frightening and controversial social themes.

Not surprisingly, in other films, such as eXistenZ, the real protagonists were the so-called revolutionaries of the new flesh.

However, for the brilliant Canadian director, the theme is always that of the inevitable medical and scientific evolution that ravages the human body and mind.

Surgery has become a proper art form in which patients with major diseases and unknown organs become renowned as rock stars.

But although it may seem a heavy and challenging subject matter, the simple script successfully brings the narrative potential of Cronenbergian poetics to its fullest.

Therefore, this is a 2022 must-see movie for the director’s fans, but for others, it is an excellent approach to an author with a unique and visionary style.

The next movie is one of the more cryptic of 2022.

We have a young woman who just came out of a traumatizing relationship, which ended with the suicide of her man.

Understandably she wants to disconnect from everything she knows and therefore takes time alone.

Therefore, she rents a house in a small village that seems like a quiet place amid the beautiful English countryside.

Before long, however, he realizes that all the men in the surrounding area behave strangely.

Although they seem friendly on the surface, when he has a chance to talk to each of them, they quickly become rude and unpleasant.

To make matters worse, a strange, utterly naked individual starts following her everywhere, even all the way home.

When she realizes that no one in the village wants to help her, she will have to face a problem on her own that becomes increasingly disturbing and dangerous.

Alex Garland refines his talent, which he had already proven with two sci-fi gems like Ex Machina and Annihilation.

In this case, the director and screenwriter definitely change genres by veering into a psychological horror that even becomes metaphysical in the finale.

Personally, while dealing with different topics, it reminded me very closely of the disturbing creepiness of Mother! by fellow director Darren Aronofsky.

Indeed, the sense of shock and bewilderment we feel in this supernatural drama’s final act is indescribable.

The only way to know whether you like it is to experience it yourself, especially for those dubious about what it means to experiment with cinema.

So even I, in my small way, take a risk in recommending it, aware that even now, a good half of the audience considers it awkwardly ridiculous.

After Alex Garland, we move on to another auteur from a numerically limited but cinematically inspired filmography.

Indeed, Jordan Peele has managed to make his way among countless colleagues despite having made only two films, Us and Get Out.

Two films that humorously range between science fiction and psychological horror in an entertaining mockery of the racism still alive in American society.

This time the New York director takes on the theme of an extraterrestrial invasion, setting it on a small California ranch.

Strange events happen over the heads of a horse breeder from a long-established company that has always worked on movie sets.

After a long period of glory, the family falls apart when the father dies during a freak accident.

But the accident did not happen by accident, for in the clouds above the ranch lurks an unnameable danger.

With his sister and a technician from the nearby supermarket, the cowboy will try to film evidence of UFOs to become famous and save his horses.

On the web, I have read a vast majority of opinions mercilessly crushing this film, which I, on the other hand, found perfectly in line with Peele’s style.

The basic idea is very original, albeit in the overused context of the alien genre; so are the direction and dialogue.

Perhaps the horror parts could have been bloodier and nastier, but the omnipresent tension is just proper and never wanes until the last minute.

Apt is the choice of Daniel Kaluuya as the lead actor, this time in a more introverted and quiet role than in Get Out.

In short, Peele adds another essential 2022 brick to the movie collection he is nurturing so passionately.

He does so, perhaps antagonizing some fans, but bravely staying true to his idea of cinema.

Finally, we conclude with one of the best directors to come out in the last ten years, once again with only three films to his credit.

After the splendid horror The Witch and the hallucinating drama The Lighthouse, Robert Eggers revisits Hamlet in a Norse mythological sauce.

That being said, the plot unfolding is somewhat predictable; we will see little Amleth helplessly witnessing the murder of his father.

The murderer is his cruel uncle, who mistakenly believes he, too, is dead, forcing him to flee after usurping the kingdom.

The child has grown into Alexander Skarsgård‘s overfilled body of Viking muscle and rage many years later.

By now, he is a fearless warrior who is part of a fierce band of raiders, but the woodworm of revenge is still firmly planted in his mind.

Therefore, when the opportunity presents itself, he mingles with a group of prisoners sold as enslaved people to his hated regicide uncle.

But even before he sees the blood flow that he longs for, Amleth falls in love with another young slave girl with whom he might have a different fate.

As I said, it is not in the plot that we should look for the originality of this film.

But instead, it is admirable the top class with which Eggers directs and stages.

His first two works shocked me much more deeply, yet The Northman is an incredible spectacle.

Especially if you can admire it at the cinema, this is a blockbuster worth every penny of the ticket.

The tremendous Icelandic moors become a drama-fantasy spectacle of love, resentment, and struggle for honor and survival.

And in the end, life and death find the space to coexist in a final breathtaking fight in the heart of a volcano’s flames.