Dangerous – A Lonely Hero Without Heart And Compassion 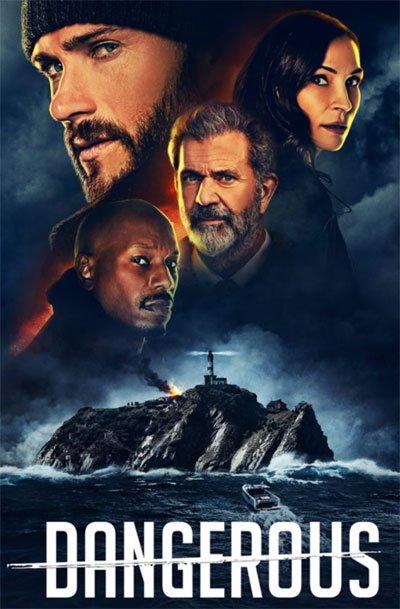 Today we are talking about Dangerous, a very peculiar action 2021 movie with a hero who is an absolute incurable sociopath.

Besides being unable to feel any kind of feelings toward anyone, he has a violent killer past in the army.

However, despite his talent for murder, his dangerous indiscipline had ended his military career.

After a long stint with a gang of dangerous international criminals, he ended up in jail for a long sentence.

After serving time in prison, this man is now free. Although, of course, he must necessarily undergo psychological and medical treatment.

His analyst suggests that he reconnect with the family he has not seen for many years.

But they want nothing more to do with him because of all the trouble he had in his childhood.

However, the opportunity presents itself nevertheless since his younger brother dies in an accident.

At this point, he must return to the small island where the funeral will occur with his friends and a few relatives.

His brother had purchased the island with a significant investment. Since then, he has used it for historical research on the book he was writing.

When he arrives, his mother greets him by asking him to leave, and the local sheriff arrests him under an FBI warrant.

But unfortunately, he will not be the only one to return to the island at that very moment.

The gang accomplices were in business with his brother, and I want the money they lent him back.

Despite having everyone at everything against him, this unbeatable psychopath will become the hero of all the islanders for a day.

Are violence and murder a disease or a choice?

Dangerous is certainly not a perfect movie, yet the basic idea makes it one of the most exciting thrillers/action of 2021.

What drives the plot is far more original than the plot itself. Indeed, the story is the usual criminal treasure hunt that works much better in movies like Trespass.

The main character is so detached from reality that he is always funny, even in the most violent situations.

Scott Eastwood, son of the famous movie legend Clint Eastwood, is solid and menacing but at the same time naive as a child.

Even better is Mel Gibson as his psychiatrist, with whom he is in hilarious contact throughout the story.

Old Mel is a guarantee of excellent performance. Although, in this case, he almost seems to work within quarantine distance from the rest of the cast.

Instead, if we speak about the movie’s weak points, I think it totally wastes Famke Janssen and Tyrese Gibson in their roles.

Mind you, this is not the fault of these actors, who are excellent and charismatic for what their small parts allow them to be.

I do not quite understand the purpose of having two strong characters like these in the script.

What is the point of describing them so well to use them badly? Having them die immediately or join the group a few minutes before the end makes no sense.

It’s a shame because the group of attackers on the island would have benefited from some less anonymous characters.

Let’s face it, in the end, the purpose of these criminals is just to be fodder for the psychopathic hero.

Although I have read many negative reviews, Dangerous adds its share of originality to a crowded movie genre.

So-so direction and yet it works

David Hackl is a director who has never fully convinced me, and I admit that he does not succeed even with this movie.

Although, as I have said, I consider Dangerous of 2021 an enjoyable movie, the direction is a weakest spot.

Indeed, some scenes have lovely tension slowly rising, like the terrific beginning with just the right mood.

The action part has some horror moments that work perfectly together, yet at the final climax, everything gets lost in too much fast editing.

I must say, however, that the trapped and powerful feeling of the main character is what enhances everything else.

The actors I mentioned earlier hold the show together, even before the script.

Quite a style of writing outlines of lights and shadows, exceptionally well a few ambiguous and exciting characters.

The plot of the gold hunt may fragment into a fast-paced way, but it is still the ideal terrain for combatting these mercenaries.

However, unfortunately, likewise, the screenplay incomprehensibly cuts away from other characters, wasting the potential of some excellent actors.

I understand that I may seem a bit contradictory, making you think: but is this movie worth it or not?

I would say it is worth it, for everyone, at least to try it. Indeed, the construction of the action is quite classic, focusing on an exaggerated but ultimately also human and believable protagonist.

This narrative combines these two aspects of the badass warrior who is also mentally stuck and emotionless.

So if you want to enjoy this cross between Rain Man and Rambo, at least I can say I warned you. Not everything works perfectly, but where it does, you will have a show that deserves our attention.

A Quiet Place – Never Be Scary Of Breach The Silence