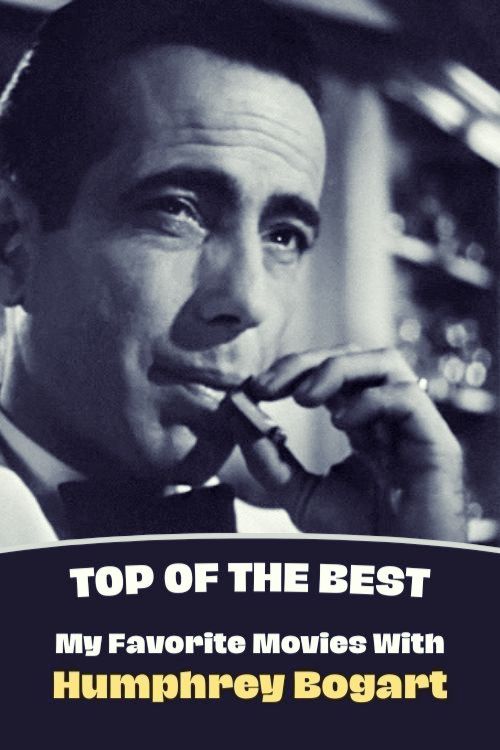 Although many still know his name today as one of the best actors, how many of the younger generation are familiar with Humphrey Bogart movies?

In those days, many actors avoided characters with complicated inner conflicts. Indeed, they all preferred to have brighter and more optimistic roles, except for dear old Bogie.

On-screen, his shrewd and friendly face always shone with unquenchable radiance, with a natural and charismatic acting style.

For critics and fans, Bogart’s performances were always authentic rather than rehearsed or prepared.

Indeed, this trait of his acting was the secret behind his success, besides being why some people called him the actors’ actor.

He would have to endure a long apprenticeship, playing roles rejected by the eccentric stars of the time. However, the 1940s reward his patience, and he quickly becomes a film industry icon.

Let’s start right then by going over four movies that, in my humble opinion, are the best of Humphrey Bogart‘s career.

The legendary private detective Sam Spade receives in his office a beautiful stranger in search of her missing sister.

The woman points them to a dangerous criminal, and Spade’s partner, infatuated with her, decides to investigate in person.

Unfortunately, everything goes wrong, and someone shoots him in the chest, leaving his corpse in a ditch.

The police immediately suspect Spade, who has no alibi and has been having a secret affair with his partner’s wife for some time.

The detective eventually decides to investigate on his own to get off the list of suspects. Thus, he soon realizes that the plot has nothing to do with his client’s sister.

In a game of slaughter in which everyone tries to cheat and frame everyone, Sam Spade must resort to all his cunning to emerge as the winner.

Humphrey Bogart enters myth by storm, bringing to life the protagonist of one of the best hardboiled novels ever.

Spade is the quintessential prototype of the charming and cunning detective, up against all men and desired by every woman.

Directing, John Huston redefines the role of the hero by portraying a lonely, lying man who takes every situation to his advantage.

The pace flows smoothly through a series of memorable sequences and dialogue. Everything works like a ticking time bomb by revealing the plot one piece at a time.

In conclusion, we are simply talking about a must-see movie in the collection of anyone who wants to be a true cinephile.

Moving from one legend to another, we now move to the warm desert moors of Morocco, to Casablanca.

We are in the days when the Nazi threat was advancing unstoppably and fearfully into the heart of all Europe.

Back then, the African city was the destination of all who wished to expatriate to the United States.

You can easily imagine that Rick was none other than our dear Bogie, impeccable and impassive in his elegant white suit.

The man is a petty criminal who fled Paris after the Nazi occupation and lives in the dirty business in his establishment.

However, one day his heart beats again, too, when a woman he thought lost reappears seeking his help.

Casablanca is simply perfection becoming film. The story delivers the best actors of the time, among whom, of course, is Humphrey Bogart.

Rick’s character is only seemingly an indifferent cynic, friend to all and enemy to none. In truth, he is just a romantic villain whom the wonderful Ingrid Bergman has hurt in the past.

Upon her return, Rick initially reacts irritably and rudely, refusing to help her and her companion leave Morocco.

But her kind eyes and the melody of the legendary As Time Goes By will revive the old forgotten love and his spirit of fighting for the resistance.

Casablanca is one of my absolute favorite best movies, not only among those with Humphrey Bogart.

The years pass, and film genres change and evolve. But I will always desire to return to that magical world, suspended in the stuff that dreams are made of.

After one of the world’s most famous melodramas, we turn to one of the best comedies of all time.

This time Humphrey Bogart plays the eldest son of the Larrabee family, the wealthiest family in New York.

The man is his parents’ pride, successfully running the many profitable businesses and companies bearing their name.

Unfortunately, his younger brother is not as bright, at least when doing business.

Speaking instead of women and fun, this unrepentant party boy is perpetually on the lookout for a former Mrs. Larrabee.

After three miserably failed marriages, however, the family finally approves of what could be a fourth wife.

Indeed, the girl is the daughter of another wealthy family that could lead to a lucrative corporate merger.

But their chauffeur’s miserable daughter, Sabrina, returns from Paris transformed into a beautiful woman, threatening to scupper the big deal.

Billy Wilder signs one of the best comedies in film history, with fantastic characters full of brilliant one-liners.

Comedy and romance come together in an excellent flavor with a classic yet still thoroughly modern.

As with the earlier movies, black and white endure in time as an immortal masterpiece that spans every generation.

Unforgettable is the then little more than 20-year-old Audrey Hepburn, whose beauty and elegance dazzle every frame.

The actress plays with irony and a veil of sadness, the ugly duckling in love, who later becomes a magnificent swan adored by all.

To save her brother William Holden from another failing marriage, the mature Humphrey Bogart must woo her instead.

Sabrina is the typical movie that I would recommend to anyone, adult or child, to watch alone or with friends.

So if you are guilty of the mortal sin of never having seen it, redeem yourself at once and run out to retrieve it.

Finally, we come to a movie very different from the others, where Humphrey Bogart plays the villain this time.

Indeed, old Bogie is in charge of a trio of dangerous escapees who take refuge in the home of an ordinary middle-class family.

The plan is to wait until midnight when one of their accomplices brings them to escape money.

Since he has a wife, a teenage daughter, and a young boy, the householder quickly realizes that it is better not to play tricks.

But disagreements immediately begin in the house not only with the hostages but also among the group of escapees.

One is a dangerous behemoth with little brains and too much muscle, while the other is the leader’s younger, naive brother.

In addition, Bogart not only wants to get the money but also wants revenge on the policeman who publicly humiliated him during his arrest.

The situation becomes increasingly tense. The family’s father becomes a surrogate for his enemy policeman until the inevitable final confrontation.

Humphrey Bogart rips off his usual mask of elegance and fun, stepping into the role of a rough, tough-mannered lifer.

Sadly, The Desperate Hours is one of the great actors’ last movies, already debilitated by the beginnings of throat cancer.

Their struggle reflects the inner conflict of an entire nation. One soul is torn between poor proletarians and rich, fat middle-class people with huge mansions.

This wearisome game of massacre sustains a script that defies the rules of probability while remaining compelling to the end.

In the 1990s, Michael Cimino directed a remake of the same name with Mickey Rourke inheriting the role of old Bogie, but while good, I will always recommend the original movie.

Dangerous – A Lonely Hero Without Heart And Compassion

A Wounded Fawn – The Astonishing...