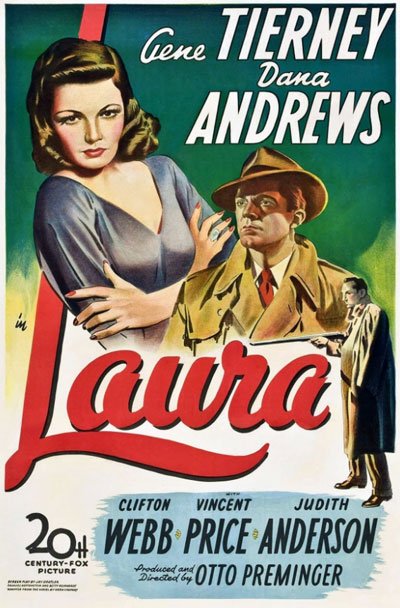 Today I want to recommend one of my favorite movies by the great Otto Preminger, Laura, 1944 classic that is a staple of the noir genre.

According to one of the rules of this genre, the story begins with a murder.

The victim is one of the most beautiful, wealthy, and respected women in town, Laura Hunt.

Being so beautiful and famous, she had many admirers, suitors, and enemies envious of her success.

Indeed, the police inspector investigating the case realizes that that will be a problematic skein to unravel to unearth the killer.

A well-known journalist, the woman’s best friend and mentor, follows him everywhere, helping him interview witnesses.

He is not off the suspect list, although he has helped her climb the ladder in publicity work and the local aristocracy.

But over the years, the man has also sabotaged many romantic relationships, jealous of the woman he considered his creation.

Equally suspicious is the husband, or almost-husband, since the victim died a few days before the wedding.

The marriage would have given him half her immense wealth, but his affair with a young model could have blown it all.

Each of them lies and accuses the others. They all try to turn the investigation away from themselves and cover up every possible clue.

At the same time, the inspector develops a morbid obsession with every detail of Laura Hunt’s intimate life.

His love for a ghost makes him grill suspects even more heavily, often stopping by the victim’s home after work.

Until one such evening, when the man sits alone in the large empty house, the whole story has an incredible twist.

The legend of cinema at its peak

From 1944 to the present, Laura is one of those rare occurrences in movies where everything is perfect and untouchable.

However, holding the rights to the original book, the stubborn and brilliant Austrian director eventually prevailed.

The production could not do without this excellent noir story. A novel that is so simple yet capable of surprising scene after scene like few others.

There was no shortage of film noir in those years, such as the splendid Double Indemnity or The Woman in the Window.

So did he impose the great Joseph LaShelle as director of photography, a choice that was as successful as ever.

The cruel and mysterious atmosphere is enhanced in this magnificent black and white. Indeed, it is so beautiful that it won the Oscar for best cinematography that year.

Notice how the cinematography handles the right proportions of the light and shadow on each character’s face.

It is a choice that is not accidental, emphasizing their ambiguity as part of the story and as an average sampler of upper-class Los Angeles.

The incredible elegance of the environments of these houses contrasts, instead, with the mediocre human misery of these characters.

Yet the brisk pace and brilliant dialogue keep the narrative from becoming too morbid and dull.

Finally, all this immerses us into David Raksin‘s evocative music that accompanies us from room to room and situation to situation.

A movie melody that was as good in 1944 as today, especially with the song Laura written by Johnny Mercer.

A talent competition between immortal actors

Gene Tierney is a leading lady who conquers the screen in every scene, albeit with a demure and not explicitly sexualized beauty.

She takes on men with pride rather than just appearances, claiming her intelligence and independence as a rich successful woman.

Around her revolves the rest of the cast, beginning with Dana Andrews as the cunning cop with unorthodox methods.

However, even he is not immune to the protagonist’s charms, falling in love with her as he delves into her past to find out who killed her.

At that point, he becomes addicted to her magnificence and often stands in front of her painting. Her image, indeed, haunts him night and day.

On the other hand, Vincent Price plays her fiancé. A man softened by his wealthy life and unrepentant womanizer.

The actor gives a light and funny performance, still in the stage of his career before his rise as a star in countless horror films.

Finally, the best and most ambiguous role in the whole story is Clifton Webb. A journalist who is sharp and biting, besides always ready to harshly criticize anyone.

Although he was known only for his stage performances, Preminger strongly wanted the actor by imposing his name on far more famous stars.

Out of this dispute between the director and the production was born an atypical and unforgettable noir character.

Mainly, the story is far from the usual rainy settings of the noir genre. Webb’s insane flair is the pinnacle of a perfect movie in this setting.

A movie that would soon become a cult, inspiring countless other screenwriters and directors.

Above all, we can name David Lynch, who not surprisingly paid homage by naming Laura the protagonist of the famous TV series Twin Peaks.