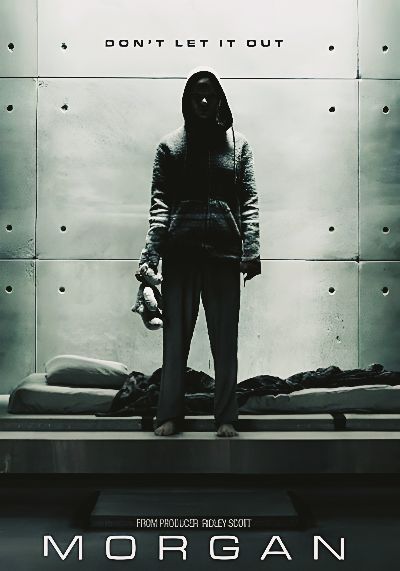 Morgan is a 2016 movie that raises interesting questions about what distinguishes our consciousness from that of an artificial being.

Indeed, in this story, we have a powerful corporation that has been experimenting for years to create the perfect humanoid soldier.

This rigorous process advances by developing a series of prototypes in an isolated laboratory in a forest.

The team of scientists may have reached the end, growing the fifth and final generation of human/mechanical hybrids.

But the young girl/soldier they have created has an unexpected reaction, seriously injuring a staff member.

Therefore, the corporation’s management sends their best agent to the site to verify the actual status of the experiment.

If this woman finds any security threat, she will be free to shut down the facility and personally kill the prototype.

After some interviews, she cannot make up her mind as the answers she gets are too vague and ambiguous.

Although this fifth-generation model seems athletically strong, psychologically, she does not seem predisposed to obey orders.

The scientists, however, defend the humanoid girl, claiming that the incident was just an emotional reaction justified by the circumstances.

The agent believes that the lab staff are overly emotionally attached to their creature and therefore are not objective.

At that point, he decides to bring in a specialist from outside, who will have to judge whether the prototype is reliable.

However, the corporation underestimates the scientists’ love for this artificial life and its determination to survive at any cost.

Very soon, therefore, a no-holds-barred struggle begins in the distant forest for the freedom they have denied her since birth.

Would we see more from this talented director?

Morgan remains, for now, Luke Scott‘s only movie, which has unfortunately not returned to theaters since 2016.

The son of the far more famous Ridley Scott follows his father’s lesson to the hilt, both in style and substance.

It is impossible not to liken this android to those in Blade Runner, given the similar look and the same quest for independence and freedom.

At just under $10 million, this promising young director puts out a small but compelling sci-fi epic.

One of the winning aspects of this story is not taking sides. Indeed, each character appears with weaknesses and obsessions that make us somehow dislike them all.

Being free to cheer for one or the other, I believe we are also freer to enjoy the narrative unfold as essential but solidly effective.

The special effects, costumes, and set design are of a high standard, which is a sign of a collaboration with the usual professionals of Ridley’s father.

However, the son also stands out with a technique and editing with an entirely different personal touch.

For example, everything begins by presenting a situation already in place instead of following its development from the beginning.

Alternatively, at times the dialogues seem to be about anything but what is the essence of the theme, namely artificial versus human life.

But coming to the few (but excellent) plot twists, we understand what those disconnected words meant.

So do we understand the attitudes of some of the characters, who are initially closed and inextricable.

By putting the lives and deaths as a line of a profit-and-loss balance sheet, they are sadly the most believable part of this kind of science fiction.

Is the future female?

Morgan of 2016 is a movie with a predominantly female prominence in the central characters.

This is not to say we must trash the male cast; for example, we have the usual Paul Giamatti in a short but remarkable sequence.

We certainly better appreciate the talent of Anya Taylor-Joy. The actress was already coming off the success of The Witch back in the day.

Besides being a human/android hybrid, her character is also a moral hybrid of naive goodness and cruel ruthlessness.

Her main antagonist is, of course, Kate Mara, a cold and determined enforcer hand of the faceless corporation.

A woman who is almost femininity deprived with her obtusely aggressive behavior and masculine appearance in her clothes and bearing.

Of course, we will also eventually understand her motivations, which I do not want to spoil unnecessarily in advance.

The juxtaposition of this woman and the android girl is the story’s core, around which all the other characters revolve.

We could sum up this duel in the genuine (initially) will survive against the cold business calculus of a corporation.

Next, we can add the two beautiful scientists, Rose Leslie and Jennifer Jason Leigh.

Struggling between their professionalism and their love for the girl they created, they will eventually have to choose a side.

We then conclude by mentioning the always stunning and talented Michelle Yeoh, the mother who gives birth to the android.

But no sin remains without punishment, as all the characters, bar none, will learn.

Morgan is a movie with many more ideas than meets the eye; technically fascinating and the debut of a director I hope will return, sooner or later.