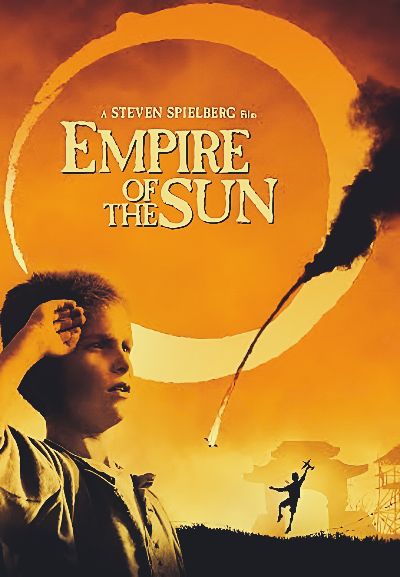 The Japanese invasion of China in 1941 seems remote and forgotten, but Empire of the sun is a 1987 movie with which we will experience it as if it had happened today.

It all begins a few years before the war. A wealthy English family lives in the luxury of Shanghai’s affluent neighborhoods.

Nothing seems to threaten their lifestyle, secure in the considerable revenues from the head of the family’s textile factory.

However, the sound of the Japanese threat becomes closer every day, even though everyone tries to ignore it.

So they continue to raise their boy as if nothing is wrong, going to private school and then to church as usual.

But suddenly, the army invades China by marching through the streets. Thus, they have to flee immediately without taking anything with them.

Unfortunately, amid the fear and confusion of a city under siege, they also leave their son behind.

The little boy, frightened and hungry, finds a pack of vagrants who steal everything they can in the general mess.

Trying to make himself useful, he takes them to his former wealthy abandoned neighborhood to raid the houses.

Yet the army catches and arrests them in the act. After that, they imprison them in a concentration camp full of British and American prisoners.

The conditions there are harsh since they all live in a small space, with little to eat in the filth and general degradation.

However, despite the guards’ brutality, they succeed in forming a small group of prisoners who try to endure by expedient means.

When the war’s end seems near, everyone fears the Japanese will murder them to cover up whatever has happened.

The cruelty of war against children’s innocence

Sometimes I am amazed at how few people today talk about this 1987 movie, Empire of the Sun.

Indeed, it is not only a milestone in the filmography of the great Steven Spielberg. Above all, it is the debut of a great actor like Christian Bale.

Of course, perhaps if he had donned the Batman cape from the start, he would have come to success much earlier.

But fortunately, true cinema often goes beyond the commercial logic of the general public.

Placing the camera at a child’s height, Spielberg tells us about the war and the Japanese army’s occupation of China in the 1940s.

Thus this child begins the story as the privileged son of a wealthy family. Everything changes, however, upon remaining alone to fight against the worst of wartime horrors.

The horror is seeing the spark of youth’s innocence swinging in the dark, which finally extinguishes with young Bale’s last song.

His hope is until the last moment, desperately, to see his parents again.

The last scene of the reunion with his family has none of the classic happy endings. A trap Spielberg falls into too often, but not this time.

Far from it, the ending of Empire of the Sun is a soul-wrenching moment, making this 1987 movie a masterpiece and absolute cult.

It is disheartening that no one considered it for an Oscar, despite its many nominations.

The box-office results were even more disappointing, far from the stratospheric takings of the director’s other films.

Indeed, among the many coming-of-age stories, this is one of the coldest and cruelest adventures dripping with warm humanity.

Perhaps some situations are not believable, I do not want to deny that. Still, the pacifist message of the story is clear, and the spectacle of the highest level is guaranteed.

Direction and acting talent of the cinema’s coming-of-age

Steven Spielberg‘s direction is spectacular as usual, yet without extremes, while always staying close to his characters.

The most visually striking scenes are those of the invasion of Shanghai, with thousands of extras among civilians and soldiers.

Amid the chaos, the camera moves sinuously with the virtuosity of a veteran director confident in his abilities.

Christian Bale shows a glimpse of what will be his incredible talent, capturing the general empathy always present in every scene.

A short time ago, I talked about 1987’s Empire of The Sun in a series of movies about this great actor, who is one of the best of his generation.

John Malkovich is even better in his role. This thief philosopher is ambiguous, and a liar, but nevertheless has a sense of dignity and honor.

Not surprisingly, he becomes the leader inside the concentration camp and is a putative father to the child after he loses his parents.

Equally touching is Miranda Richardson‘s performance. Indeed, the young boy will take care of this woman, enduring to the end.

Spielberg shoots the dramatic death with respect as if that moment also marked the end of hope for the protagonist.

Finally, we mention the small role of Ben Stiller, another young prisoner who will befriend little Bale.

Within a few years, he would make his directorial debut with the intriguing Reality Bites and the promising talents of Winona Ryder and Ethan Hawke.

In sum, this movie is a historical epic that was also a hotbed of future actors and confirmed Spielberg’s cinematic mastery.

Over the years, many have reevaluated it as a masterpiece, while others consider it a misstep by Spielberg.

What do you think, is it a bad or good or merely an ordinary movie?