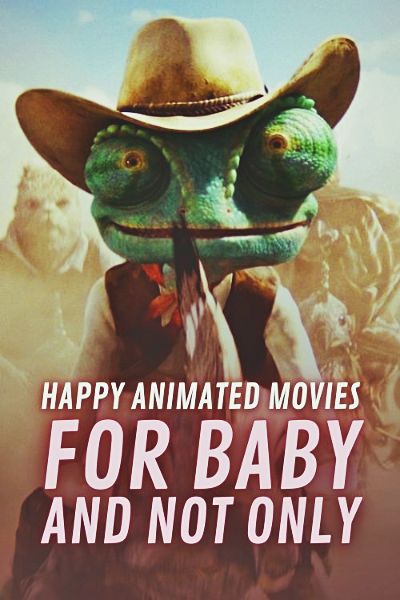 While this long, hot summer is ending, let’s enjoy every precious moment to make kids happy before school starts.

What is the easiest way to make them smile than with a fun animated movie?

However, don’t be fooled by the seemingly naive simplicity of these cartoons. They actually hide a clever story that will interest adults, making them become children again.

Isn’t this the purpose of the fairy tales our mothers or grandmothers used to tell us, besides, of course, to put us to sleep?

Now, however, let us try to stay wide awake as we watch together a series of cartoons perfect for children’s delight.

We begin our animation catalog by following the life of a tiny, insignificant ant.

Every day the poor creature repeats the same interminable routine. An endless cycle of always being in the excavation of a massive work of his colony.

Yet he seems to be the only one among all the workers constantly complaining about that unsatisfying life.

He cannot know that the queen’s daughter is equally dissatisfied. An arranged marriage blocks her from birth with the dull-minded general of the ant army.

He, therefore, wishes to escape the obligations of his rank. So, one evening she goes down to celebrate with the workers at the end of their shift.

On that occasion, the princess and the miserable Ant Z fall in love, only to escape daringly after a tough battle with termites.

The odd couple must choose to seek their paradise outside or stop the mad general from carrying out a massacre.

Antz is DreamWorks Animation‘s first success, with a classy production that was a big hit worldwide.

The story is a fun metaphor for working-class struggle, as simple for children to understand as it is fun for adults to watch.

Thus the naive but wholesome ignorance of the workers and soldiers contrasts with the icy determination of the rough General.

The military leader’s delusion of omnipotence is no accident. For example, just listen to his speeches on the alleged inferiority of the working race.

Above all, there are excellent jokes and hilarious situations between Woody Allen and Sharon Stone.

In the end, the moral is simple: it doesn’t count to be as small as an ant if your dreams are as big as a mountain.

As a second tip to make your kids happy, we are talking about a movie that is half animation and live-action.

In part with live actors, we follow the always hilarious Bill Murray going through a difficult time with his daughter Elena Franklin.

The little girl loves her father even though he constantly embarrasses her by filthily neglecting his personal and food hygiene.

For this reason, the man contracts a deadly virus by eating food picked up from the ground at the zoo where he works.

Here, in the animation part, we see the inside of this man’s body as a city with a crazy population.

Osmosis Jones is a white blood cell in charge of security like the police and the only one who notices the symptoms of this disease.

His superiors do not listen to him, being busy with the political elections for the new mayor in charge of the brain.

Outside his body, the man increasingly detaches from his daughter to go to a silly fair with his brother.

The virus, meanwhile, tries to kill him as quickly as possible. Therefore, Jones and a colleague from a sore throat pill are the only ones trying to save his life.

Osmosis Jones is a two-sided movie about which I have two different opinions.

The animation part is happy and, at times, almost brilliant, both for kids and adults.

In contrast, the moments with the actors are pretty boring, totally wasting the monstrous talent of a comedian like Bill Murray.

However, it is one of the few educational and entertaining cartoons, so it is definitely one to add to any parent’s collection.

From the human body of a zookeeper, we now move to the vast highways in the desert heading toward Los Angeles.

In one of the traveling cars is a cage containing a tiny chameleon. The poor animal, by accident, is thrown out onto the hot asphalt.

Wandering alone in the desert, he finds a small animal town experiencing a crisis due to a lack of water.

Inadvertently, everyone mistakes him for a formidable gunslinger, thus entrusting him with the role of sheriff.

Against him, however, stand the corrupt mayor and a gang of criminals, led by a dangerous rattlesnake.

Conspiring to become the sole master in the area, the miscreants humiliate the chameleon by driving him out of town.

Alone again, the animal will have to travel into the nothingness of that wasteland. However, the experience will perhaps serve to find the courage to face the enemy.

Rango is a small animated masterpiece that will make western movie fanatics and the most inexperienced movie kids happy.

Gore Verbinski signs another worldwide blockbuster a few years after the immense success of the Pirates of the Caribbean saga.

From those movies, the director brings the exuberant Johnny Depp, who voices this fantastic chameleon gunslinger.

Of course, there are endless quotes from Sergio Leone‘s and John Ford‘s westerns and other classics. Or, not necessarily from the same genre, he quotes Don Siegel‘s, Inspector Callahan.

Clint Eastwood also could not miss playing the mysterious spirit of the west, dressed in the legendary poncho from the Dollars Trilogy.

Rango is a perfect movie to make your kids happy while initiating them into a genre they may love as adults.

This time the pet protagonist of this happy story for Kids is a snail who paradoxically has dreams of glory as a high-speed racer.

Of course, his community mocks him for this unachievable wish, yet he still believes in it irreducibly.

One night he accidentally falls in the middle of the highway living in the gas tank of a souped-up car.

After he miraculously manages to save himself, he discovers that he has become able to run like the wind.

Unfortunately, his new condition does not like slug arrest, who chases him away along with his clumsy brother.

Wandering around town, he ends up in the garage of two Mexican burrito vendors, who run a secret little pet racing ring.

The Slug effortlessly routs the opponents, who become his friends, but that is not enough.

Indeed he desires to race against humans in actual competition with racing cars.

Turbo is definitely not an original film or one that has anything to differentiate it from other DreamWorks productions.

However, the recipe works flawlessly, mainly thanks to the voice of the likable protagonist Ryan Reynolds.

The actor who hides behind the mask of the famous Deadpool convinces in the part of the stubborn self-effacing snail.

Even more convincing is Paul Giamatti voicing the somewhat wimpy brother who nevertheless follows him everywhere without giving up.

Of course, we need to grant much imagination to believe about snail races in Indianapolis.

But in the end, I would say that just the happy absurdity of the situation and as close as we can find to the absurd dreams kids have.

So let’s not be party poopers and just enjoy the show because there is laughter for everyone anyway.

Finally, we conclude with a nice oriental-style action fantasy, where there is no lack of childlike sympathy and naiveté.

The protagonist of this adventure is the princess of a kingdom threatened by some evil spirits capable of turning people to stone.

Centuries earlier, these spirits had almost destroyed the kingdom. However, they failed because of the sacrifice of human-friendly dragons.

Before they too became stone, these dragons had channeled their power within a magical gem.

Even though this gift’s purpose is to protect the human race, It was the appointment that became the cause of division among all the clans.

While the city celebrated and happy kids ran through the streets, rival leaders betrayed trust and stole the Gem.

Once grown up, the warrior princess will once again seek the Gem. Except the stone is broken, and she must reassemble it to save the kingdom from the threat that has returned.

She will be joined by strange characters she picks up along the way. Among them, finally, is also the only remaining dragon from the massacre of centuries earlier.

What works about Raya and the Last Dragon is perhaps not the dragon fable but the way humans fight each other, blinded by power.

I am doubly glad that voicing the lead in this blockbuster is Kelly Marie Tran.

I remember that Star Wars fans had stupidly slaughtered the talented actress. All this, you think, just because she was deemed not beautiful enough for the role in The Last Jedi.

Equally good at voicing her young enemy is Gemma Chan, with whom she has a relationship of hatred and friendship from kids to the inevitable happy ending.

So let’s enjoy together this very Hollywood entertainment, but with a distinctly Eastern heart and soul.