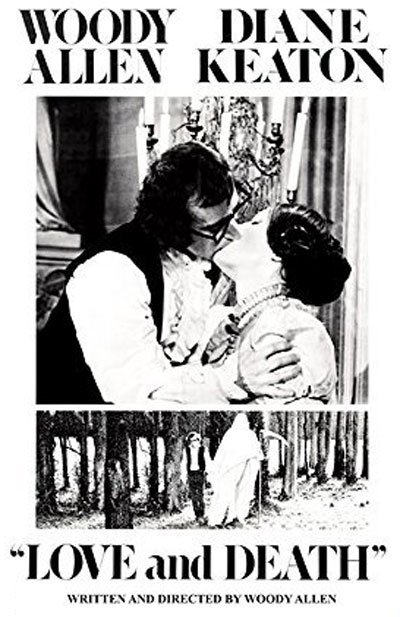 Today we talk about Love And Death, a movie from 1975 among my favorite comedies by one of my favorite directors, the great little Woody Allen.

Indeed, this insane melodrama leads directly back to the themes most dear to this longest-lived figure in the film industry.

It all begins in the 1800s, at the gates of a historical moment of war and death in Russia.

Allen is the youngest of three brothers in a family very proud of the nation who would like a future as a soldier for him.

But with his petite physique and intellectual spirit, he feels closer to his romantic and beautiful cousin.

However, the girl is already in love with her older brother and openly declares that she wants to marry him. But being unexpectedly rejected, she sadly ends up with a rich, old and boring man.

Just then, Napoleon’s armies invade Austria, and all the youth of Russia must join the war.

Allen also leaves for the front and becomes a decorated hero by sheer luck despite being completely unable to fight.

He thus returns to his homeland, where his fellow citizens applaud and admire him, having some beautiful mistresses.

Moreover, again by luck, he manages to marry his longed-for cousin, who initially does not return his love.

To comfort him, she promised to marry him if he survived a mortal duel, which they did not believe was possible.

Over the years, however, the couple begins to be happy, except that war reaches them, and the French conquer their country.

The unfortunate couple then set off on a journey with the mad intention of assassinating Napoleon.

The objectivity of subjectivity

Love and Death is a delightful comedy of the absurd, a 1975 masterpiece movie with surreal situations, unforgettable dialogue, and bickering.

Woody Allen ingeniously combines the war tragedy with the love madness, sprinkling everything with his edgy humor.

As usual, he widens the theme to embrace the entire existence of humankind, always looking for a reason to fight.

Not surprisingly, notice how his character risks his life more when he returns home rather than on the battlefield.

With a comic madness worthy of the best Marx Brothers, Allen alternates his remarkable slapstick mimicry with brilliant, over-the-top dialogue.

Of course, the plot by no means claims to be believable, yet the staging and costumes are worthy of the best historical films.

Therefore we have philosophy and theology raining down on the background of the war. Napoleon’s painful advance along Russia’s vast lands will bring the conqueror to the beginning of ruin.

Consistent with the story period, death is a physical presence that visits the leading character periodically.

It is no coincidence that, according to Woody Allen, the only sure things in life are sex and death. Things that, we can safely say, are the overarching themes of this film.

Moreover, the barrage of words is so fast and dense that very often, it is possible to miss lines, only to notice them on a second or third viewing.

Hence, Love and Death is a movie I will forever love and never die, improving like wine as it ages from 1975 to the present.

The end of the beginning of a cinema grandmaster

As mentioned, Love and Death is one of Woody Allen‘s best movies, condensing his talents as a director, writer, and comedian in this 1975 masterpiece.

It concludes what we might call his artistic training journey, ending the most overtly comic part of his filmography.

I believe he is not yet a complete artist but a great auteur enjoying himself as a brilliant and promising child.

His character is wonderfully clever and stupid, brave and cowardly, repellent to women, and an irresistible heartthrob.

Like Charlie Chaplin‘s unforgettable dictator, he jokes about men’s nonsense of society, sparing no jabs and jokes toward anyone.

Allen dances amiably through myriad crazy and unpredictable situations, from which he always emerges as the victor.

Just as, in my opinion, he emerges victorious from death in the finale, if you’ll excuse the spoiler. Indeed, he bids farewell with a brilliant and melancholy existential monologue to his beloved Diane Keaton.

The actress was in her heyday. Young, beautiful, and headstrong, she perfectly combines intelligence and sensuality with irony and elegance.

Her character is the perfect mirror of Allen, creating a series of irresistible verbal exchanges with pacifist and warmongering existentialism.

While these dialogues are seemingly committed to a philosophy of deep complexity, the comedy makes them direct and accessible to anyone.

Essentially the essence of this philosophy is that there is no love nor art without suffering.

But, optimistically, likewise, there is no suffering that is not then somehow followed by a form of happiness.

Love and Death is a must-see once-in-a-lifetime film that wisely makes one think and reflect on terrible human tragedies with a smile.

Batman Begins but not only –...