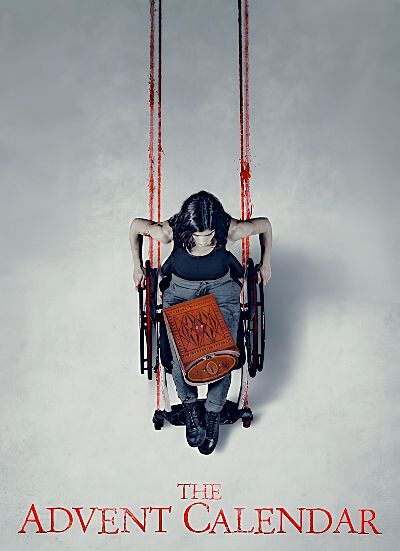 Christmas should be a time of peace and serenity with friends and family, but this is not true for The Advent Calendar, an excellent horror movie from 2021.

We must say that the protagonist’s life is not comfortable from the beginning, as she is a quadriplegic living alone in her wheelchair.

Moreover, her family is not among the most fortunate either. Indeed her father has not spoken for years due to Alzheimer’s, and her stepmother is a heartless and cruel landlady.

The situation at work is no better either. Her boss considers her a burden to maintain, and the arrival of a charming colleague further complicates her predicament.

Everything changes when a friend of hers gives her an advent calendar just before the holidays.

According to the convention, the week before Christmas, she should daily eat candy in it to respect the tradition.

Soon she realizes that eating these treats each time seems to make her wish come true.

Therefore, she finally talks to her father for the first time in many years, eventually finding a boy to whom she is romantically attracted.

However, in this world, sadly, you never get anything for anything. Indeed each wish matches the brutal death of someone close to her.

Approaching Christmas night, however, she may finally get her greatest wish: to walk again.

The poor girl must then decide between being a selfish person to the end or dying in place of someone else she loves before it is too late.

The wicked holidays of cinema

Director and actor Patrick Ridremont assemble a horror film that abides by all the ordinary rules of the genre but is also original.

Of course, this is not the first blood-death story set during the year-end holidays.

We might recall 1984’s Black Christmas, where a serial killer tormented and killed schoolgirls in a women’s dormitory.

In this case, the killer is a supernatural entity that apparently has unlimited power.

However, he can unleash this great power only when someone triggers the calendar to which he is bound.

We also saw this limitation in previous horrors, such as the entertaining 1987 Wishmaster.

However, this spirit does not seem necessarily evil, instead determined to accomplish the ritual to the end.

Both styles succeed without stepping on each other’s toes, fading into each other with flair and excellent editing buildup.

I believe that, especially for American audiences, The Advent Calendar of 2021 may be a suitable movie to approach European cinema.

In particular, French cinema has offered such thrilling horrors as High Tension or the terrifying Martyrs.

In any case, even as mere entertainment, it is delightfully creepy with a compelling monster.

Although it is, as mentioned above, an idea that other filmmakers have already used, it nevertheless feels fresh and exciting.

Therefore, please do not let what may seem like a ridiculous premise discourage you because this is a solid and sinister horror.

An actual horror without easy jumpscare

Eugénie Derouand is another major highlight of The Advent Calendar of 2021, being present in almost every scene of the movie.

The actress gives a convincing and satisfying performance as the dancer who becomes a paraplegic after an accident.

Discussing similarities with other movies, our thoughts run to another wheelchair-bound protagonist in the cruel horror Monkey Shines.

Again we have a miserable outsider who cannot find a place and happiness in the outside world.

Paradoxically, the only one who is firmly intent on helping her is this malevolent and murderous entity.

Yet even the monster does not hesitate to threaten her when she does not want to play along, refusing to kill people she cares about.

Only then does the girl understand what is going on, and the story’s central theme becomes survival.

Every morality argument disappears while everyone she loves perishes to get her through the ultimate task: walking again.

Indeed we have gore and splatter situations, while in other instances, the murders happen offstage, and we realize them only afterward.

The concluding climax veers into a metaphysical model where we ask whether what we have seen is real or not.

We could say The Advent Calendar is a scary fable of 2021 with all the classical elements of the kind.

We have the monster who can get everyone at any time, which the protagonist, not surprisingly, summons by eating candy.

Like the best fairy tales, there is also an ambiguous moral that does not want to dictate lessons to anyone leaving it up to us how to interpret the story’s ending.

Jeremiah Johnson – The Myth Of Most Dangerous Rocky Mountain Man