Jeremiah Johnson – The Myth Of Most Dangerous Rocky Mountain Man 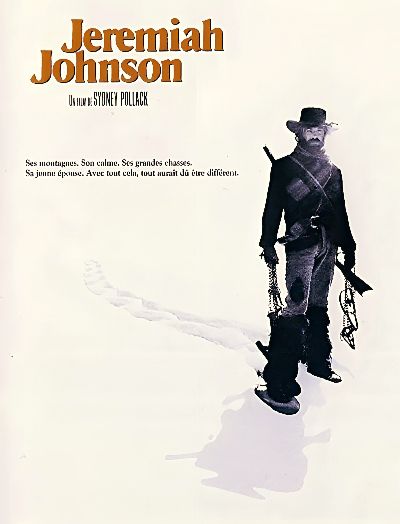 In the long history of American western movies, 1972’s Jeremiah Johnson is one of the most atypical and realistic.

Don’t expect to see a politically correct story with the poor Indians helpless before the massacre of white men.

There are no good or bad guys in the harsh Rocky Mountains, just people trying to survive while staying true to their traditions and personal beliefs.

Because of these convictions, Robert Redford’s character sets out on his long journey to the Northwest.

Having grown exhausted by the long Mexican war and even more tired of so-called civilian life, the man wants to live alone away from everyone.

Initially, the man struggles to hunt and fish in that unfamiliar environment, getting ridiculed by an Indian chief while trying unsuccessfully to catch a fish.

Luckily in the middle of the ice, he finds an excellent rifle in the hands of a frozen corpse. Soon after, a slightly crazy old hunter teaches him the best survival tricks.

Finally ready to build his shelter and live on his own, he ends up nursing a young boy whose mother has gone furious.

Soon after, he is involved in a confrontation between the Indians and another mountain man. After the victory, the latter presents him to the rival tribe as a hero.

As a reward for his exploits and stolen horses, the chieftain even offers him his daughter in marriage.

Before long, the man finds himself married and with a child, looking for a refuge where he can begin a new life.

He ends up, in time, becoming attached to that new existence to his new family. However, a bloodbath would set him on the road to revenge forever.

The hard life of the Rocky Mountains

Starting with John Milius‘ excellent screenplay, Sydney Pollack sculpts one of the most unforgettable Westerns in cinema history.

The heart of the story is ultimately one. Only in the heart of the mountains, far from every convenience of modern civilization, can man discover himself.

Since it is ambiguous like the human soul, whatever we see in this quest for the inner self is beautiful and terrible.

Both white men and native peoples share this truth. Just as American settlers are not all murderers and usurpers, Indian tribes are capable of bloody carnage.

In many westerns, too many times, there are the same stereotypical characters. The standard outfit is always the same: cool cowboy hats and boots with shiny spurs.

Jeremiah Johnson is a 1972 movie with none of these rules. Instead, he appears as an ordinary woodsman who later becomes a warrior without traditional Western manners.

The story’s pace is languid, following the lives of these hardy men and the relentless succession of seasons.

This sure progression, like a flowing river, gives the movie an atmosphere that is both epic and minimal at the same time.

Epic because the events are definitely dramatic, but also minimal because the director always succeeds in being detached.

Duke Callaghan’s excellent cinematography has an almost documentary look, avoiding the over-theatricality of other movies in the genre.

Pollack dwells on the small, everyday details of these lonely lives. With class, he transforms getting food and a shelter to sleep into a spectacle.

So let’s look at these men’s little tricks for surviving the mountain frost. Tricks include sleeping on hot ash, for example, or choosing the best lumber to build a shelter.

These characters’ humanity quickly enters our souls, and when the movie ends, we almost feel like we have lost old friends.

The true epic of the western

Robert Redford plays one of the best roles of his long and successful career.

Although he is a quiet man who would only like to live in peace, he certainly does not back down when it comes to fighting.

His determination fascinates tribal chief Joaquín Martínez, who, although hunting him relentlessly, respects his valor as a warrior.

Indeed, he initially offers him his daughter, the charming and simple Delle Bolton, as a bride and reward for killing rivals.

Just as quickly, he does not hesitate to kill her and Redford’s child, thus exterminating the entire family.

Only at that point did Jeremiah Johnson become the legend. A legend that the natives would respect and pass down through time.

Indeed, it was an honor for the Native to have this implacable enemy, despite the numerous victims of this feud.

Finally, equally epic are the mountain men who help and instruct Redford on how to live in the wilderness.

Stefan Gierasch is as if he were an older, crazier version of the protagonist, a man who has now forgotten about life in society.

Not surprisingly, they meet after a long time toward the end, and neither of them knows which month it is.

More paternal is Will Geer, a kind of crazy grandfather who is the first to welcome Redford when he arrives in the mountains.

Unlike the other, he is more reserved and does not want to get involved in the natives’ constant struggles.

Despite being a 1972 movie, Jeremiah Johnson is still a modern western. A fairy tale about the unforgiving ecology of life in the wilderness.

For younger people who may never have seen it, I can only recommend it to understand what epics in storytelling genuinely mean.