White Chamber – The horror of war in one room 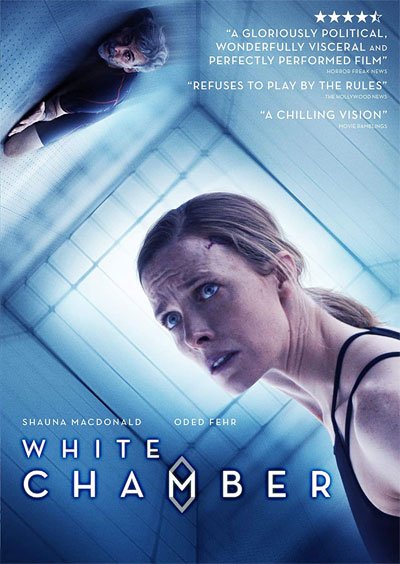 Beyond a movie like 2018’s White Chamber, we do not often find a dystopian future in a highly post-Brexit England.

The story begins near the end, with a woman waking up a prisoner in an empty, completely white room.

Immediately, from a speaker, a man’s voice begins questioning her for answers about the facility in which they are.

She claims to be just a lowly employee responsible for delivering a package and knowing nothing about it.

The man does not believe her, so he begins using the multiple tools in the room to torture her to the point of exhaustion.

But she insists she has no answers, being only a low-level pawn with no access to that kind of information.

Meanwhile, a civil war rages between a group of mutinous soldiers and an adamant central government.

The rebel leader seems to have disappeared, and there are deep divisions even among the army forces.

But within those four white walls lies the secret of a weapon that can turn the tide of war.

This secret will reveal the woman’s dark past and all the scientists who worked there before the disaster.

While the revolt draws closer mile by mile, the torments of that tangle of lives will come to a dramatic and bloody conclusion.

A big war inside a small chamber

Let’s be clear; we are not talking about a perfect masterpiece. On the contrary, the timescale may be too long at a peculiar intermediate step.

However, the characters are few but exceptionally well characterized, as is the political soul of a country engulfed in civil war.

Rebels claim victims amid attacks and bombings, while law enforcement represses any dissent in violence.

In short, we are talking about a context of bad people in which no one is right, and everyone is wrong.

Indeed, we may add that each of them leads the other to hatred and desire for revenge, in a spiral of madness that seems to be self-feeding.

The direction is modest with a brisk but sometimes unbalanced pace. However, we must acknowledge that it does not get lost in unnecessary dialogue or situations.

Everything we see serves to understand small details that previously had no explanation, including the mysterious and terrible white chamber.

The room seems seemingly anonymous, but it perfectly summarizes the tortures of the worst dictatorial regimes in human history.

Within these four white walls, the filmmaking becomes crueler, moving from psychological thriller to outright horror in rapid escalation.

I’ve read horrible reviews on the internet, which I struggle to understand, but then again, every opinion is entitled.

In my opinion, White Chamber is one of the most underrated movies of 2018, paying perhaps for a low budget and not very famous actors.

However, the story works and has a few good twists and turns, assorted sparingly along the less than hour and a half of its running time.

For those who like dystopian science fiction and one-room movies, it is an experience worth trying beyond any review.

Few actors, but lots of emotions

As mentioned, Paul Raschid‘s direction has ups and downs, with good staging but a pace that sometimes loses steam.

The few moments of horror are excellent. Indeed perhaps if the director had wanted to push the envelope of thriller, it would have been even more distressing.

With minimal mise-en-scène and some tight shots, he achieves a good sense of claustrophobia but does not always exploit it to its full potential.

Conversely, I have no objection to the choice of cast, starting with the superb lead, Shauna Macdonald.

The actress previously participated in the fantastic The Descent, an underground horror where psychology was central to the entire plot.

More of the same is true in 2018’s White Chamber, where this strange and ambiguous woman is unquestionably the driving force behind the movie.

Equally effective in the role of his main adversary is Oded Fehr. The charming leader of the revolt against the English motherland is equally brutal and equivocal.

As a matter of fact, his perfect appearance and physique perhaps clash a bit. Indeed, I think a soldier should look more rehearsed and with some scars.

However, the actor has excellent charisma as a prisoner and executioner, alternating with the protagonist throughout the story.

Finally, let us also talk about the beautiful and talented Amrita Acharia, the only scientist in the facility who seems to have a conscience.

Despite her young age, she will challenge the brutal white chamber and the terrible project it conceals.

Unfortunately, the subject of torture and abuse of authority will always be relevant at any age.

This is why I believe White Chamber is a movie we should lift from the disappointing box office results it had in 2018.