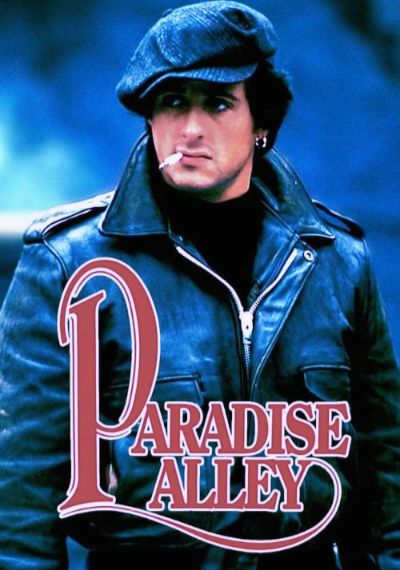 A few years after the great success of Rocky, Sylvester Stallone made his directorial debut in 1978 with a movie that I don’t know how many people remember today, Paradise Alley.

Far from the boxer character that made him so famous, the actor here is a brash braggart living in the Hell’s Kitchen neighborhood.

With little money and little hope for the future, he shares a small home with his two brothers.

The older is a war veteran who now owns a morgue where he disposes of the city’s undesirable corpses.

Instead, the younger one is still strong and vigorous, though more naive, and lives by hauling ice around the neighborhood all day.

Despite their poverty, they live together quite happily, and each has a woman he assiduously courts.

Dreaming of a better life and of getting out of that place sooner or later, they endure the daily labors without complaint.

Everything changes when they challenge the most muscular man of the local boss to an arm-wrestling challenge one night for fun.

The stronger brother wins after an arduous and challenging struggle, so they have an idea to make money quickly.

Everyone knows that in the small club in the area, called Paradise Alley, there are clandestine fights every night.

These punching and kicking shows are violent and bloody, but some very high betting circles are underneath.

So they decide to make their younger brother a fighter, who naively accepts without protest.

However, when he starts to get seriously injured, a bitter argument arises among the older brothers about continuing by risking his life.

Once upon a time, there was a young filmmaker in New York

I have always had mixed feelings toward movies by and with Sylvester Stallone. However, I always end up watching them all.

Undoubtedly, this Italian-American actor/writer/director has been able to reinvent himself constantly over the years.

More than once, I have thought, “Okay, now the old Sly is finished,” only to witness him later return on top as a never-dying phoenix.

Among the different phases of his career, the beginning undoubtedly remains my favorite period. Kicking off, precisely, with 1978’s Paradise Alley, which in my opinion, is still his best movie to this day.

I know I will open the eyes of those who read me wide in outrage. But this kind of directing by Stallone is reminiscent of that of newcomer Martin Scorsese.

Unfortunately, Stallone’s writing is not as deep and destructive as Scorsese’s. However, as a whole, I believe this little NewYorker story can hold its own.

I love the cinematography of the dirty streets perpetually lit by the brightly lit signs of New York City. I think it will always work, as the grandeur of this city contrasts with the small poverty among its people.

So will always work the dialogues of these inhabitants with grit and humor that are smart and dumb simultaneously.

In sum, Stallone sketches a human sampler of great sadness and sensitivity for a city everyone loves but wants to escape from.

He also did not leave behind the sports side that made him famous with Rocky. Yet, even better, he infuses the rhythm with Bill Conti‘s wonderful music.

Three brothers against the world

With his presence and incessant patter, he successfully energizes even several scenes that would otherwise have a slower pace.

His bluster serves to cover up an underlying weakness, which is what makes him interesting.

Not surprisingly, when there is a need for actual violence, he calls his younger brother, Lee Canalito, to the rescue every time.

The actor had also been a former boxer, as we see from his powerful physique, which is not intimidating, given his gentle and naive ways.

Naive, however, does not mean stupid, for he is perhaps the one who speaks with a better vocabulary. He cultivates this talent with the teachings of his beautiful girlfriend, Aimee Eccles.

More complex, however, is the female character of Anne Archer. This sensual and delicate redhead will divide Stallone and his older brother Armand Assante.

The latter is a World War II veteran who returns home with a crippled leg, abandoning all dreams for the future.

However, when his brother begins to succeed, he becomes crueler. Regardless of his injuries, he seems intent on exploiting him to the point of exhaustion.

Instead, at that point, Stallone’s character becomes more caring, even though, at first, he pushes his younger brother into the fight.

Summing up Paradise Alley of 1978 in one sentence, it is a love-hate movie between three brothers. Three men who have difficult characters but are basically generous.

So don’t miss this portrait of postwar New York City humanity. It also will help you get to know a different side of director and actor Sylvester Stallone.

White Chamber – The horror of war in one room

Memento – Remember Not To Forget...