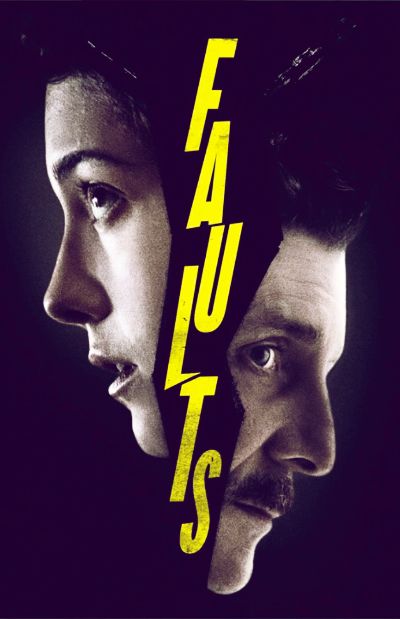 We are often sure of the truth about our lives, only to discover that we are dead wrong, like the protagonists of this 2014 movie, Faults.

The story begins with a psychologist in financial and moral bankruptcy, having lost everything meaningful about his existence.

While in a hotel promoting his latest useless book, he meets a pair of parents who ask him to help them with their daughter.

Indeed, long before, the psychologist was famous for bringing victims of cult or guru plagiarism back to their families.

After a TV interview with one of his patients on television, where he heavily humiliates her, his career ended in tragedy.

That had been where he lost all his money, his marriage, and any shred of self-respect.

Having an enormous debt to repay quickly, he accepted the proposal of these two struggling parents without hesitation.

With some accomplices, he kidnaps his daughter and takes her to a hotel room. Thereupon he seeks to deprogram her loyalty toward the cult she was a follower of.

Unfortunately, he will not be able to talk to her for long, as her creditors begin to pressure them to get their money back.

At the same time, her parents also obstruct the sessions with their presence, making the girl uncomfortable.

The psychologist feels more desperate, trapped, and alone. Paradoxically, it will be the one he has to help who will help him in turn.

Although her talk sounds crazy, he begins to trust her and listen to her words. She is the only one seemingly genuinely happy and at peace within herself among the strange people around her.

The endless cure against happiness

I recommended Holy Smoke not long ago, where a girl was taken away from a cult and isolated with someone to talk to.

Then, a great couple of actors, Kate Winslet and Harvey Keitel, engaged in a marvelous verbal duel of uncertain outcome.

Faults of 2014 is a similar movie in the starting idea, but with entirely different premises.

It starts out looking like a human drama about a lonely, pathetic man. Yet later, it changes a lot, becoming a thriller with almost fantasy overtones.

Is it the girl who is insane and has faith in a cult that promises to talk directly to God?

Or maybe she is the only sane one while everyone around is a lunatic wanting to deprive her of happiness?

Throughout most of the story, these are the questions as we witness a cure revealed to be worse than the evil it aims to heal.

The doctor is a human wreck who seems unable to help even himself. His life is losing pieces as a broken-down car along the road.

Even worse are the parents, being as overbearing as they are obtuse in not wanting to listen to the girl’s reasons.

Of course, everything changes in the finale with a quick twist that leaves us breathless. But when we finally realize that nothing is as it seemed, we see everything in a different light.

Riley Stearns signs his first work in a series of movies that so far have always managed to surprise me.

After this debut, in fact, will come his intriguing The Art of Self-Defense and Dual. Two more stories that, not surprisingly, are about misunderstood and unhappy outsiders.

With his classic, calm, and thoughtful editing and direction, the director is one of the newcomers I will continue to follow.

The hypnosis of perfect acting

Besides being a great director and writer, Riley Stearns is a perfect leader of actors and actresses who consistently perform at their best with him.

After minor supporting roles in many movies or TV series, Leland Orser reaches the pinnacle of his career with this character.

This anti-cult deprogramming doctor is still firmly convinced of his beliefs, thinking he is giving free will back to the brainwashed victims.

The beginning describes this finished man with a few powerful scenes of poverty and despair. For example, we see him fighting to pay for breakfast or trying to commit suicide with the tailpipe of his car.

In short, he is a man with whom we hardly empathize. However, he emerges as a protagonist we are intrigued to follow and see how low he can fall.

Soon after, an opposite character enters the scene, the beautiful and seemingly lost soul of Mary Elizabeth Winstead.

I had admired this actress since the distant days of Scott Pilgrim when she was every nerd’s wet dream.

More recently, she starred in the fantastic Kate, where she was an unbeatable killer. Nearly owning the John Wick style, having not coincidentally the same producers.

Here she is an ambiguous character, seeming weak and naive but not. Just as perhaps she is not the one who needs help, as everyone believes.

Her delicate beauty does not diminish her strength and determination. Moreover, her rough and sensual voice lulls the frightened protagonist into silence.

Faults is a surprising movie, small but complete and perfect, besides being the debut of a director who has never failed since 2014.

If you haven’t seen it yet, the cure is simple. Just click on the streaming link right below.