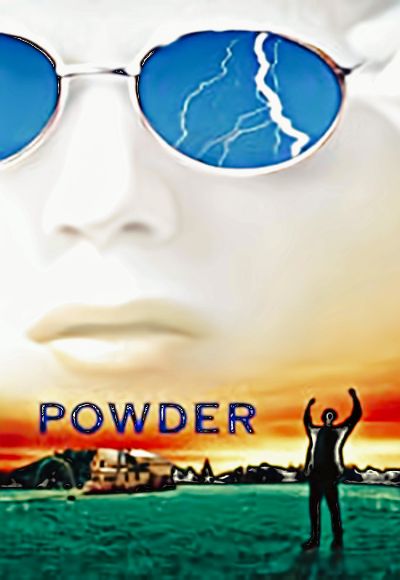 If you are looking for a mix of superpowers and troubled teens, Powder is a movie from back in 1995 that is still perfect for you today.

The story begins with police in a small Texas community who visit an older man who has not been in town for some time.

There is no answer at the door, so they force their way in and find the man dead in his living room.

But this is not their only discovery; indeed, searching the house, they discover a mysterious guest hiding in the basement.

The boy, wholly bald and very fair-skinned, is actually the man’s grandson, whom he and his wife have cared for since childhood.

His mother died bearing him, and given his delicate condition, his grandparents had kept him hidden all his life.

At that point, the police transfer him to a center for troubled youth. Unfortunately, it will not be long before he reveals a strange sensitivity to others.

Unfortunately, his peculiar appearance and behavior lead him to be bullied by some bullies who constantly harass him.

However, he falls in love with a girl, while the psychologist and a math professor help him understand his abilities.

To his amazement, the professor discovers that the boy is enormously intelligent. He is so bright that, in measuring his IQ, they are unable to give him an adequate evaluation.

In addition, his body seems drawn to and attracts magnetic fields and electricity, sometimes in a dangerous way.

His diversity will make him alienated from everything and everyone, as both children and adults fail to understand and live with him.

In one sentence, 1995’s Powder is a science fiction movie about a different person society cannot let live in peace.

The boy would like to stay in his grandparents’ house, reading his beloved books without hurting anyone.

I think this is an adolescent phase many of us have gone through when we have had enough of everyone at some point.

Unfortunately, his extraordinary condition only draws more attention and curiosity to him, exacerbating his situation.

His peers exclude him from the group, taking out their adolescent meanness and mean-spiritedness on him.

Actually, this anger stems from fear of something they do not understand. However, not only this, since the boy could eliminate them all effortlessly with his powers.

The same thing we can say for adults, such as the amazing sequence in which the principal compliments him on his intelligence test.

Reading his mind, the boy realizes that the man simply believes he cheated. Therefore, he ridicules him in front of his colleagues, finally walking away as if nothing happened.

As is often the case, some people cannot stand the presence of someone intellectually superior to them. When it comes to the worst-case scenario, they deny the facts to the point of violence.

Many consider Powder a little 1995 movie with a weird kid with superpowers, but I see it as a perfect metaphor for American society.

Special effects are few but appropriately used at the right time for a maximum dramatic impact. Perhaps there is some stretch in certain sequences to emote the spectator, but nothing that is ever overly annoying.

Overall, every scene and every character has meaning without unnecessary filler. Indeed, pace and situations carry us fluently toward a touching and unforgettable ending.

Recovering a little gem from the 1990s

I have always admired Victor Salva since he uses a classic filmmaking style with an ever-modern and original look.

Unfortunately, we have not heard from him since 2017’s Jeepers Creepers 3, already produced with extreme difficulty due to the director’s personal and legal problems.

However, today I do not wish to discuss his problems. Instead, I want to talk about 1995 Powder, a powerful and intelligent movie about the lack of social integration.

Sean Patrick Flanery is an excellent protagonist, shy and reclusive yet curious about an outside world he has never known.

This boy fears his power, trying to distance himself from everyone before he ends up hurting someone.

Some of the most intriguing moments are when he studies his power with the professor, played by Jeff Goldblum.

This is not the first time the actor has played a scientist; we already remember him from The Fly and Independence Day.

But each time, we appreciate his part as a man honestly interested in knowledge and helping others without ulterior motives.

More delicate and personal is the intervention of psychologist Mary Steenburgen, with whom he has his first human interaction after his long years of loneliness.

The woman has no easy task trying to make him understand that not everyone is a bully. Unfortunately, she cannot allow him back home as he asks.

Finally, we have Lance Henriksen, one of my favorite actors since Terminator, in this case as the tough but also sympathetic sheriff.

In conclusion, Powder is one of the fondest movie memories I carry from my teenage years. I hope that it will also become part of your life if you get a chance to see it.