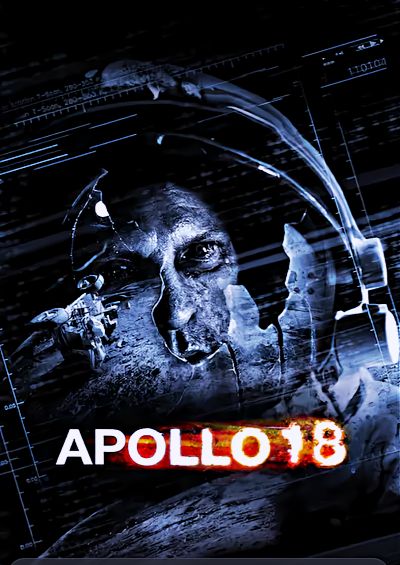 Perhaps nowadays, trips to the moon do not fascinate us as much as they once did, yet Apollo 18 is a 2011 movie that gives new fascination to the subject.

The story is a fake documentary that appears anonymously on the Internet and tells of a top-secret NASA mission.

As the purpose of the mission, the three crew astronauts must secretly fly to the Moon. Once down there, they must put an old U.S. military equipment module back in service.

This equipment had been planted during the Cold War and was a sophisticated espionage system against the powerful Russian enemy.

While one remains in orbit around the satellite, the other two descend to the lunar surface, beginning to make repairs.

The mission seems to proceed quickly and smoothly, but they notice strange movements outside the module at some point.

Following the tracks, they arrive at a nearby crater, inside which is a corpse with a smashed visor and a Russian spacecraft.

They then realized that the Russians had found something hazardous while analyzing the moon rocks.

In addition, a strange parasite infects one of them, penetrating his suit while returning to their module.

They contact the command center in a panic asking for help, but their superiors have already decided to abandon them to die far from Earth.

The only hope, therefore, is their colleague who is still orbiting the Moon. Although NASA clearly orders him to abort the mission, the man is conflicted about whether to abandon his friends.

We don’t like the moon as we once did?

I have to admit that I am not a fan of the Paranormal Activity movie saga, of which 2011’s Apollo 18 might seem almost like a clone in a Sci-Fi guise.

Let’s say, however, that, in this case, the poor quality footage has justification, as everything we see comes through the internal cameras of the NASA spaceships.

After a brief introduction, we know the few main characters and go straight into the mystery without wasting more time.

In this alternate reality, we will find out why NASA decides to stop missions to the Moon after the 1970s.

The one subsequent mission will later be completely covered up by the government. Covering up the horrible end of the astronauts, indeed, will cover up the dark espionage maneuvers of that era.

I honestly don’t remember many other moon movies since Ron Howard‘s famous Apollo 13. It was a great success, highly impressive even if a bit too flat in American exaltation.

Apollo 18 takes us back into that kind of atmosphere, but definitely toward the horror genre. I consider this mixture enjoyable, mixing the alien scare with the good old Cold War climax.

Conspiracy theory in cinema has always worked, as we know after seeing movies like The Blair Witch Project, decidedly similar to this one today.

It is certainly not a perfect plot. Indeed, perhaps some tedious moments in some sections of the narrative would have benefited from more suspense.

The beginning and end are fascinating, with some cleverly crafted horror moments more to hide than to show.

I have read many reviews and opinions on the internet that slaughter this film beyond belief. I think, without offense, perhaps they are the ones unable to accept what this low-budget production honorably offers.

A little movie that we should revalorize

Although not many people are familiar with it today, Apollo 18 was a movie that earned well at the box office in 2011.

Mind you, I mean, it earned well even compared to its minimal budget of just $5 million.

Nevertheless, Gonzalo López-Gallego humbly does a good job bringing out the best in what he has at his disposal.

Let us also say that the director who is lucky because to assist him in production is fellow Russian Timur Bekmambetov.

I have always loved his movies, which are as improbable as they are damn funny, like Wanted or Abraham Lincoln: Vampire Hunter.

To some extent, many devalue this filmmaking philosophy of the kind that many snobs would call B-Movies.

Of course, one should not expect special effects and billion-dollar sets. Unlike Ron Howard‘s aforementioned Apollo 13, there are many ways to make a movie.

In this case, the choice to make a fake documentary exacerbates the conspiracy theory. This marriage of sci-fi and horror genres is an exquisite charm with consistently high suspense.

I realize not telling much about the plot yet revealing the few plot twists would spoil the movie’s finest moments.

I just want to say one last word about the trio of lead actors, Warren Christie, Lloyd Owen, and Ryan Robbins.

They may be little known, but you can see that they believed in this little project, acting believably with great concentration.

In my opinion, this film remains a low-budget stylish experiment I immensely recommend trying.