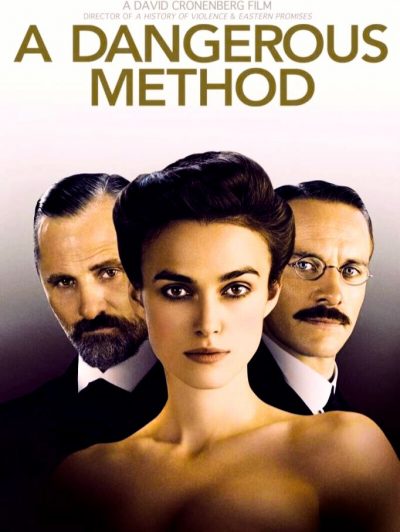 A Dangerous Method is a 2011 movie about the early days of psychoanalysis, involving two of its most famous proponents, Carl Jung and Sigmund Freud.

Freud was already abundantly known among the international medical community for his controversial theories on the unconscious and dream analysis.

In contrast, Jung was still an unknown young doctor working in a small hospital in Switzerland.

Everything changes when the latter treats a young patient suffering from unexplained mood swings, aggression, and depression.

The other doctors quickly diagnose her condition as hysteria, sanctioning that there is no possible treatment for her.

Jung takes a different view, beginning to talk with her and investigating her childhood to understand the origin of her problems.

Therefore, trying to help her, he travels to Freud for advice, who is fascinated by the young doctor’s ideas.

Seeing in him a possible ally in refining psychoanalytic methodology, he suggests focusing attention on his patient’s sexual tendencies.

After numerous sessions, the treatment succeeds, and the rehabilitated girl even begins to study, ultimately becoming a psychiatrist herself.

However, his relationship with the doctor now goes beyond the professional sphere. Both will secretly consummate a sadomasochistic passion that, still, an ordinary society cannot accept.

In addition to undermining his work, the secret affair will jeopardize the marriage. Indeed, his young and naive wife sees him suffering, but she is entirely unaware of what is happening.

Unfortunately, this will also mark the end of Jung and Freud’s collaboration, as the latter cannot tolerate such involvement during therapy.

The inner glory of the human mind

Based on a theatrical play, David Cronenberg brings to life a quick summary of some of the most critical years in modern medicine.

We can debate the actual effectiveness of psychoanalysis, but A Dangerous Method is nonetheless one of the most important and underrated movies of 2011.

The director brings two men of great charisma and courage face to face. Despite their differences, they will go against everything conventional mental therapies of the time advocated.

Many doctors even laughed at talking to these socially maladjusted patients, preferring to isolate or treat them with frozen bath shock therapies.

Personally, I have always believed that talking to someone about a problem is always a step in the right direction. Not surprisingly, I believe talking to a stranger can be more helpful than a relative or friend.

A relationship of great mutual respect develops between the protagonists. With great pride, the elder sees a possible heir and pupil of his theories in the young man.

But their cultural differences split when Jung begins to put spirituality in the middle versus Freud’s pragmatic analysis of the unconscious.

Cronenberg perfectly curates the period staging in every detail. Analyzing carnal and religious impulses of these characters lets us understand that, in their way, they are perhaps all insane.

In the end, what emerges most is there the absurdity of how psychoanalysis arose from these people. Although strong and stubborn, they are also weak and victims of obsessions like the rest of us.

Viggo Mortensen continues his collaboration with David Cronenberg, starting with A History of Violence and moving on to Eastern Promises.

Still today, the actor dazzles the screen arriving in 2022 with the splendid Crimes of the Future.

2011’s A Dangerous Method is his most composed and measured performance. Paradoxically, he is in the role of one of the most controversial men in medical history.

His friend/rival, played by Michael Fassbender, another of the best actors of recent generations, is much more fragile but equally determined.

The doctor he plays is never quite sure of his ideas, but the failure or skepticism of others never deters him.

Not only Freud will be essential to his education, but also his bizarre colleague Otto Gross. The latter is brought to the screen by the excellent Vincent Cassel.

Beginning as his patient, the doctor will tell him about his many romantic experiences with some of his female patients. He will eventually convince him to get involved with the gorgeous Keira Knightley, another fabulous character.

She begins as a confused and trembling girl locked up for over a year in an asylum. Then, however, she will become one of the first women in the psychoanalytic profession.

In sum, Cronenberg admires and criticizes all these characters simultaneously, praising their passion and showing us their smallest and vicious flaws.

The moral is that we are all human beings. We are beautiful and imperfect, trying to hold hands on our journey through the world and life.

More importantly, what can save us in dark times is not money and power but communication with others and introspective analysis.

So let us enjoy this tremendous cinematic spectacle of 2011’s A Dangerous Method, learning with awe how the first great psychoanalytic movement in human history was born.

Undead – An unlucky but hilarious...