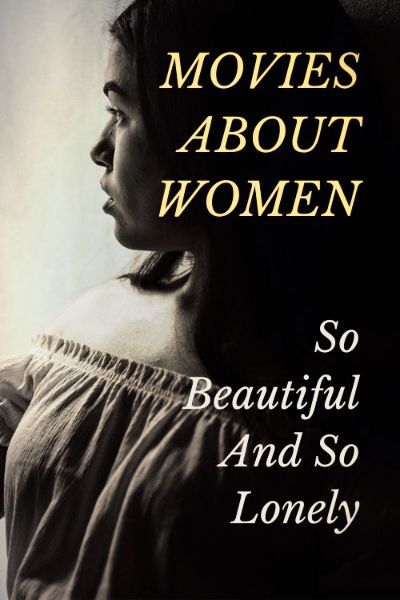 Beauty, unfortunately, does not equal happiness, as the beautiful women in the movies we are talking about today know very well.

Loneliness is a disease afflicts everyone beyond our wealth, religion, gender, and cultural background.

Often much of the problem comes from having people around us who do not understand us. Adding to the frustration is the fact that they also claim to give us life advice.

But being lonely and alone is not the same; unfortunately, many people do not want to or cannot understand.

Indeed, it is easy for others to judge quickly and summarily. Judgment especially affects those who do not live by the canonical standards of modern society.

To be treated as such, one does not need to be a rebel, but just pursuing one’s freedom is enough to annoy certain people.

Looking at the women protagonists in today’s movies, this will be evident to you as never before.

So let’s sit in a corner and spy for a few hours on the lives of these beautiful ladies. Who knows, maybe we can even learn something from their stories.

As our first female and lonely experience, we start with a young girl from Paris who has a menial job as a museum clerk.

Besides loneliness, what deeply disturbs her life are sudden and unexplained pains that grip her belly.

Unfortunately, after many tests and medical examinations, no one can explain the cause of her ailment.

At that point, she becomes convinced that the origin of everything may be psychosomatic, so she decides to consult a psychiatrist.

Her many sessions with this charming young doctor are successful, and she begins to feel better. Her pain slowly fades, finally being able to be happy again.

Indeed, therapy works even more than it should, as the girl falls in love with her psychiatrist and moves in with him.

After the brief initial idyll, however, the couple begins to slip into apathy and indifference, and her stomach pains return to haunt her.

So she decides to begin new therapy with someone else, convinced that her man is too emotionally involved to help her again.

Rummaging through photos and documents in the house, she discovers he has a twin brother he never told her about.

Arranging a meeting with him, she discovers to her surprise, that he is also an established psychiatrist. She then begins to be treated by him and, before long, becomes his lover.

The brothers are very different since one is a gentle and caring lover, while the other is a sexually sadistic and domineering man.

Yet the latter seems to be able to give her more pleasure than withering love with her partner. So, though tormented, the girl will have to decide which of the two can make her truly happy.

Double Cure at Half Price

Obviously, the underlying theme of a film like Double Lover is that of the ambiguous duplicity of the soul and the human heart.

Director François Ozon always treats the sexuality of his characters openly and shamelessly.

It is no coincidence that she puts Marine Vacth‘s naked body center stage in many situations. The French actress and model have a delicate and distinctive beauty that is difficult to describe.

We learn about her foibles and fears and how she is searching for a haven for her feelings that may not exist.

Her two sides emerge in her love for these two men who are so different if yet so identical.

Depending on her lover, she becomes more arrogant, snobbish, or submissive and humbles herself, almost annihilating herself.

The performance of Jérémie Renier, capable of being two opposite characters but equal in gestures and speech, is sensational.

The actor works on less obvious subtleties, putting his talent into the silences rather than the dialogues. His icy gazes love the woman without ever really being able to understand her.

Simply perfect is the director’s work in the aesthetics and rhythms of the story, sowing the answers to understanding her within it.

For example, note that numerous shots with characters are reflected in mirrors. This occurs, especially when they seem to be thinking about something other than what they say.

The woman is alone and helpless, only seemingly, between two men who seem almost to mock her with disinterest.

Of course, there is much more in the ending, where the women’s soul/body conflict blends as in David Cronenberg‘s best movies.

We change the movie genre entirely while remaining in beautiful Paris in the company of a woman equally lonely as the previous one.

According to the title, the main character is a Personal Shopper. Meaning she is someone responsible for buying fashionable clothes and jewelry for a celebrity without time to shop.

It may seem like a childish and almost stupid job to the uninitiated. Yet it is a common job and carries great responsibility because it always involves expensive and delicate objects.

On the other hand, the activity she does in her spare time is entirely different, about which she does not like to talk much.

The girl is a psychic who purifies supposedly haunted houses, trying to appease restless spirits by guiding them to peace.

However, she cannot talk with the ghost of the one she most desires; her brother recently died of a severe illness.

He was also a psychic, so she believed they could stay in touch even beyond death through their power.

Despite this, a presence constantly follows her every day as she tries to figure out if it is an evil spirit or just a lost soul seeking help.

At the same time, a mysterious admirer continuously sends her messages to seduce and dates her in some hotel rooms.

She reciprocates his advances, more out of boredom than genuine desire, until she realizes that the man could be hazardous.

As her little world of wealth and snobbery comes crashing down, she must finally leave town before it is too late.

As in the usual subtle and intuitive style of Olivier Assayas, we could say that the plot of Personal Shopper almost seems not to exist.

For example, I could not tell you precisely what kind of movie it is.

Is it a thriller? An existential drama? A ghost story? Actually, it is a bit of all that and more.

In this succession of events, dialogues and situations, we follow the protagonist step by step as if she were just an ordinary girl.

Among many doubts, we can say with certainty that this role is the best consecration of Kristen Stewart‘s young talent.

The actress breaks away forever from her fame as a teenager in love with the Twilight saga. Proving she can act with class, minimalism, and elegance, paving the way for her future career.

In this movie, however, she plays a very different woman, paradoxically alone in the most romantic world city.

Through long, uninterrupted sequence shots, Assayas strips the protagonist of all her emotional layers. Finally, he leaves her fragile emotionality at the mercy of mysterious forces from which she has no protection.

Tense scenes are few in number, wisely dosed at the story’s most important moments, reaching into supernatural horror at times.

Many narrative choices are unclear, but it does not matter. For example, we will not know her stalker or ghost identity, but we will choose the truth.

So I can understand the many people who did not like the film, calling it confusing or inconclusive.

However, only if they will have the same courtesy toward me. Indeed, for precisely the same reasons, I consider it another extraordinary addition to a director’s filmography, more unique than rare.

After two movies with women living in the isolation of reserved and suffering loneliness, we come to a young girl physically cut off from the rest of the world.

Indeed, the main character is a London musician who became blind as a child during the Kosovo War in Yugoslavia.

Despite her handicap, she still manages to have a successful career on the piano, joining one of the city’s most respected orchestras.

However, fate turns her life upside down, changing everything in one night with the brutal murder of her neighbor.

For the police, she is the only witness. Although she obviously cannot have seen anything, she can always help them in their investigation with her highly refined hearing.

The story becomes dangerous when he realizes that the killer may be a dangerous Serbian war criminal. But the victim was also a friend of hers, so she cannot and will not back down.

Concerned the girl might frame him, he instructs his best agents to surveil her to figure out the girl’s intentions.

The agent, however, watches the woman so closely that he falls in love with her, worrying that his boss may give him orders to kill her.

Even the girl, however, is not as innocent and helpless as she seems. She also plans to take revenge on the criminals who ruined her life in her loneliness.

The bitter poetry of loneliness

In Darkness is an enigmatic movie that reveals its plot a little at a time, just like the beautiful protagonist Natalie Dormer.

The actress plays a young but already troubled woman, alone in the darkness where she has lived since childhood.

While initially appearing as delicate as a flower of rare beauty, she too unleashes her grit as the minutes pass.

Indeed, when the danger bar is crossed, we understand why he chooses not to help the police.

Equally handsome and ambiguous is young Ed Skrein, a killer in the pay of the killer who, instead of taking out the witness, ends up falling in love with him.

He is as lonely and isolated from everyone as she is. It is impossible for both of them to have an ordinary life of family, friendships, and work like everyone else.

However, the cruel Jan Bijvoet threatens the love between the two outsiders. Indeed, the war criminal commands an army of loyal soldiers ready to do anything to protect him.

Although it flows without hesitation, I think the biggest twist will inevitably divide the audience’s opinion.

The surprise is bordering on a stretch that not everyone will be able to accept. But it is also intuitable from numerous clues scattered earlier.

It remains a film with several flaws, including Anthony Byrne‘s too-clean direction, which could have been more carnal and cruel.

Still, the director works fine but pays for his predominantly television experience, far from the style and pace of the movie screen.

Yet the character of this movie’s lonely, fierce woman manages to astonish and enthrall. Despite a plot already widely seen elsewhere, it is undoubtedly one of the best female performances in recent years.