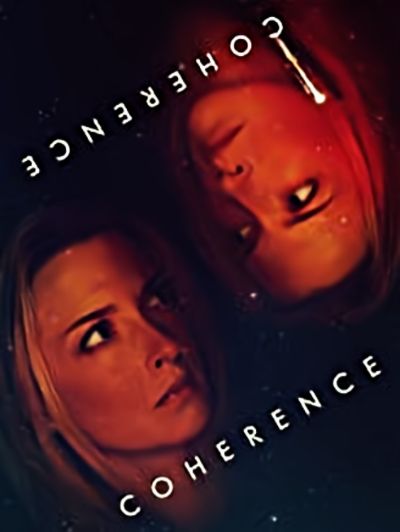 If you have always wished to travel through space-time with your relatives and best friends, 2013’s Coherence is the movie for you.

Indeed, it begins with a dinner among an ordinary group of people who get together after a long time.

The evening seems to proceed smoothly, despite the little dramas that you cannot miss in such a situation.

For example, an ex-girlfriend is still in love with her friend’s partner, not accepting the current situation.

Alternatively, the irritable husband annoys everyone and unwittingly leads the wife to take sedatives to endure it.

Anyway, the sky is stunning this evening because of an unusual and brilliant comet descent all admire from Northern California.

Some of these friends venture outside to figure out what is happening, only to return a few minutes later shocked.

Indeed, walking away, they found themselves near a house that looked very familiar. Incredibly then, spying through the window, they saw a group of people at the table exactly like all of them.

Being the same, they too must have had the idea to walk outside the house and spy on them. Can they trust them, or have some of these doubles substitute them, carrying out some mysterious plot?

As the night drags on for what seems like forever, friends and family will discover what they are really willing to do to survive.

The appeal of low-budget science fiction

While it seemed like the beginning of a promising career, 2013’s Coherence is James Ward Byrkit‘s only movie to date.

Successfully involving a low-budget production and a small group of actors, the director realizes the story inside his home in just five days of shooting.

The home that should be every family’s safe nest by definition becomes a claustrophobic trap where no one trusts anyone.

Cleverly the plot lets us guess what will happen through a few small clues at the beginning, almost as if we were watching a murder mystery.

Later, the skillful direction and script question whether what we have seen is true. A narrative choice sustains by recomposing some situations several times with different results.

One of the things I most appreciate is the fact that the plot is intricate but easy to understand. Even better, it is possible to understand it without the script resorting to obvious, lengthy, boring explanations.

The excellent pacing retraces the same moments from the eyes of different characters. Although some dialogue is sometimes slower than others, there is always a palpable sense of menace.

Moreover, the story never gets stuck in stupid and unnecessary situations, instead managing to grow by the minute until an unexpected and ruthless ending.

As a result, we have a film with a distressing and tense atmosphere. A suspense that never relents, precisely because it questions the supposed safety of every single person inside the house.

I have often said that production could be poor in money, but if it is rich in ideas and talent, it can be better than many big Hollywood blockbusters.

The infinite universe of the human mind

The director builds the story relying on intuition and inspiration, improvising several situations that will later be critical turns.

Of course, 2013’s Coherence is not the first movie to exploit time paradoxes and multiple universes in its plot, yet it stands apart from many others in this genre.

Indeed, what is most destabilizing are not the cosmic space-time events but the petty lies and betrayals within the group.

For example, at first, Emily Baldoni and Maury Sterling seemingly are the perfect couple that everyone envies and admires.

But as the hours’ pass, they reveal themselves for what they are, especially the woman on whose face the story closes.

Hugo Armstrong is equally enjoyable as the science enthusiast who tries to explain what is happening rationally. But despite his intelligence and culture, he deceives himself like everyone else.

The box in which each character puts a different object is a metaphor for Schrödinger’s cat box. The well-known scientific experiment is one of the most frequent examples to explain the rudiments of quantum mechanics.

As mentioned, the director does not venture into science fiction over the top, preferring to focus on the group psychology of the evening’s dinner guests.

However, the plot never lacks tension, with mind-bending moments of significant impact. The situation degenerates from ordinariness to sheer madness, yet an underlying believability remains.

Unfortunately, Coherence did not have great success at the box office in 2013, despite being a charming movie in pure Twilight Zone style.

That doesn’t stop us from enjoying it today, so let’s fish this sci-fi gem out of the ocean floor. Let’s give it a good polish and watch it repeatedly because projects like these live in our admiration.