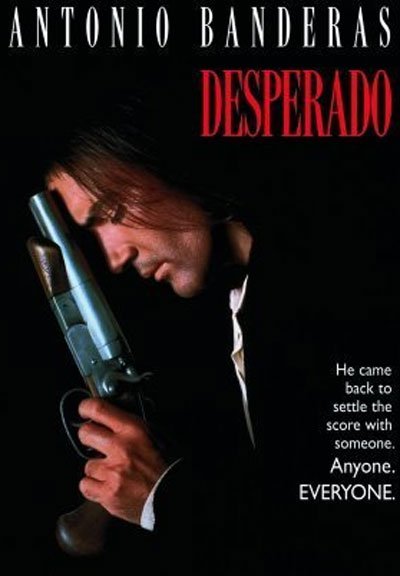 Desperado is one of the most classic examples of 1995 action movies, full of spectacular violence that it expertly mitigates with great humor.

The story follows the adventures of El Mariachi, the cinematic debut of Robert Rodriguez. The protagonist was a harmless street guitarist who became a fearsome gunfighter through a series of misfortunes.

Deeply scarred by grief, he still regrets losing his woman and a hand to the jealousy of a crime boss. So he wanders around making carnage of criminals, no longer able to play guitar or love as before.

Nevertheless, he continues to carry his trusty guitar case, in which there is now only room for weapons.

His music today is the shots from his guns. Becoming an artist of death, his murders are legends among enemies who fear his vengeance.

Along the way, however, he meets a girl who will give him another chance to return to love. She is a librarian close to the city’s most powerful boss, who loves her just like the mariachi.

However, the boss is also in the crosshairs of a large drug cartel, which sends a dangerous assassin to kill him.

Amid this gang war, these lovers must face dozens of crazed criminals armed to the teeth. Except for them all, and even the boss, fate holds a cruel twist that will bring revenge in a new light.

Desperado is a hilarious 1995 mix of comedy, over-the-top action, and a love movie that winks at the style of classic Westerns.

The protagonist is the stereotype of a man who has lost everything and can’t forget a past that tormented him.

Compared with his debut with El Mariachi, perhaps the characters and situations are more stylized in the canons of American cinema.

Not surprisingly, director Robert Rodriguez has a considerably larger budget than in 1992’s $50,000. However, even $7 million is still much lower than the average for any other American action movie.

As a result, it is a nonstop spectacle that thrives on being wholly absurd and deliberately stupid in many situations.

The action scenes are exciting and always feature a strong dose of irony. Together with a kinetic spectacularity worthy of the best Eastern action films, the winning recipe is served.

Those who know them easily recognize inspirations from directors such as John Woo, Dante Lam, or Tsui Hark.

Beyond that, there is much of Sergio Leone‘s Italian western in the frame cuts, such as the classic close-ups of the characters’ eyes.

Robert Rodriguez wraps these influences in a delicious cinematic burrito of rare excellence. A thrilling emotional orgasm for any lover of the off-the-wall action genre.

It is no accident that Quentin Tarantino fell in love with his style. Indeed, 1995’s Desperado is the beginning of a lasting friendship and movie collaboration.

Once upon a time, there was a tremendous unknown cast

The Spanish actor moves as elegantly as a dancer as he tears his enemies apart and shows a dark, dramatic side.

Equally unknown at the time was Salma Hayek, whose Mexican beauty brings some joy and light to a story of violent and cruel men.

The stunning actress would soon become a shining international movie star like Banderas. For example, a few years later, she would play the sexy, unforgettable vampire stripper in From Dusk to Dawn.

Also hilarious and original are the various cameos in minor roles, which add further irony to an abundantly crazy story.

First, we have the usually phenomenal Steve Buscemi, who opens the movie in the opening scene with charisma and much talent.

In addition, we have the villain Danny Trejo in a preview of what will be the future Machete character. Armed with endless knives, the tough-as-steel actor tears his enemies apart in the style that will make him famous.

Finally, we have a brief but entertaining appearance by Quentin Tarantino, establishing an unbreakable friendship with Rodriguez.

For example, Tarantino will shoot a short scene for him in Sin City, while Rodriguez will arrange some of his songs for Kill Bill.

Although they have two very different styles and interests, they share the same idea of popular cinema, far from the intellectual elite.

The pinnacle of this collaboration would be reached with the 2007 double feature Grindhouse. It was an enjoyable homage to a drive-in cinema, which unfortunately failed resoundingly at the box office.

Nevertheless, both filmmakers continue pursuing their little avant-garde in a Hollywood sadly increasingly devoid of ideas and talent.

The Colony – Humanity restarts from...