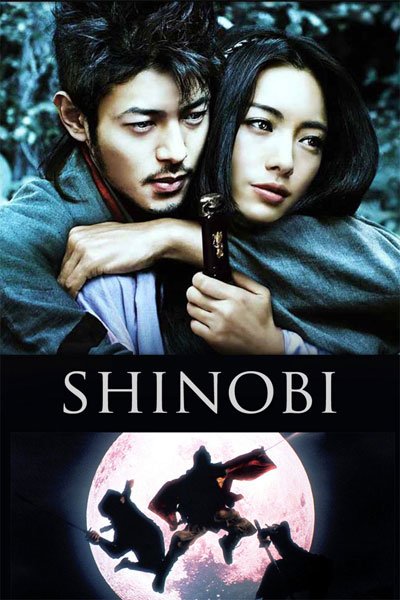 If you love fantasy and eastern movies, you certainly cannot miss 2005’s Shinobi: Heart Under Blade.

This tale of spectacular fighting and old-fashioned romance takes place at the dawn of the great Japanese empire in the 1600s.

Although peace reigns over his kingdom and wars are far away, the Shogun still fears the strength of the ancient ninja clans Koga and Iga.

These men and women not only have unparalleled training in martial arts but are also capable of incredible supernatural powers.

Fearing they might one day oppose his power, he decides to get them out of the way. Unwilling to be directly implicated, however, he forces them to engage in a deadly confrontation.

The warriors of these clans are trained from childhood to hate the rival clan, so they look forward to the battle.

However, the two leaders have always been very different, as they secretly love each other.

Still, they differ about this challenge, as the woman in no way questions the orders received from the empire.

The man, instead, sensing that this war is a deception, sets out to ask the Shogun directly for an explanation.

When the clan finds out, he plans to ambush him along the way to behead his clan head.

This journey will then be replete with opponents eager to kill him at every turn, chosen from among the empire’s most dangerous ninjas.

His soldiers, however, will not stand idly by, rushing to back up their leader in one last epic battle.

Amid this unstoppable carnage, the two lovers eventually must choose between their feelings and loyalty to their clan.

Lots of beats and special effects in classic Japan

The love story is always the plot center in one way or another, even amid the many ninja fights.

You will undoubtedly be home in this movie if you love over-the-top warriors in full Mortal Kombat style.

There is something for everyone: poisonous women, supersonic swordsmen or shape-shifting warriors, and others armed with deadly Wolverine-like claws.

Moreover, each has different motivations, more or less noble if not entirely selfish, that will ultimately overturn the outcome of some fights.

In this regard, we must admit that Eastern cinema is unrivaled in this field. Even today, oriental movies are unique and original, as well as always keeping up with the times.

But please do not make the mistake of thinking that 2005’s Shinobi is a movie with only one after another punch-up scenes.

Although in a fantasy context, the plot manages to respect a certain kind of historical veracity of the shogun era.

Honor and warrior spirit are combined with the petty pursuit of self-interest. It is no accident that these powerful men are often cowards who only watch wars from afar.

Personally, I would have liked more moments of intimacy between the two lovelorn protagonists, perhaps sacrificing a few combat scenes.

However, their relationship is more than evident from the first minutes when they look into each other’s eyes silently under a waterfall.

For all those who want to open their eyes to Japanese culture, starting with fiction, 2005’s Shinobi is definitely a great starting movie.

Why don’t these eastern movies come to the West?

Shinobi: Heart Under Blade is a spectacular action novel set in a fantasy and historical world.

Like modern-day Romeo and Juliet, the protagonists are hopelessly in love, followed by a host of warriors with superpowers.

The beautiful Yukie Nakama, a warrior capable of overpowering enemies’ minds with her magnificent eyes, is the leader of the Koga.

In contrast, young Joe Odagiri, a warrior so quick with the sword that he imposes panic on opponents, is the leader of the Iga.

Their warriors have well-defined personalities and specific motivations, which I have discussed. Yet if I told you more would spoil the surprise, because I want you to find out for yourselves.

Finally, it is a perfect reconstruction of the era of the Japanese empire. In those centuries, it achieved peace and prosperity, it is true. Yet this comes only through bloodshed and violence against the weakest.

According to the law, the outcasts of the most impoverished villages live only to serve the empire’s central shogunate.

Without any rights or hope for a better future, many of them will rebel against the shogun.

Shinobi: Heart Under Blade was very successful in Japanese theaters, establishing its place as the most-watched movie of 2005.

Unfortunately, it remained almost unknown internationally, remaining a rare pearl in the ocean of foreign films.

It was a sad waste of talent for one of the best fantasy films of recent years, full of spectacular fighting and intense moments of love and drama between the two main characters.

Killerman – On The Run Through New York City’s Streets