The Silencing – A Lonely Father With No Reasons To Live 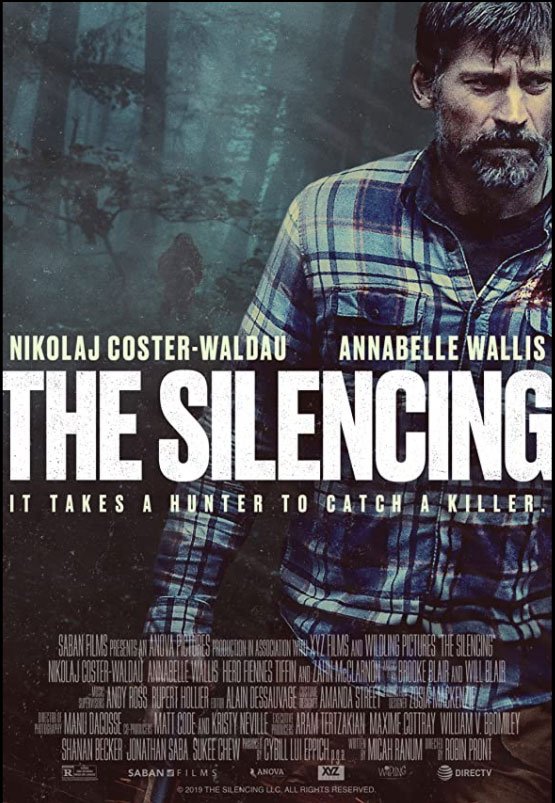 In 2020 comes from the Canadian woods of Ontario, a movie that combines thriller and family drama with simplicity and style, The Silencing.

This story begins with the police finding the body of a young girl, washed ashore by the river sometime after her disappearance.

No one can explain what could have happened to her except a man who lives alone, working as a guard for a nature preserve.

He firmly believes this is the play of a serial killer who had already killed before and recently returned to action.

Meanwhile, the local sheriff, a woman who knows this man and his drinking problems well, does not seem inclined to believe him.

So he decides to patrol the forest and watch through the park’s many cameras, which are usually helpful for tracking poachers.

His obsession leads to isolation since, after separating from his wife, he remains only grief over his daughter’s disappearance.

Indeed, the man believes that his little girl was a victim of the same psychopath. With shame, he recalls the abduction occurred when she was alone in the car while he was buying drinks.

His stubbornness increasingly alienates him from everyone around him, who believes that he is now completely losing touch with reality.

Until one day, on the cameras, he spots a girl fleeing dirty and terrified from a mysterious masked pursuer.

At that point, he rushes into the woods in an attempt to rescue her. Unfortunately, the attacker appears to be an expert hunter and also wounds him.

Therefore, the forest turns into a hunting ground just for them. The former father will play his endgame to avenge his daughter and try to prevent another murder.

A simple, natural, and effective thriller

Although it passed under the radar in 2020, The Silencing is a movie with quite an excellent continuous tension and few but decisive twists and turns.

Environments in the great basins of Sudbury, Ontario, play an excellent role alone. This beautiful nature has just the right atmosphere of desolation and struggles for survival.

The light is often less than natural because it is softened by huge tree foliage, giving a rural noir feel that never leaves the scene.

The characters’ psychology emerges indirectly from the dialogues, giving them an impulsive drive and turning one against the other.

This ethical and moral ambiguity will have profound consequences. Without warning, the good becomes dark in the difficulty, and instead, the courage of the most cowardly emerges.

Everyone fights for their reasons, which are not necessarily just in the service of justice, at least not that of the courts.

For both the killer and the protagonist, this hunt is not about collecting trophies; it is just a way to appease their demons.

In sum, 2020’s The Silencing is a solid movie that delivers what it promises to deliver. It is a thrilling hour and a half, rising and falling like a roller coaster, in a simple compelling plot.

The thriller works by taking off from the first few minutes and maintaining the proper suspense until the decisive twist. I do not want to spoil it by spoiling it for you, but it profoundly upsets some key characters.

I appreciate filmmakers who manage to be compact without making two- or three-hour movies. Also because that often means only stretching with unnecessary scenes and characters.

Everything happens without ridiculous exaggerations or action turns in which the protagonists suddenly become jungle Rambos.

Nikolaj Coster-Waldau is the story’s main protagonist, an alcoholic father abandoned by his family and society.

He struggles with the psychological breakdown of his daughter’s disappearance on his watch. As a former hunter who later became a forester, he is angry with everyone in town.

His ex-wife, new partner, and the police try unsuccessfully to stop his obsession with the investigation. But the hunt for the killer becomes his last chance for redemption.

Of all the police officers, the beautiful and determined Annabelle Wallis is the one who will take the most interest in his case.

Convinced that the girls’ disappearances conceal malicious purposes, she suspects a community of criminals among whom her brother also lives.

The latter is the young but talented Hero Fiennes Tiffin, who is truly admirable. Indeed, he achieves to creates an ambiguous and dangerous character with just a few scenes.

Equally ambiguous are the moral choices his sister must take to protect and save him from his dastardly lifestyle.

Robin Pront makes a compelling, low-budget film in natural locations. The beauty of the place provides excellent context along with some poor interior scenes.

Featuring a few capable actors, the director successfully delivers a simple but intriguing plot about a shadowy hunter-killer.

The Silencing earned minor in theaters, like all 2020 movies, because of COVID, but not only that.

Indeed, with better distribution, it could have risen in home video or streaming sales, but unfortunately, it did not make it.

It’s a shame and a waste, let’s face it. This thriller does not divide characters into good and evil, rather a gray area where everyone is guilty of something.

However, nothing prohibits us from reevaluating it today, so run to see it if you can; it will not be wasted time.

Men And Beasts Movies – The Arduous And Never Ending Challenge

3 Famous Movies made by Female...