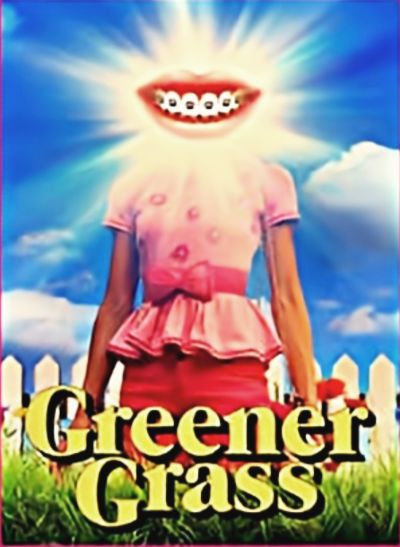 As in life, like in cinema, sometimes it takes a little craziness, and this 2019 Greener Grass is one of the craziest movies I have seen in recent years.

The story takes place in an imaginary affluent middle-class American neighborhood, seemingly as colorful and happy as a 1950s sitcom.

All the houses and people there want to be absolutely perfect, like the main characters’ great friends.

For example, one admires the other’s beautiful newborn baby girl during a ball game with their children.

As a kindness, the mother gives it to her, saying it will be hers from then on.

That absurd act will begin a whirlwind of situations that will lead to the total destruction of her life.

A mysterious and unexplained illness seems to strike her son, suddenly turning him into a dog.

The couple tries to accept this condition pretending he can go to school and be a child just as before.

Unable to accept giving away their child, the husband becomes increasingly detached from her.

Her friend seems to have no intention of returning her to him, heedless that her marriage is falling apart.

Finally, a strange lady seems obsessed with her, going so far as to place herself in her home and chasing her away.

With no one to turn to for help and nowhere else to go, the former perfect wife and mother begin a drifting journey toward the end.

Wanting to specify the feelings that 2019’s Greener Grass left me with, I found it to be a mix between the madness of John Waters‘ movies and Tim Burton‘s stylized, eerie aesthetic.

For example, the long line of elegant houses as perfect as silk is reminiscent of the falsely smiling society where Edward Scissorhands ends up.

On the other hand, the characters seem equally confused, almost as if they were perpetually drugged. But at the same time, they are equally determined to live in that obsessively unnerving way.

Equally disturbing is the short-circuit that occurs between us as viewers and what we witness. An uneasiness of absurdity that instead, for all the protagonists, is their ordinary everyday life.

Every aspect of the story is an exaggerated (but not even that exaggerated) parody of a certain kind of upper-class American society.

Yet the two women directors, who are also the protagonists, aim not to make us laugh openly but to smile silently in a demented way.

Even struggling to find a logical thread, the film flows placidly. Indeed, the pace grows like a small stream that eventually becomes a rushing river.

This sense of disorientation does not confuse, yet it creates a strange mood, as in David Lynch‘s old Twin Peaks.

Therefore, we can say that the purpose of the narrative is not to tell. Instead, it wants to feel the latent degradation of a seemingly perfect world on the protagonist’s skin.

Greener Grass, unfortunately, came out at an unfavorable time like 2019, making it difficult to distribute an already uncommon and different movie.

I noticed that I was not the only one who enjoyed it and wanted to talk about it. There are many positive opinions on the Internet therefore I hope it can revive in time.

As mentioned, writing and directing this crazy all-American comedy are the two lead actresses, Jocelyn DeBoer and Dawn Luebbe.

Actually, Jocelyn DeBoer is the one who has the most space and on whom the whole story is most focused.

She is a gorgeous woman who lives the American dream one hundred percent, at least apparently.

What can fail by having a beautiful home, a rich and faithful husband, and her beautiful children?

To lose precisely all these things, one by one, as suddenly as irretrievably without any understandable explanation.

It all stems from her dastardly decision to give her infant daughter to her friend, the equally hallucinated Dawn Luebbe.

This woman’s life, however, seems an unsuccessful reflection of her friend’s life, which she tries to imitate with little result.

From this simple premise comes a maelstrom of unbelievable yet entertaining and exciting situations compared to other directors’ early works.

The formula for success is always sticking to the same surreal comedy style. One way or another, the story never strays from this unique atmosphere.

I hope to witness more surreal plays by these female directors whatever path they take in their future, whether they stay together or work alone.

Indeed, Greener Grass is a rare example of social satire that hits the mark in 2019 while being a movie of joyful comic levity from the first minute to the last.

For audiences accustomed to the usual politically correct comedies, I think it could be a good turning point to watch something different, which I believe will become a cult in time.

The Silencing – A Lonely Father With No Reasons To Live