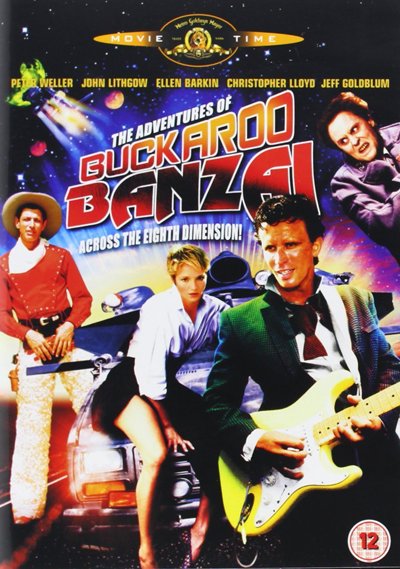 Buckaroo Banzai is one of the heroes of the trash genre dated 1984, in a movie half as loved and remembered as hated and denigrated by others.

Why this is so is quickly said. Indeed, it best sums up the kind of cinema made with little money but lots of talent and imagination.

The hero of this story is a true one-of-a-kind idol. He is both a famous surgeon and a racing driver, as well as a scientist and a rock star.

In his spare time, he also saves the planet with his loyal band of warriors/musicians, The Hong Kong Cavaliers.

It all begins with Banzai carrying out a dangerous experiment to exploit the empty spaces between the elements of matter.

He intends to cross a mountain in a supersonic car to prove a theory that would revolutionize every scientific field.

The mad dash succeeds perfectly, except he carries an unidentified organism across the hard rock on the way back.

However, the inconvenience proves that solid matter is traversable, and creatures of all kinds even live in it.

Unfortunately for him and the entire human race, this dimension is also a prison. Indeed, some aliens locked up one of their ancient and dangerous enemies long before.

Except after the experiment, everyone knows that it is possible to cross that barrier. So hostile aliens and a mad human scientist will try anything to rid the ancient threat.

The genius of childish naivety

When we talk about Buckaroo Banzai, we keep in mind that we are talking about a great cult movie for the 1984 generation.

For example, even Steven Spielberg pays homage to it. Indeed, in his recent Ready Player One, he has the protagonist dressed up as Banzai to go clubbing virtually.

Sadly, some public did not realize and did not want to comprehend the beauty in such a kind of work.

I understand the beauty of more expensive special effects. I do not deny that they are often magnificent to watch, especially in the cinema.

Still, a movie’s soul lies in story and characters, within the atmosphere the director W. D. Richter chooses to give the whole setting.

Buckaroo Banzai is a zoo of quirky and lovable characters and unlikely but equally fascinating and unforgettable situations.

Its magic lies in combining the absurdity of a multidimensional plot with poor but highly imaginative staging.

The backdrops of spaceships or laboratories are of cardboard and plastic, like a child having fun with his toys.

Yet it is precisely this kind of childlike imagination that makes cinema a great collective daydream.

Probably Buckaroo Banzai was punished for being a playful and deliberately silly movie, too ridiculous for many in 1984.

However, cinema is also about seeing the world naively as if we were children, something that, sadly, so many have either forgotten or never knew.

Today’s stars as they were yesterday

In addition to the direction above and aura of childlike genius, Buckaroo Banzai counts on a cast of phenomenal 1984 future movie stars.

Here, however, he is a romantic and adventurous dreamer, unafraid of danger and able to melt a woman’s heart with a song.

Not surprisingly, this is how he makes Ellen Barkin fall in love, singing Since I Don’t Have You to her just before her attempted suicide.

Initially confused and irritating, the beautiful actress will become his faithful soul mate who will follow him to the climax in the final fight against the aliens.

John Lithgow leads these invading villains, one of his generation’s best and most accomplished actors, in an irresistible off-the-wall performance.

Along with him is another 1980s legend, Christopher Lloyd, who would shortly become the brilliant and histrionic Dr. Brown from Back to the Future.

Finally, let’s also remember the protagonist’s band, The Hong Kong Cavaliers, with familiar faces such as the fantastic Clancy Brown and Jeff Goldblum.

In short, this movie has everything to please everyone, provided you can accept its poor and naive side of genius.

You need not look for logical coherence in the narrative of this rambling adventure because you will never find it.

I can only suggest not to stop at appearances, letting yourself be carried away by the madness of a world that will set you adrift far from what you thought cinema was all about.

Revenge Of The Machines – Good Movies With Evil Robots