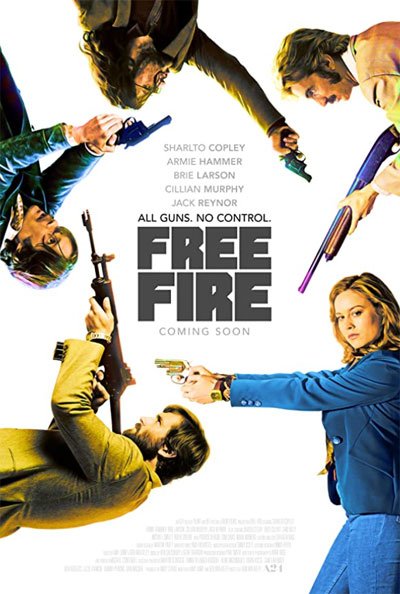 When you want to see a movie among many people with different tastes, 2016’s Free Fire might be the solution to bring everyone together.

Indeed, the story crosses and traverses many genres, from comedy to action, through a strange, gun-toting classic theater.

The premise is a meeting between two small gangs who meet in an abandoned warehouse to finalize a gun deal.

The transaction should be quick and easy, but mutual dislike quickly arises between these stupid, vulgar, and violent criminals.

Each of them resents the others’ methods and attitudes, while a girl who mediates barely manages to keep them calm.

Moreover, mutual distrust increases when the buyers discover that the weapons differ from those they had made previous arrangements.

Eventually, when two of them recognize each other from a quarrel from the night before, a furious fight involves everyone.

The fistfight quickly escalates when they pull out their weapons, ending in a shootout with numerous injuries on both sides.

Furious, bleeding, and well-armed, none seems to want to take a step back to reconcile the situation.

With no escape from the warehouse, everyone is adamant about killing each other, while the police are also incoming.

Free Fire is a little-known 2016 pulp action movie with a throbbing Mexican standoff between exaggerated and hilarious characters.

At that moment, all their differences in elegance, intelligence, ignorance, and ugliness vanish into thin air.

Under gunfire, everyone democratically becomes aching bodies struggling to survive, receiving a bullet every time they try to move.

The gunfights are spectacular and funny at the same time, with the same macabre humor as in films like Reservoir Dogs.

The warehouse where they should have closed the deal becomes a universe on the verge of inevitable collapse.

Beginning with a silly, petty argument, the underlying nastiness inherent in the protagonists comes unchecked.

Although divided into two barricades, they fight each other regardless of which gang they belong to.

The jokes and dialogue are funny and clever. In the movie’s hour and a half running time, they provide many reversals of situations and roles.

Likewise, the direction manages to be fast and dynamic while remaining in the same warehouse.

Sure at one point, the carnage perhaps reaches an improbable level, but the show is so much fun that you won’t care.

A cascade of bullets then joins the river of words in waves of fury and resentment. So much so that, in the end, the protagonists do not even remember how that mess began.

In the landscape of international movies all alike in imitating Tarantino’s style, 2016’s Free Fire is, without a shadow of a doubt, one of the few that succeeds.

A stylish director and an excellent cast for guaranteed entertainment

The film is a tragic dance of death filled with international stars, which stands out as Cillian Murphy and Brie Larson.

At first, they seem the most rational of all the eccentric lunatics they are surrounded by, and it even appears that a romance is possible between them.

In contrast, Michael Smiley and Sharlto Copley play the two gang leaders with opposite pride.

Both have an authoritarian and irritating attitude in their disdain for everyone else, letting their prejudices lead to the death of all their men.

Finally, the character of the drug addict and hapless Sam Riley, the spark that starts the fire between the two gangs, is amusing.

Recognized for scarring a rival’s sister, he insults and taunts his enemies, sparking the ruckus.

Ben Wheatley confirms his talent for directing films with mean characters by stylizing them a perfectly cinematic way.

His commitment to writing exploded at the highest level with Kill List and continued with other great works such as High-Rise or A Field in England.

These stories are very different in genre, development, and content.

As is always the case with actual authors, they are linked to the grand and realistic vision of their worlds and characters.

The naked nastiness of his dialogue is always perfectly balanced with a story capable of captivating from the first moments.

Free Fire was not a commercially successful movie, earning just over $3 million against a budget of $7 million.

Nevertheless, Wheatley remains a filmmaker who needs our help to enhance his reputation and help him continue his outstanding career.

Roxanne – From France to America with love and fun

Revenge Of The Machines – Good Movies With Evil Robots

The Belko Experiment – When the...